Meghan Markle is ‘wrangling’ US public with title says Cohen

Polling stations opened across mainland France for the first round of the presidential election today. Emmanuel Macron and Marine Le Pen are the frontrunners among the 12 candidates. If the incumbent is successful, he will be the first French president to win re-election since Jacques Chirac.

Throughout the election campaign, Mr Macron’s wife and First Lady has been the topic of media coverage.

Brigitte, who turns 69 next week, is more than 24 years older than her husband.

Their relationship is said to have begun when Mr Macron was 16 and Brigitte, a teacher at his school, was 40.

Despite an unconventional start, the couple have maintained a close relationship. 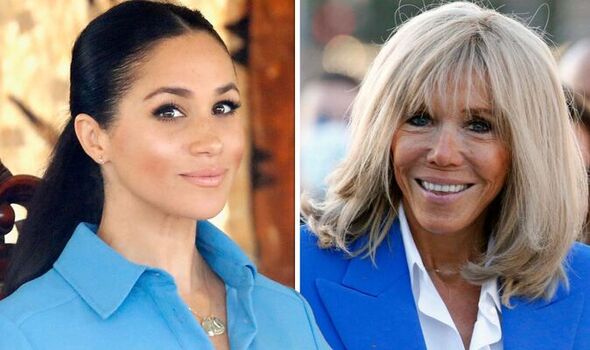 Emmanuel and Brigitte Macron after voting in the first round of the presidential election today. (Image: LUDOVIC MARIN/AFP via Getty Images)

In 2021, political biographer Gaël Tchakaloff gave a rare glimpse into their marriage. In her book, ‘Tant Qu’on est Tous les Deux’ (“While We’re Alone”), she wrote: “My book is not a political book, it’s a book about love.

“When I saw them [Emmanuel and Brigitte Macron] together — and they were often together — they were always touching and kissing each other on the cheek.”

Writing in the 2018 biography ‘Harry: Conversations with the Prince’, Angela Levin quoted Mr Starkey, who said: “Meghan is a kind of Madame Macron, only better looking.

Meghan and Harry stepped down from their roles in the Royal Family in 2020. (Image: Ben Birchall – WPA Pool / Getty Images)

“Touchy-feely is the new way and I believe Meghan will be the one to set the royal rules.”

She wrote: “It was a royal official event like no other.

“Their overt lovey-dovey behaviour had never been seen at a royal engagement before and it felt more like watching a scene from a Hollywood feel-good love story than a reserved inner city walkabout.”

Meghan and Harry during their walkabout in Nottingham. (Image: Karwai Tang/WireImage)

She added: “They put their arms round each other.

“Meghan also clung on to Harry’s arm and stroked his back.”

Ms Levin suggested that the physical contact from Meghan could be seen as “motherly”.

She said: “Did she need the physical contact to help ease her nerves or was she just being motherly as she had been during the BBC TV interview on the day their engagement was officially announced?”

Meghan and Harry got engaged in 2017. (Image: Karwai Tang/WireImage)

Later in the book, Ms Levin claimed that a young Harry required “lots of reassurance and understanding” as a child, and “even today he sometimes has an air of vulnerability and sadness.”

She added that it’s “perhaps why Meghan Markle sometimes feels the need to be motherly towards him.”

Similarly, the First Lady has been described as a motherly presence in Mr Macron’s life.

A Macron insider told the Guardian in 2017 that Brigitte “is very protective of him”.

Brigitte has been a regular fixture in the French Ministry since she quit her job in 2015 to support her husband’s career.

During his first presidential election campaign, Mr Macron gave the impression that her presence beside him was non-negotiable.

He told reporters at the time: “Her view matters to me.”

“One can’t work when one’s not happy.”

This team dynamic is echoed in the bond between Harry and Meghan.

The couple stepped down from their roles as senior royals in 2020.

Meghan and Harry have not returned to the UK together since their exit. (Image: Dia Dipasupil/Getty Images)

Last month, royal author Nigel Cawthorne told OK! magazine: “It’s Harry and Meghan against the world, or them against the British establishment.

“But when couples go through a shared problem, it does tend to make them stronger.”

Angela Levin’s book, ‘Harry: Conversations with the Prince’, was published in 2018 by John Blake. It is available to buy here.

Gaël Tchakaloff’s book, ‘Tant Qu’on est Tous les Deux’ (“While We’re Alone”), was published in 2021 by FLAMMARION. It is available to buy here.

Will never fly again! Elderly couple 'abandoned' for hours after landing at Manchester