Lots has changed in Europe since Ms Merkel’s departure from power last December. In Ukraine, security is at risk; its neighbouring countries wonder how a full-scale invasion of Kiev would impact them; and in Germany, the ambitious Nord Stream 2 project has just been frozen. Professor Matt Qvortrup, author of Angela Merkel: Europe’s Most Influential Leader, said if the former German chancellor came in “as a mediator”, Vladimir Putin would feel “respected” – which according to the political scientist is at the heart of what the Russian president is looking for.

In a televised address to the nation on Monday, Mr Putin announced the recognition of rebel-held Donetsk and Luhansk, in Eastern Ukraine, as independent entities.

After his lengthy speech, in which he claimed “modern Ukraine was entirely created by Russia”, he ordered troops into the two breakaway regions.

In doing so, although Mr Putin tried to justify the move by saying the Kremlin’s forces were going to act as “peacekeepers”, he disregarded Moscow’s commitments under the Minsk agreement, a peace deal for which Ms Merkel is largely to credit.

Prof Qvortrup, from Coventry University, argued: “Merkel was the one who negotiated a kind of truce.” 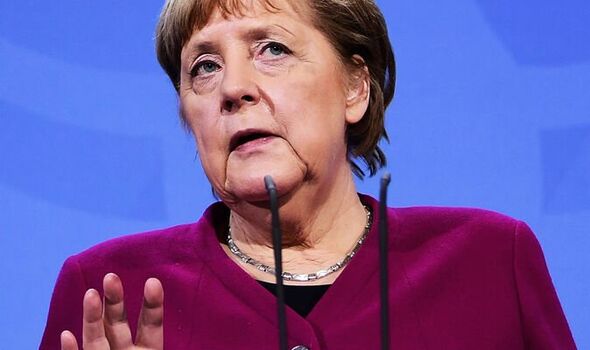 Could Angela Merkel return to politics? It would be a ‘game-changer’, her biographer believes (Image: Getty)

In a bid to secure a ceasefire between Ukrainian government forces and Russian-backed separatists in the Donbas region following the annexation of the Black Sea peninsula, Germany and France scrambled to negotiate with Mr Putin.

François Hollande was in office in France at the time. But Ms Merkel, a Russian speaker, was the go-to figure for the Kremlin, Prof Qvortrup told Express.co.uk.

He added: “She was also the one who was instrumental in getting Russia kicked out of G8, which then became G7, and she was the one who spearheaded the sanctions back then.

“So it is not as if she is very friendly with Russia but she is very respected – probably because she was tough before.”

That toughness, he suggested, is the key to Ms Merkel’s leverage over Mr Putin.

Speaking of the German political scene, Prof Qvortrup, an expert in constitutions, democracy and comparative politics, painted the picture of a “quite pragmatic” rather than “idealistic” foreign policy strategy, which he thinks is a logical by-product of being “in the middle of a continent with loads of enemies around you”.

He said: “You look at what is most likely to keep calm for a long time.”

Some 16 years steering Europe’s top economy taught the former chancellor how to gain her counterparts’ respect to the point her involvement in any matter meant those in the same room were being respected, too.

Hence, he explained, Merkel’s role as a negotiator in Mr Putin’s row with NATO “would signal to the Russians that they are being respected, that they get arguably the most respected political leader in Western Europe in the past 20 years to negotiate”.

But Ms Merkel also showed the Kremlin she “wasn’t willing to allow them to get away with murder”, the professor emphasised, suggesting her presence would tell them “they mean business”.

As the world’s biggest players announce sweeping packages of sanctions in response to Moscow’s escalation, much is at stake for Germany.

The Nord Stream 2 pipeline, which has been at the forefront of Berlin’s approach to the crisis, has been halted.

Owned by Russia’s state-backed energy giant Gazprom, it runs from western Siberia to Germany and doubles the capacity of the already-in-use Nord Stream 1 pipeline.

Construction was completed last September but regulators were yet to give it the green light to operate, which is for now not to come as a required security-of-supply assessment was week instructed to be cancelled.

And without said assessment, granted under the tenure of Ms Merkel, the pipeline cannot receive authorisation.

Chancellor Olaf Scholz said at a press conference: “This may sound technical, but it is the necessary administrative step without which the pipeline cannot be certified.

“Without this certification Nord Stream 2 cannot go into operation.”

But considering the pipeline could have heated 26 million German homes at an affordable price, it seems to be in Berlin’s best interest to defuse tensions, avoid war, and get back the chance to use more of Russia’s gas.