Gigi Hadid showed off her very trim frame as she made her way to the Met Gala on Monday evening in an extremely tight-fitting PVC ensemble.

The 27-year-old model – who welcomed her first child Khai with ex Zayn Malik in February last year – looked striking as she left the Mark Hotel on her way to fashion’s biggest night in New York City.

The outfit left almost no room to maneuver as even the model’s hip bones were seen protruding through the mid-section, just below her corseted waist. 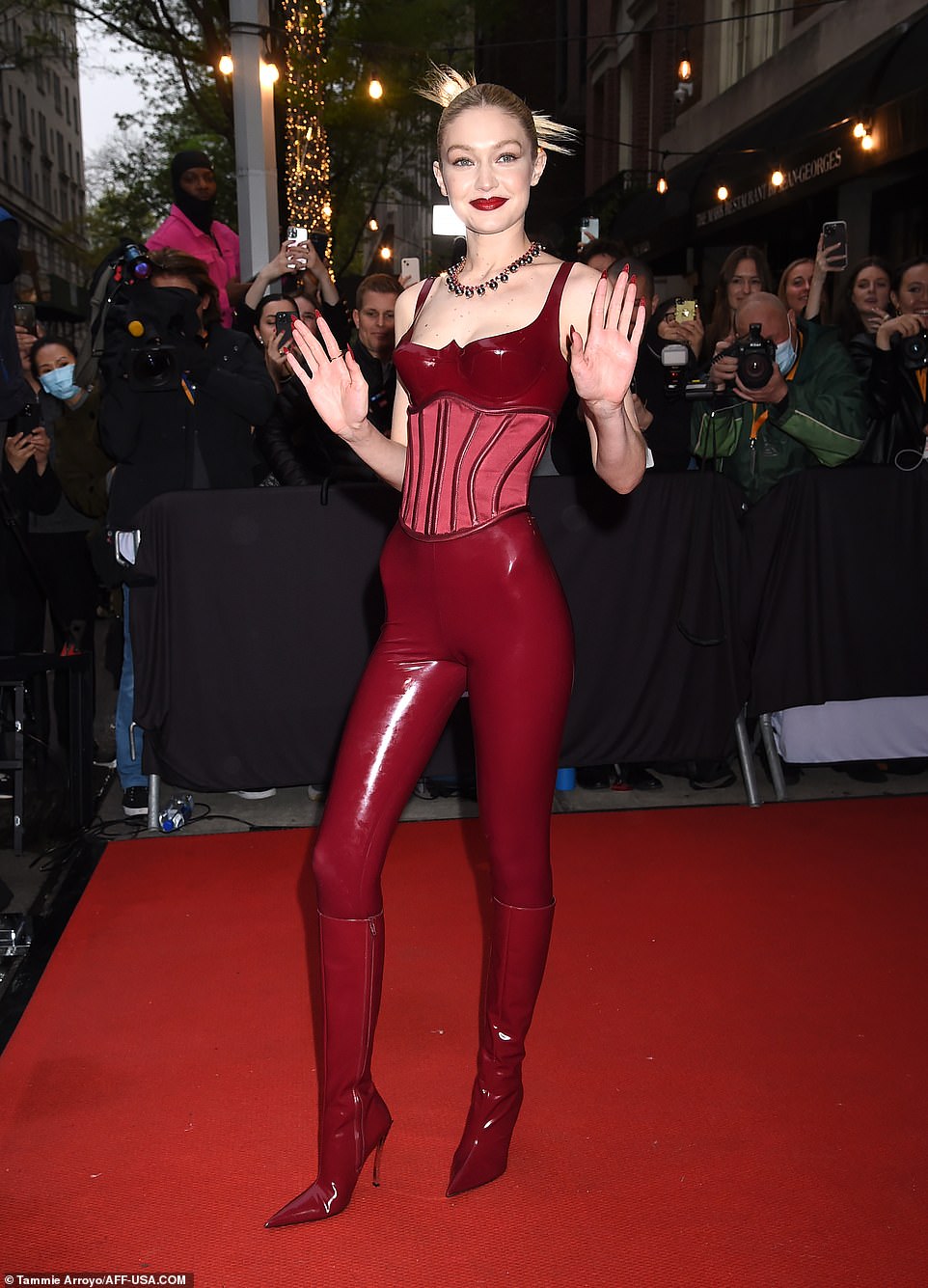 Striking: Gigi Hadid shows off her VERY trim frame and protruding hip bones in corseted PVC ensemble as she makes way to the Met Gala on Monday

The blonde beauty had a burgundy lip that matched her outfit’s overall color scheme, as well as a silver beaded necklace.

Gigi became a first-time mother to daughter Khai Hadid Malik last year, but has since gone her separate ways with the baby’s father Zayn.

The pair became estranged after an alleged altercation with her mother Yolanda Hadid.

Striking a pose: The 27-year-old model – who welcomed her first child Khai with ex Zayn Malik in February last year – posed outside of the Mark Hotel for the MET Gala 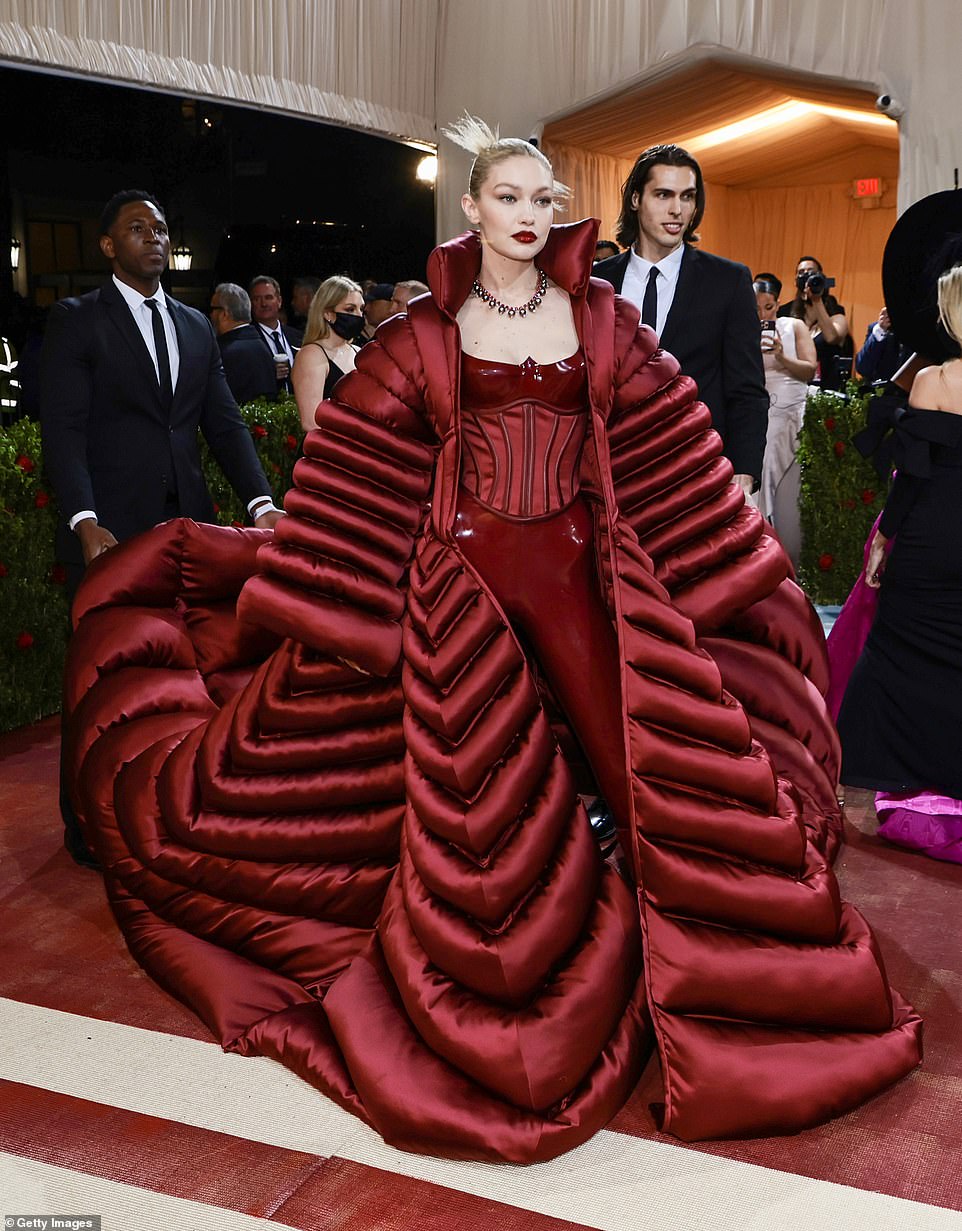 Grand entrance: When she arrived at the Met Gala, Gigi had covered herself with a large coat

The Metropolitan Museum of Art Costume Institute Benefit is considered by many as the ‘Super Bowl of celebrity red carpets.’

It’s traditionally held the first Monday in May to raise money for the Costume Institute in New York City, but last year’s event moved to September due to the pandemic.

This year’s dress code is ‘gilded glamour’ to match the theme of ‘In America: An Anthology of Fashion,’ a continuation of last year’s ‘In America: A Lexicon of Fashion.’ 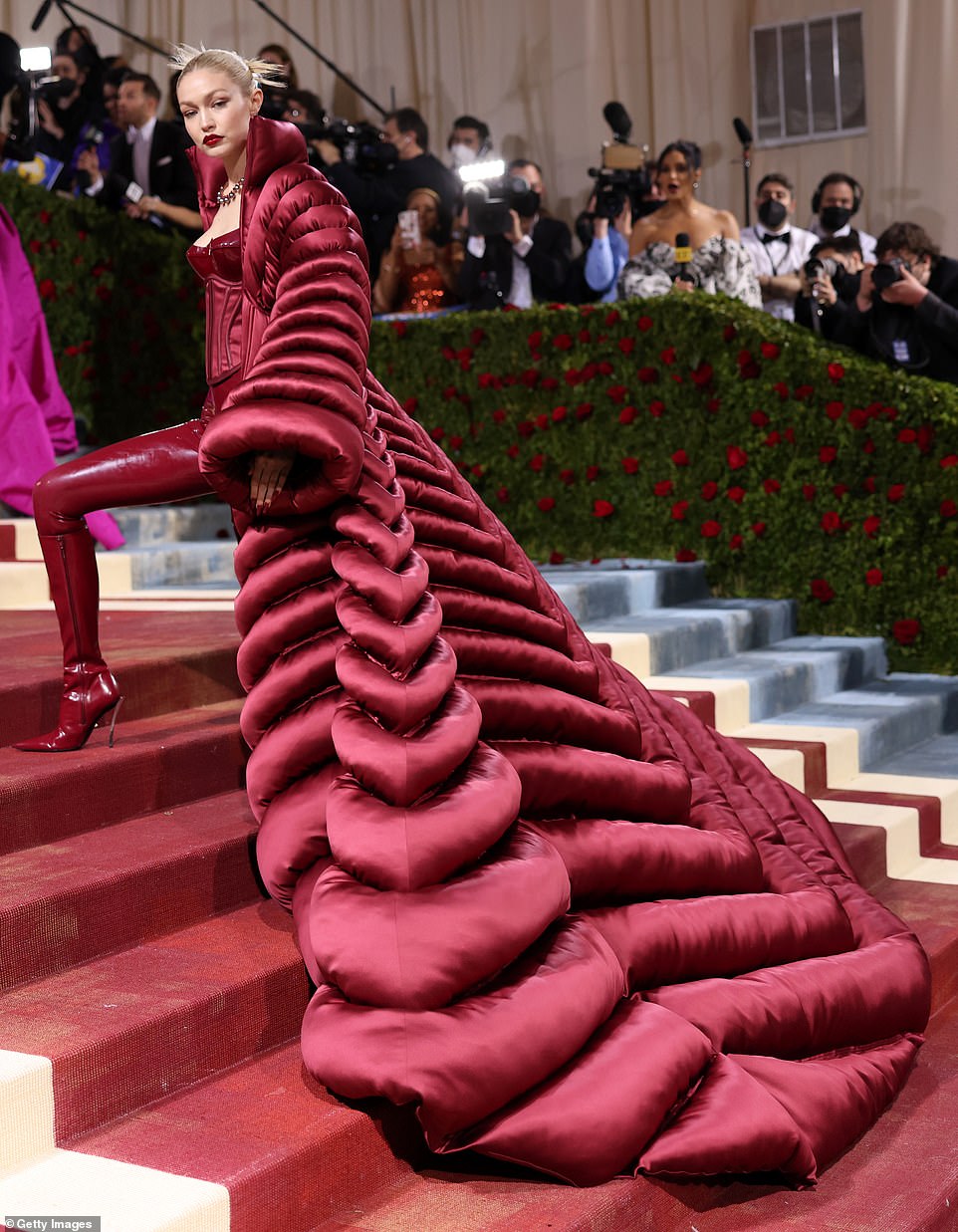 Supermodel steps: The pro glided with ease on the red carpet steps 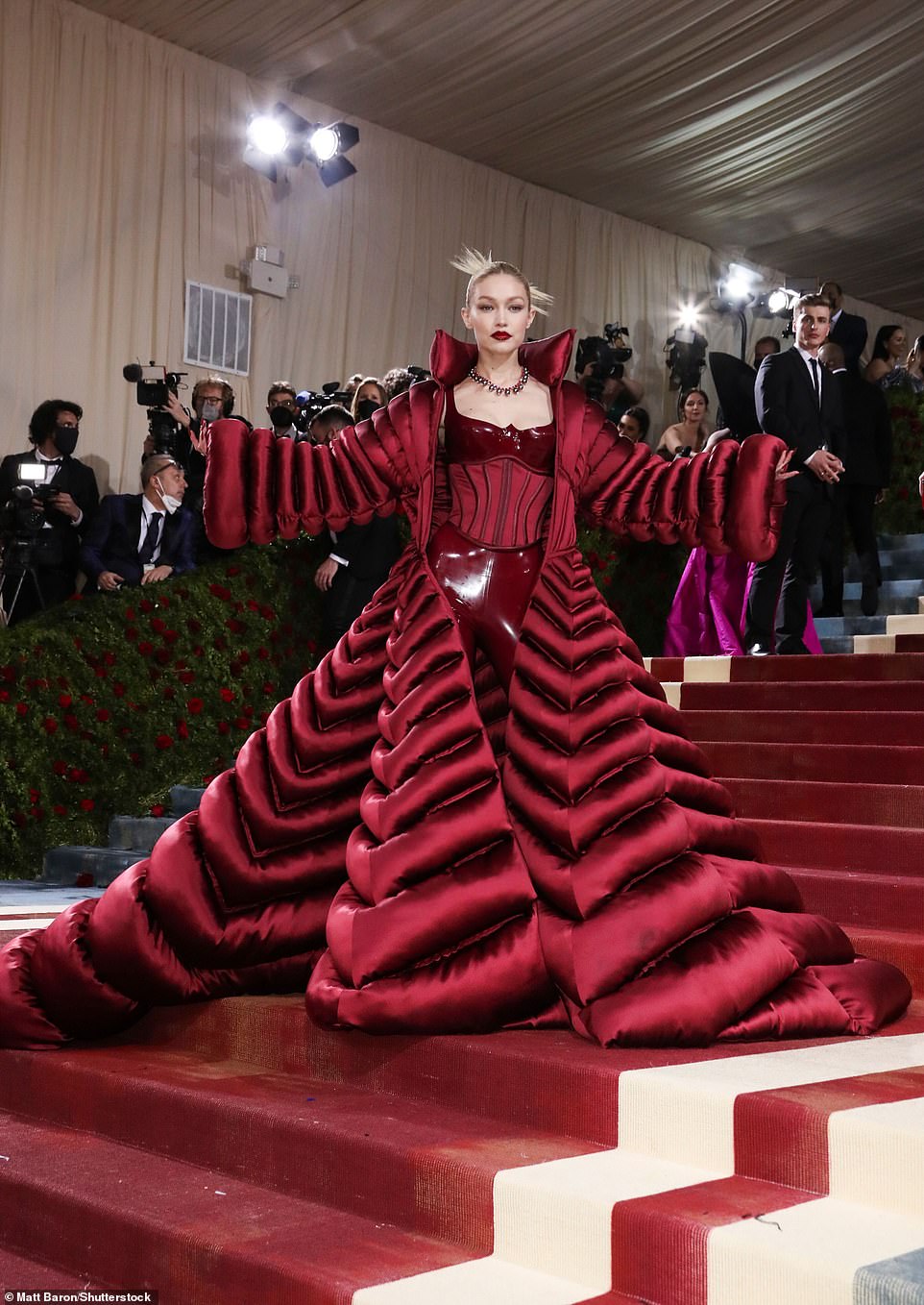 I’ve arrived! Gigi held out her arms to show off her grand ensemble 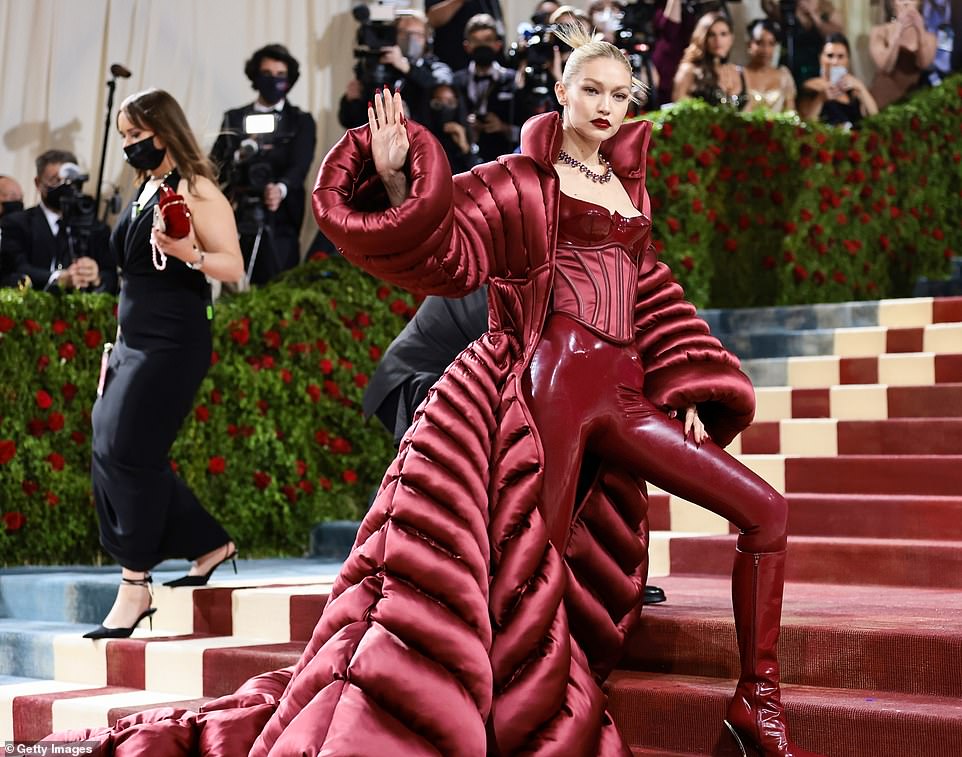 Toodles! Gigi waves to the cameras before sashaying off inside the event

This will be Miranda’s first time as a Met Gala co-chair (and guest) but he was originally intended to co-host the 2020 edition before the pandemic forced its cancellation.

As usual, the sartorial theme comes from the exhibit the gala launches: ‘In America: An Anthology of Fashion,’ which is the second of star curator Andrew Bolton’s two-part show exploring the roots of American style. 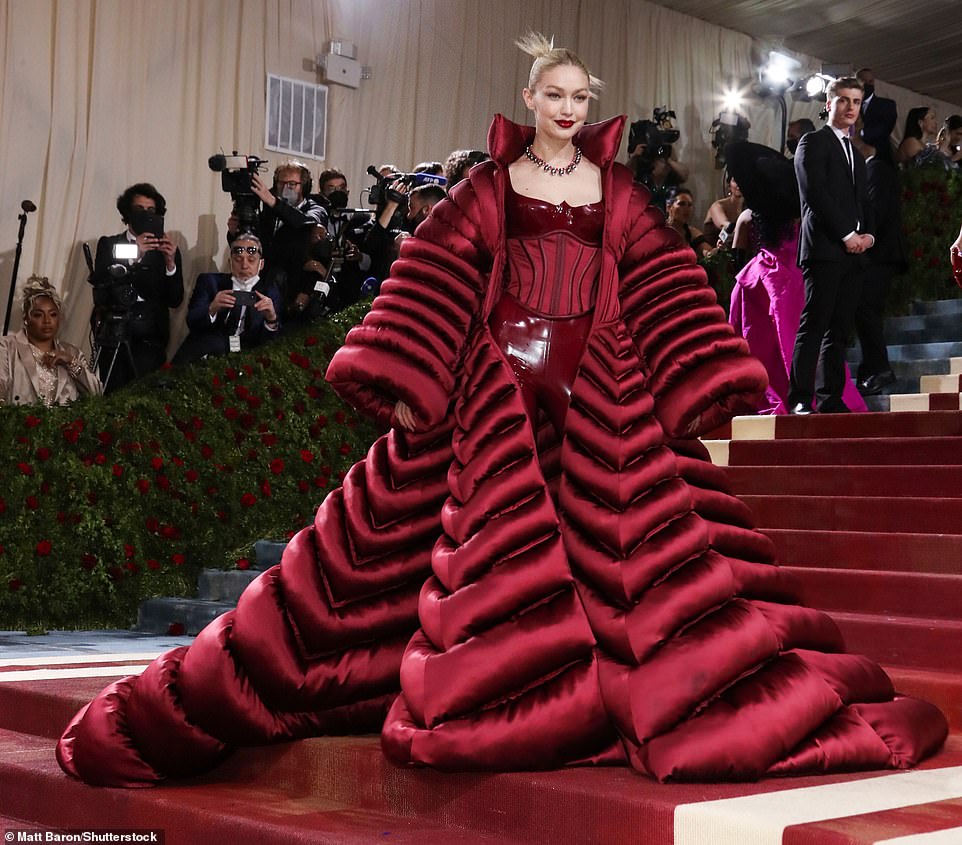 Taking up space: The star almost shut down the red carpet with the addition of her large coat

Bolton said eight directors will create what he called ‘cinematic vignettes’ in the period rooms of the American Wing of the museum.

Similar to the September event, there will be 400 guests this year, lower than the pre-pandemic highs of 500-600 attendees. 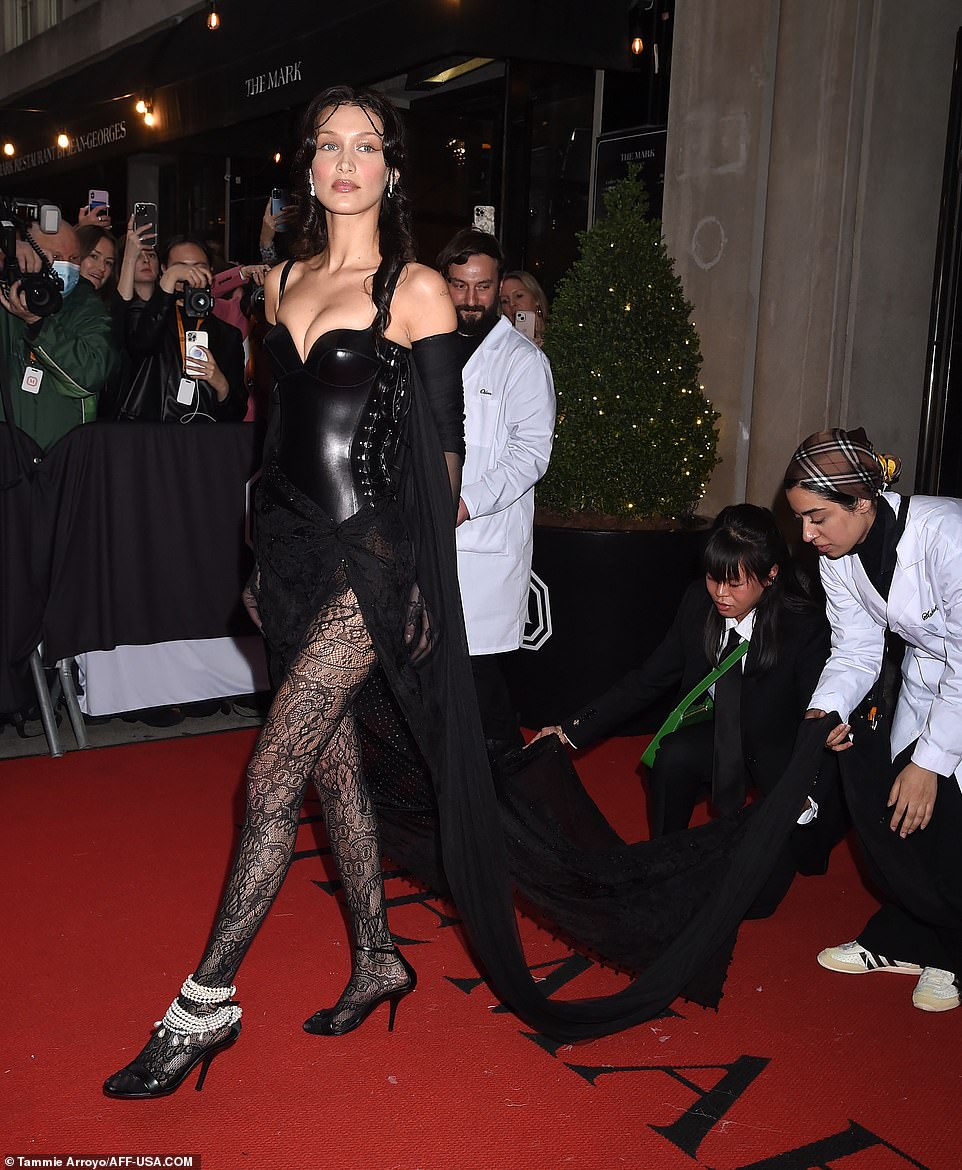 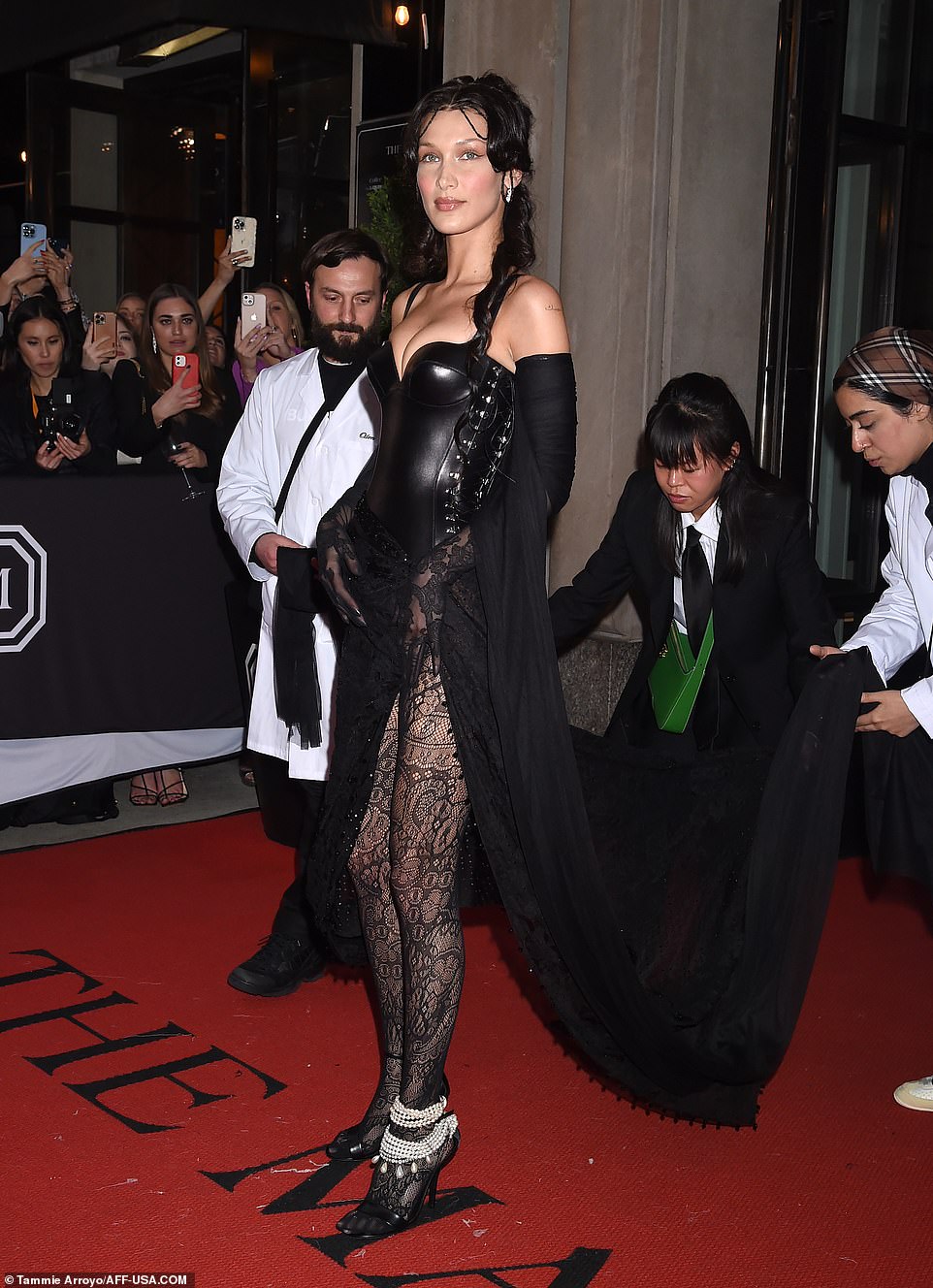 Helpers: Bella was seen being attended to by members of her team as she made her way to the MET Gala 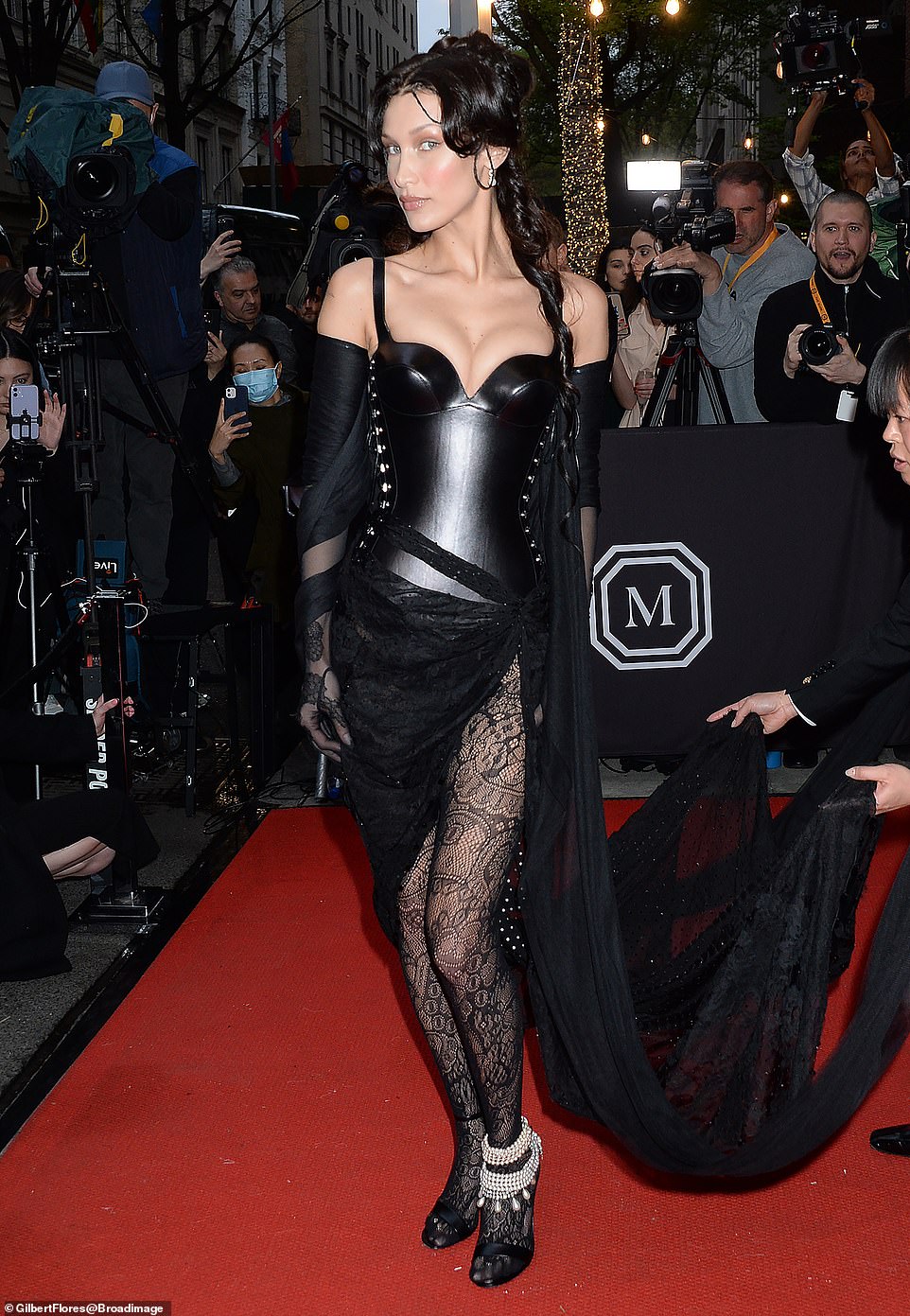 A tale of two looks: Bella’s ensemble was strikingly different to her sister’s look

The other four are Ford, the celebrated fashion designer who’s also an acclaimed film director, Janicza Bravo (Zola), Julie Dash (Daughters Of The Dust) and Autumn de Wilde (who directed the Jane Austen adaptation Emma. and is also a photographer).

The first part of the exhibition will remain on display in the rooms of the Anna Wintour Costume Center, along with the second part, until September 5.

More than half the pieces in the opening exhibition will be rotated out and garments from designers not yet featured will go on display.

The Met Gala is a huge money-maker for the museum, and provides the Costume Institute with its main source of funding. 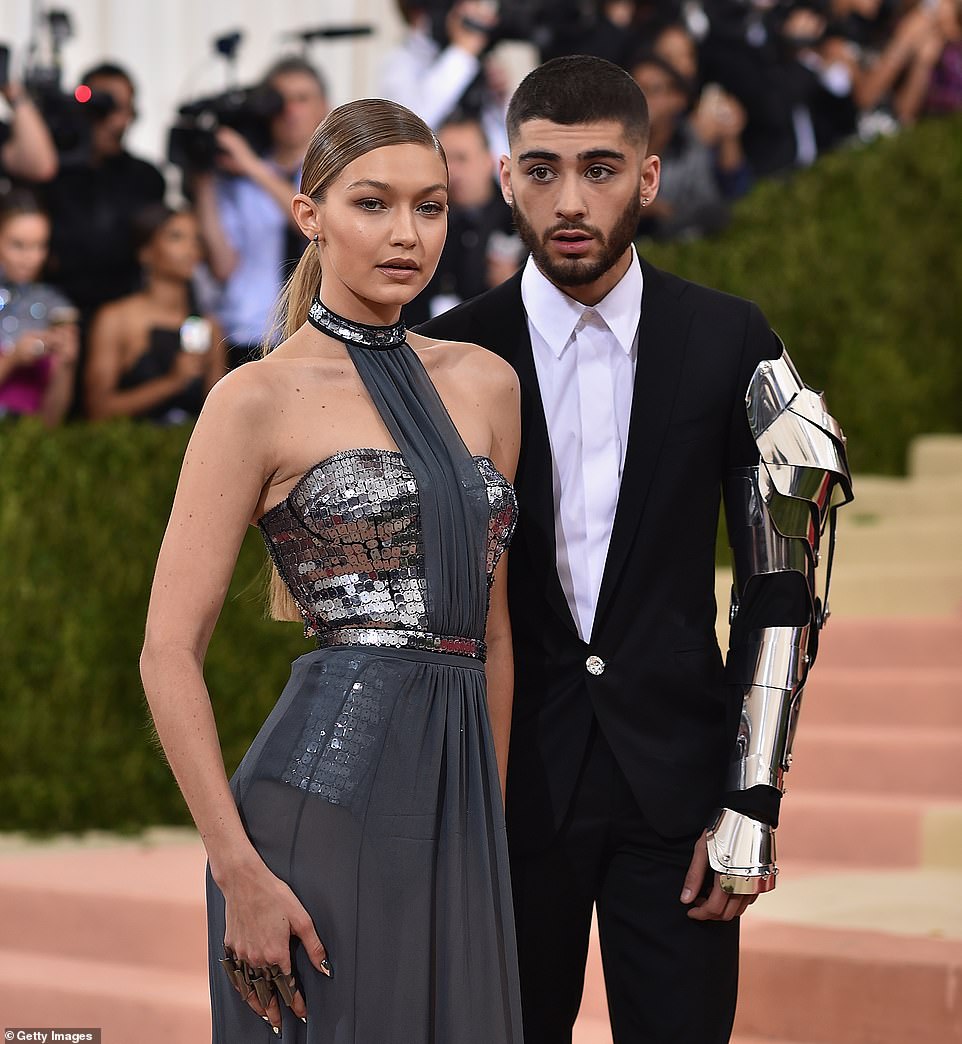 Co-parenting: Zayn and Gigi – pictured at the 2016 Met Gala – are thought to have split up last year following an alleged altercation between Zayn and her mother Yolanda Hadid