By Geraint Llewellyn For Mailonline

She reportedly split from Romeo Beckham recently after three years due to the ‘pressures’ of navigating a long distance relationship.

But Mia Regan, 19, appeared to be looking on the bright side Tuesday as she shared a fun video to her Instagram Stories.

The model went bra less in a stylish ensemble, flashing a glimpse of her toned midriff before cheerfully pulling on a knitted hat complete with bunny ears. 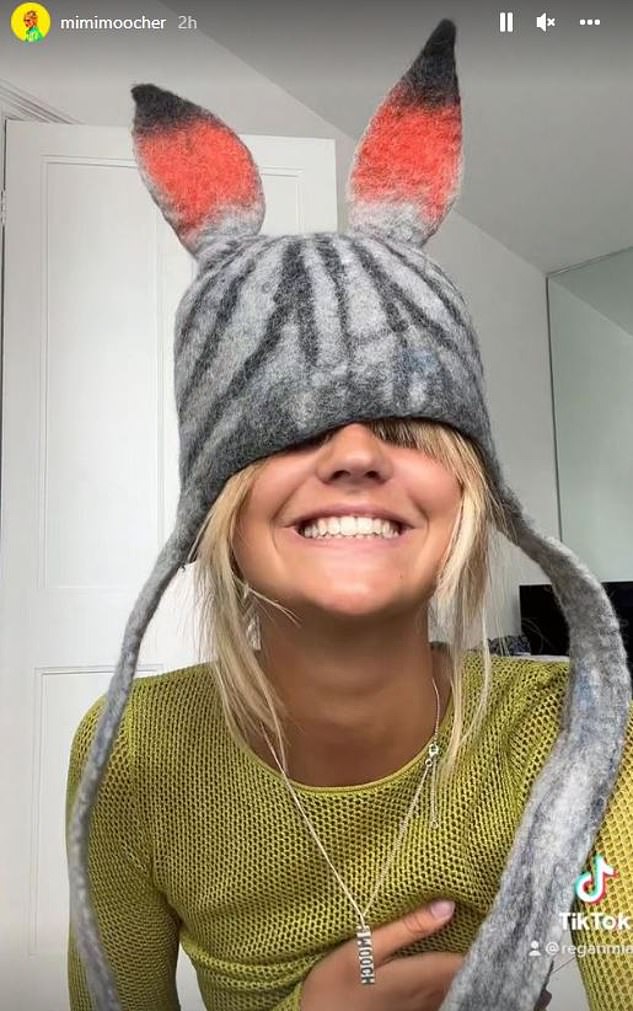 In the Tik Tok clip the statuesque stunner wore a semi sheer chartreuse jumper which she teamed with a silky orange tie-dyed skirt and cowboy boots.

Mia covered her modesty with her forearm as she twirled for the camera, showing off her toned tum and pierced naval.

The star wore a simple make-up look as the bright outfit accentuated her sun kissed skin.

Accessorising the look with a simple silver pendant the model wore her golden tresses pinned back as strands framed her beautiful face.

After showing off her stylish look Mia then donned the funny hat as she pulled a funny face for the camera. 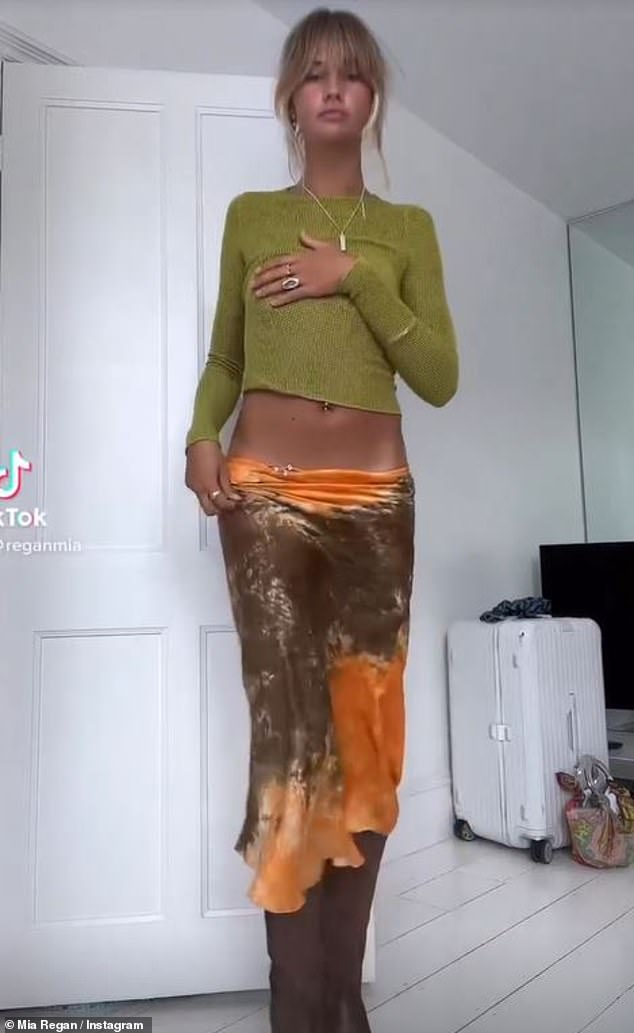 Fun: The young model let her hair down in a playful clip added to social media on Tuesday

Twirl: In the clip the statuesque stunner wore a semi sheer chartreuse jumper which she teamed with a silky orange tie-dyed skirt and cowboy boots 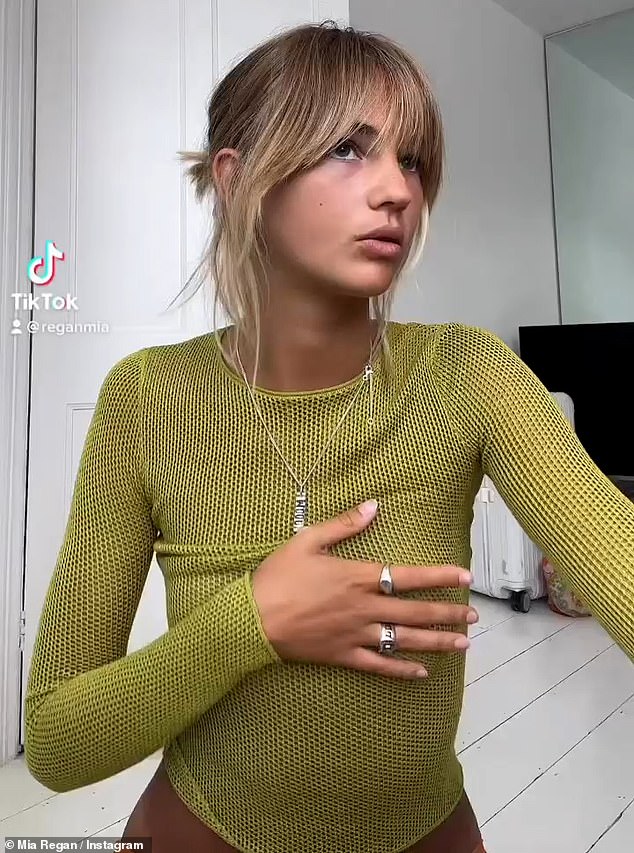 Gorgeous: Accessorising the look with a simple silver pendant the model wore her golden tresses pinned back as strands framed her beautiful face

The London-based model’s last post to include her former boyfriend came more than two months ago, when they celebrated their three year anniversary on May 3.

Sources confirmed the couple parted ways due to the inevitable pressure caused by their conflicting work schedules, with Romeo spending much of his time in the United States while he pursues a football career.

A source told MailOnline: ‘Essentially the long distance relationship at their young ages took its toll. Romeo and Mia are both lovely young people, they’re very fond  each other and the family love Mia. 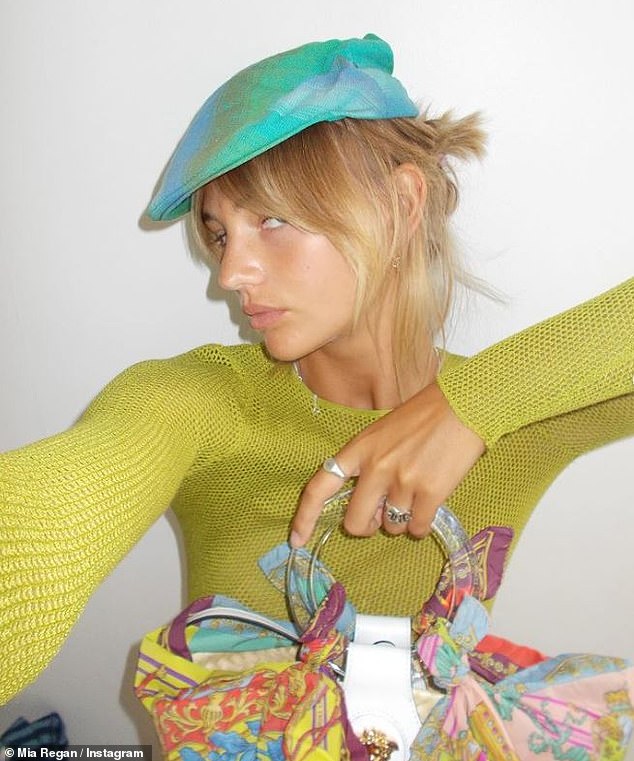 Runway ready: Mia then added a cerulean flat cap to the ensemble as she held a designer bag in front of herself

‘She’s continuing to collaborate with Victoria Beckham through her work, but sadly Romeo and Mia aren’t together anymore.’

Romeo is currently playing as a midfielder with Florida based Inter Miami II – the club his father David Beckham co-owns – while Mia is primarily based in London.

The source added: ‘He’s focused on his football and living in Miami and she’s in the UK, working on her modelling and influencer career. 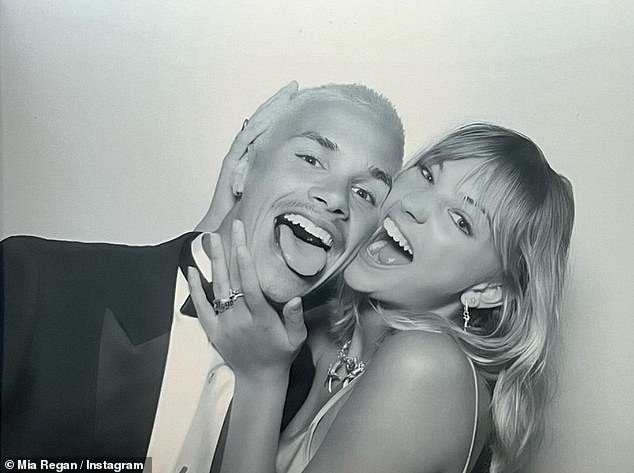 All over: Romeo and Mia ended their three year relationship after the strain of managing a long term relationship took its toll on the young couple

‘It’s amicable. The pair still support each other in their respective careers and she recently commented on him scoring for his club.’

The Inter Miami II footballer regularly shares pictures of Mia on social media but his followers couldn’t help but notice they had vanished from sight on Monday afternoon.

One fan account wrote on Mia’s Instagram: ‘Romeo broke up with you? He deleted all pics of you on ig,’ while another wrote on a fan account:  ‘Did they break up?’

Romeo last featured on model Mia’s Instagram account more than two months ago, when she celebrated their anniversary as a couple in May.

Sharing a handful of images – including one of their matching love heart tattoos – she wrote: ‘I love you 5eva… three years around the sun wit uuuuuu.’

Meanwhile Romeo has devoted recent social media posts to friends and family, with his latest a tribute to his dad, former Manchester United and England footballer David Beckham, following his goal against Orlando City B on Sunday.

However, Mia did comment with a star emoji on Romeo’s most recent post on Monday, while he also ‘liked’ her most recent snap from Friday. 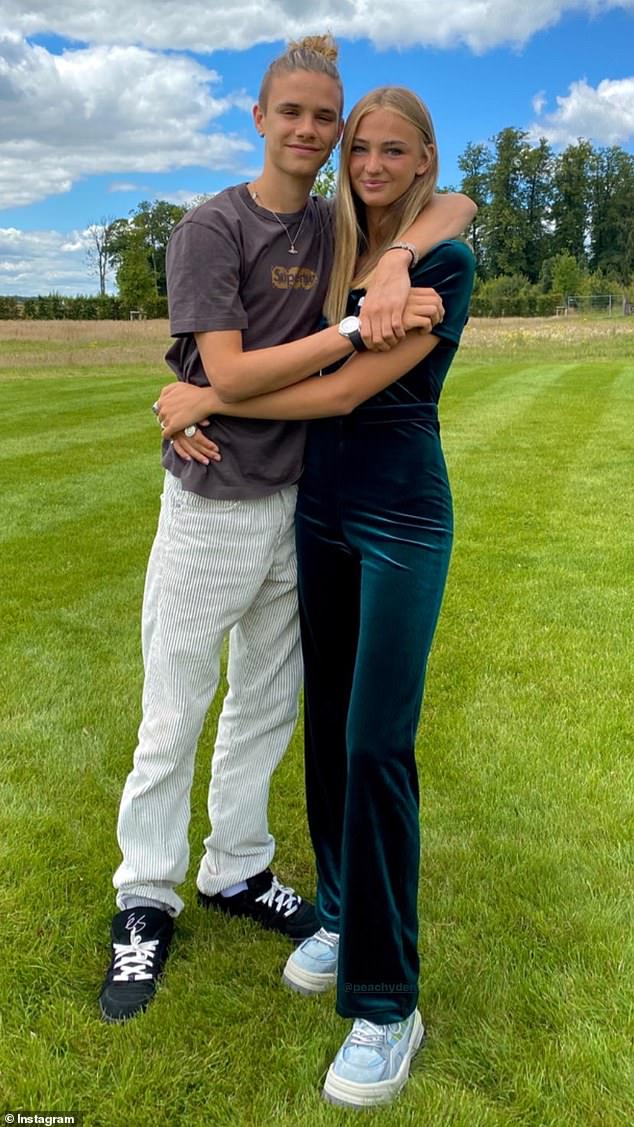 Missing: The Inter Miami II footballer regularly shares pictures of his long-term love on social media but his followers couldn’t help but notice they had vanished from sight on Monday