If you’ve been trying to invest ethically over the past few years, chances are you’ve been avoiding the defence sector, just as you will have shunned cigarettes, gambling and possibly even alcohol.

But what happens when a so-called ‘sin stock’ starts arming the freedom fighters? Should investors drastically change their views?

As Russia continues its onslaught against Ukraine, defence companies have soared in value. 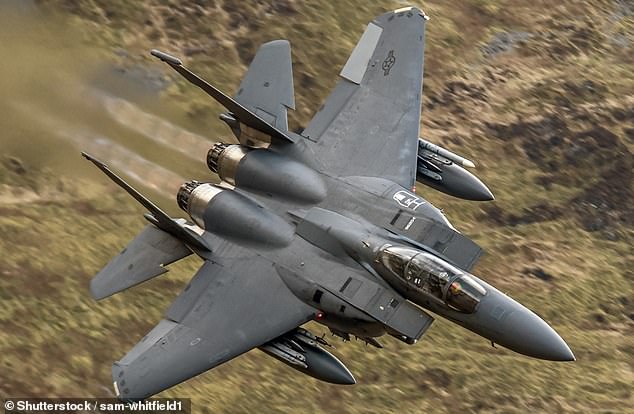 Tense: The world’s threat level is heightened and nations are increasing their defence budget

The world’s threat level is heightened, nations are increasing their defence budget, and the EU is rushing to arm Ukrainian soldiers. Suddenly we’re reminded of what the word ‘defence’ really means and questioning whether there is a place for defence shares in a larger number of our portfolios after all.

This could mean a rerating for a sector that has been out of favour for some time as investors poured money into green funds and defence companies were screened out of many ‘Environmental, Social, and Governance compliant portfolios’.

There are already signs that the tide is turning. Swiss Bank SEB has just lifted some of its restrictions on investing in defence companies.

It will still block any company that makes what it calls ‘controversial weapons’ such as cluster bombs, but that gives it far more leeway to invest in defence. Other investment companies are likely to follow suit. David Perry, at JP Morgan Chase delicately notes that defence is a ‘complex topic when it comes to ESG investing’.

‘More investors may accept that ‘defence’ is needed to preserve peace and democracy, driving a rerating,’ he notes.

The fact that defence stocks are soaring in value will further whet investor appetite for an unloved sector. Analysts Ross Law and George McWhirter at Berenberg point to ‘conflict-driven demand potential’ as a reason why defence stocks are now attractive.

‘Valuations across the sector remain compelling given the improving prospect of rising defence budgets,’ they said in their most recent note.

Midas mentioned BAE Systems in last week’s column, tipping it at £6.53. Since then it has risen to £6.92. There are other stocks that defence fans could consider as well. Here is one to look at.

As Nato countries, including Germany, increase their defence budgets, Chemring is well-placed to benefit from increased spend.

The company makes everything from sensors for electronic warfare to what are called Countermeasures – flares and decoys to protect platforms and ships from missile threat.

Chemring has been trying to move away from military roots, focusing on broader cybersecurity products for all, with analysts particularly excited by its Roke security division in the US.

The company’s AGM statement, out this week, provided reassuring reading, with management saying that results for the current year will be slightly ahead of the consensus of analyst expectations. Those calculations will have been prepared before the recent flare-up, so it’s likely that there will be more demand ahead.

Many analysts are positive on Chemring. Peel Hunt, which has a Buy on the stock, believes that the Roke cybersecurity arm will come to the fore as fear over hacking intensifies, while Law and McWhirter at Berenberg believe that the company will have some of the highest shortterm demand from elevated threats or conflict in the region, both because of the sectors in which it operates, including cybersecurity, and its exposure to Continental Europe.

Until this week, it had been languishing on just 14 times earnings, due to a number of issues including an unresolved Serious Fraud Office investigation into money laundering allegations, and a probe into a chemical explosion at Salisbury Plain which killed one person.

Provisions have been made for both of these, but there’s still the chance more will be needed.

Midas verdict: Hindsight is a wonderful thing. Chemring was very cheap until defence was flavour of the month. After this week’s bounce, the shares trade on a price/earnings ratio of 19, which makes them a less compelling prospect than they were at 14 times earnings. But at this week’s close of £3.29 they are still trading below Peel Hunt’s £3.60 and Berenberg’s £3.55 price targets.

That may be the price we have to pay for a company that seems to have reinvented itself for a war fought both on the ground and in cyberspace.

Given that Chemring is in the right place at just the right time, it is worth buying on any weakness in the price, such as Friday’s fall.