Migrants 'to be housed in military homes' while 2,500 Brit veterans stay homeless 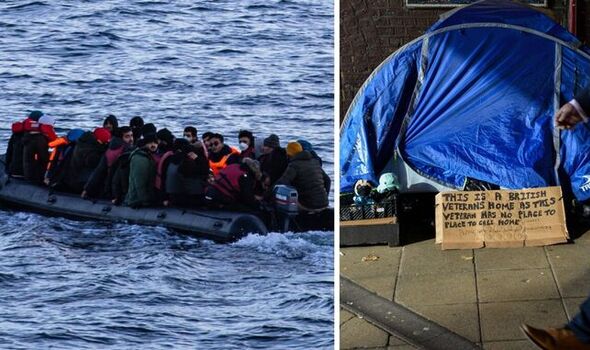 Hundreds of military homes have been set aside for migrants, while ­at least 2,500 British veterans do not have a roof over their heads. The Government has been forced to look at the accommodation amid ­growing resistance to the use of hotels, B&Bs and holiday camps to house the backlog of 143,000 asylum seekers.

One proposal allegedly being actively considered is to utilise homes kept vacant for forces’ families as they move between bases.

Last night, the Ministry of Defence confirmed that 550 homes were earmarked for people who moved to the UK after the withdrawal from Afghan­­istan forced them from their homeland.

They arrived under the Afghan Relocation and Assistance Policy scheme, and their right to stay in this country has already been approved.

However, senior Home Office sources revealed that a separate proposal could lead to a further 500 military homes being used to help the Government fight the wider logjam of asylum seekers awaiting decisions on their claims.

The families would live rent-free while their applications are processed, with subsidised energy bills, mobile phones and £40 a week spending money for all adults. The MoD insists no meetings have taken place about extending the use of military accommodation to other migrants. A spokesman said: “There are no plans to house asylum seekers in defence accommodation, nor have any discussions taken place between the Ministry of Defence and the Home Office on this issue.”

But the insider said: “The migrant situation is the Home Office’s number one issue and, while there are several plans on the table, many have been reviewed and sunk.

“Putting migrants into empty MoD homes is considered a winner, if we can get support from other departments. We know there is likely to be a backlash from the public but our options are increasingly limited.”

Last night, forces charities reacted with fury and claimed the migrant crisis had led to war veterans being “sidelined”.

They argue that those who have served for the UK Armed Forces should be first in line for housing.

The No Homeless Veterans campaign, which is backed by former Olympic athlete and ex-Army sergeant Dame Kelly Holmes, estimates there are currently more than 2,500 homeless veterans. And the Royal British Legion says as many as six per cent of rough sleepers are veterans, which would make the tally as high as 4,000.

Steven Bentham-Bates, of the Help 4 Homeless Veterans charity, said: “The Government is spending £7million a day on people who have just arrived in this country, while charities like ours are forced to scratch around to help veterans who have put themselves in harm’s way and now find themselves homeless.

“If I was a veteran sleeping rough, I’d be thinking why on earth did I bother going to fight for a country which turns its back on me?”

Sources have told the Sunday Express that the disputed new plans centre around 500 empty military properties owned by Annington Homes.

Annington owns 37,620 military properties in England and Wales, of which 7,230 are vacant, ostensibly to meet the demands of service families moving from base to base. The properties are managed by the MoD.

Last week, figures revealed that 1.1 million long-term immigrants arrived in the year to June 2022, up 435,000 on the previous year. An estimated 504,000 more people came to the UK than left in that time.

While these figures – the highest since records began in 1964 – include 138,000 refugees under the Ukrainian, Afghanistan and Hong Kong visa schemes, they do not include 40,000 who have arrived via clandestine routes, such as on small boats across the Channel. Refugee charities say that whichever housing option is chosen, new arrivals need to be treated humanely.

Refugee Council spokesman Mark Davies said: “The UK is only the ninth most popular asylum destination, in part because it is so difficult to get here and apply. But the fact is that 77 per cent of all asylum seekers who did apply last year had their claims upheld.

“This is a global issue, and the Government has ignored repeated warnings and has failed to ensure that mechanisms were in place to deal with it.

“We believe that, after a period of six months, those still waiting for their applications to be processed should be allowed to find work. This would add £330million to the UK’s economy.

“And those with relatives here should be allowed to stay with them, which would alleviate the accommodation shortage.”

The crisis has been made worse due to the backlash against using tourist hotels to house migrants.

Last week, Great Yarmouth Borough Council won a High Court battle to stop migrants being placed in the Norfolk town’s 59 hotels, after arguing they should be kept available for tourists visiting the resort.

And in a heated town hall meeting about the same issue in the seaside resort of Skegness – currently housing 216 migrants from Iran, Iraq, Afghanistan, Eritrea and Ethiopia in six hotels – Tory MP Matt Warman said: “The reality is that the Home Office doesn’t have alternative accommodation, and I’ve asked them to look at former military bases as a better way.”

As it strives to contain the crisis, however, the Government is stepping up action for veterans.

The Armed Forces Covenant, which was made law last week, offers priority housing for veterans who have been out of the Armed Forces for less than five years. But many overwhelmed councils are struggling to comply.

Help 4 Homeless Veterans says applications for its services have doubled over the past year.

While the Yorkshire-based charity, which helps veterans across England and Wales, said it is right that those on recognised migrant visa schemes are homed, it noted with irony that veterans who fought in Afghanistan and who now find themselves homeless are being sidelined for the very Afghans they had tried to help.

Mr Bentham-Bates said: “When I began working here years ago, we were averaging 58 veterans a year – around one application a week. In the last full 12 months we helped 99. And now, six months into our current year, we’ve already helped 70. These are people who have served their country. Many have been in harm’s way in Iraq or Afghanistan and had horrific experiences.”

Most applicants have been out of the Armed Forces for longer than five years and have suffered hardships such as the breakdown of a relationship or PTSD.

Unlike larger charities such as Stoll, which owns and operates properties in which it places veterans, Help 4 Homeless veterans rely on the private sector. But this has been made more difficult where schemes to house migrants by the Home Office – which can offer better terms to landlords – compete with charities for the same space.

“How is it that the Government can find this magic money tree for asylum seekers when it has been left to charities like us to deal with homeless veterans for all these years?”

Last night, a Government spokesman said: “No one, not least those who have served this country, should be homeless.

“We remain steadfastly committed to our Ending Rough Sleeping For Good strategy, which

commits that no one who has served in the Armed Forces should sleep rough, and that is why we are investing £2billion over the next three years into tackling rough sleeping