Mike Tindall opened up on attending the funeral of Queen Elizabeth II last Monday. The husband of Princess Anne’s daughter, Zara Tindall, sat down with former rugby player James Haskell and TV host Alex Payne for a special episode of The Good, The Bad & The Rugby, their successful podcast normally focused on sports analysis.

In light of the death of the Queen, the three podcasters decided to film a tribute for Her Majesty, during which they spoke about attending the state funeral, reflected on how important the Queen has been for the UK and reflected on the past few days.

Mike said it had been “so positive” to attend the historic state funeral in person.

After noting more than four billion people across the world watched the event on TV, Mr Payne asked the former England player if, while attending the funeral, he recognised it was an event the world had stopped to watch.

Mike, who appeared emotional through this special tribute for the late monarch, said: “I don’t think it dawned on you, it’s when you turned on the highlights and you saw everything.” 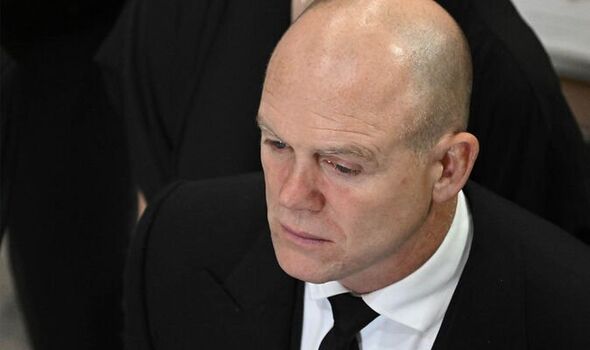 Mike and Zara Tindall got married in 2011 (Image: GETTY)

Referring to the thousands of tributes people left for the Queen during the 11 days of national mourning, he continued: “Even though being in London a couple days through the week prior, what happened in Green Park, what they did with the flowers, and being lucky enough to go to Windsor and seeing all the flowers being put up the Long Mile.

“And had friends who were in the Long Walk sending me messages, sending me photos, that’s sort of where you gauge the importance.”

Mike supported his wife Zara, one of the Queen’s eight grandchildren, throughout the period of national mourning.

On September 14, he stood by her during the procession which took Her Majesty’s coffin from Buckingham Palace to Westminster Hall.

During the Queen’s lying in state, Zara and Mike brought their two daughters, Lena, four, and Mia, eight, to the Hall to watch the touching 15-minute-long vigil held by Her Majesty’s children.

Zara also took part in a similar vigil herself on the following day, September 17, alongside her brother Peter Phillips and six cousins.

Mike and Zara brought along their elder daughter at the funeral.

Among the other great-grandchildren of the late sovereign in attendance were Prince George, nine, and Princess Charlotte, seven.

Mike and Zara Tindall attended both the Queen’s funeral service and the committal service (Image: GETTY)

Mr Phillips’ daughters, Isla, 10, and Savannah, 11, also joined the congregations both at Westminster Abbey and at St George’s Chapel.

There, the Royal Family, foreign royals and other attendees gathered for the committal service and watched the Queen’s coffin being lowered into the Royal Vault.

The monarch was buried in Windsor during a private ceremony attended by her close relatives later on the same day.

She rejoined her beloved mother, Queen Elizabeth, father, King George VI, sister, Princess Margaret, and husband, Prince Philip, in the small King George VI Memorial Chapel she had comissioned in the 1960s as a burial place for the late king.

Designed by George Pace, the chapel was finished in 1969 and sits within the walls of St George’s Chapel.

It presents the names and dates of birth and death of King George, the Queen Mother, the Queen and Philip alongside with a metal Garter Star, in tribute to the fact they were all members of the Order of the Garter.

From September 29, the Queen’s burial will be open to visitors of Windsor Castle who want to pay their respects to the late sovereign.

Members of the Royal Family sat in the first rows at Westminster Abbey during the Queen’s funeral (Image: GETTY)

The Queen died peacefully at Balmoral Castle on September 8.

Aged 96, she worked until the very end, as she met the new leader of the Tory Party on September 6 to ask her to form a new Government and issued a statement to Canada following a deadly stabbing incident.

Seven days after her funeral took place, the Royal Family has resumed their official duties and ended their private period of mourning.