What to do if your online banking goes down

With more UK high street branches turning to automated services or closing altogether, the reliance on online banking is becoming ever more prevalent for many, but not all. According to data from Which!, almost 5,000 branches have closed their doors to the public since 2015, with many more due to shut down in the near future. Major banks such as Halifax, Lloyds Bank, Santander, TSB and Virgin Money are due to close hundreds of branches between them this year according to Money Saving Expert guru, Martin Lewis.

The closure of branches has seen nearly 14 million Brits now turn to online banking as a result.

However, not all are happy with the move.

The elderly in particular have vented their fury.

Speaking to Express.co.uk, one retired man stated he was left “confused” by the move.

The retiree, a Mr Cameron said: “I went to apply for a credit card at my local Natwest branch.

“I waited for a long time in the queue to speak to a staff member, only to be told I had to apply via the app.

“I am not confident using these apps, and the branch told me to ask a family member to help me.

“My eldest son lives abroad, and my daughter lives in another city.

“I get confused with new technology, I felt isolated and abandoned by a bank I have been with for over 30 years.” 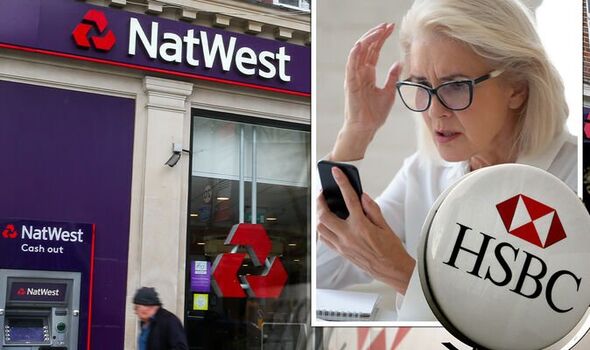 Over 5,000 branches have closed since 2021, with hundreds more set to follow (Image: Getty)

Another case saw a 10-year-old girl visit her local HSBC.

Her parents told Express.co.uk: “Our daughter had been saving up money from Christmas and birthdays, as well as pocket money.

“We are trying to teach her the value of money, and how to manage it responsibly.

“She was so excited being able to go to a bank and open her first account, hand over money and hopefully get some kind of welcome pack for kids.

“I remember getting a set of pig money banks from Natwest, so was hoping it would be similar today.

“We were told all accounts had to be opened and applied for online.

“We also went to HSBC across the road but were told the same thing.

“Needless to say, our daughter was left very disappointed.”

NatWest told one customer to “seek help from a family member” when banking online (Image: Getty)

The fury was shared by social media users who have also vented their anger at the requirement to do banking online.

Taking to Twitter was journalist Halla Mohieddeen who said: “Tried to go into two bank branches to set up a business account.

“Both have fobbed me off onto call centres and websites.

“Is this how banking is done in the UK now?”

She then added: “I miss having a bank manager”

Replying to Ms Mohieddeen, Catriona Stewart said: “Seems to be. I had an absolute malarkey with Barclays recently and eventually gave up.

“When I went into the branch they just looked up the website and when I phoned the call centre chap similarly just talked me through how to look on the website.”

Ken R said she was lucky to even find a branch, saying: “You found branches? Best not tell their HQs, they’ll shut them down.”

Speaking of how human contact is now almost non-existent in banks, Simon Torkington said: “We changed our mortgage over last week without ever talking to a human.”

On a wider scale, speaking of the apps, Rx said: “I hate opening my banking apps man I don’t need that negative energy in my life.”

Danajah said: “I hate when my banking apps tell me my Touch ID is not enabled and I have to sign in.

“Like I don’t remember none of my passwords, so now I have to wait and try again late.”

The password and security issue was also mentioned by Taskin who said: “I hate when banking apps update their apps, I don’t remember my log in info and now I don’t know if I can spend money or not.”

This is YOUR chance to tell us how you feel! Have you experienced similar problems with your bank? Do you find online banking and apps confusing and frustrating? Do you wish banks had more staff to deal with your daily banking in person? We want to follow on this story with your comments, so get in touch with us by CLICKING HERE and adding your views to our comments section – Every Voice Matters!

One elderly Twitter user also vented his frustration at the changing face of the app he was using.

Wandsworth Eye said: “Why Barclays have you changed the logo of your banking app?

“This is confusing to older and less able people.

“We are constantly told not to click on unfamiliar icons and odd links.

“Yet you, who should be at the forefront of security change it for momentary kudos from LGBTQ people,” commenting on how the famous Barclays eagle logo had now become rainbow coloured.

Have you been a victim of a banking scam? Do you feel safe using online apps? Do you feel let down by your bank? Let us know in the comments section below, just CLICK HERE to get in touch – Every Voice Matters!

An HSBC spokesperson said: “Our branches are there to support our customers, so it is disappointing that this may not have happened in these cases.

“We have made significant investments in our systems and processes, so more ‘traditional’ queries can be completed digitally by self-service in a branch or on a branch tablet with a branch colleague, including completing a current account or credit card application, which is typically faster and easier than it would be at a counter.

“We are very conscious that there will be some customers who are less confident or comfortable using self-service or digital options, and we would like to assure them that we will not be leaving any of our customers high and dry.

“We will always have branch staff on hand to help in the banking hall rather than behind a screen, to explain and also to educate customers on how to complete their transaction.”