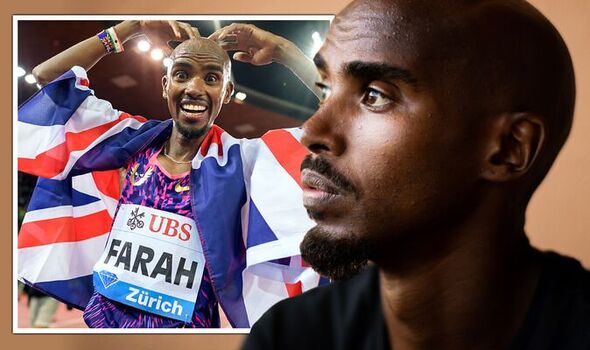 Olympic legend Sir Mo Farah revealed he was trafficked to the UK when he was just nine years old (Image: GETTY)

The sporting icon revealed that his real name is Hussein Abdi Kahin and fled his native Somaliland as a boy when his mother sent him and twin brother Hassan to live with an uncle in Djibouti.

Mo’s move to the neighbouring country came after his father was killed in the civil war, devastating his family and leaving his wife fearing for their children’s safety.

The long-distance champion was then brought to Britain under a false identity with the real Mo Farah remaining in Somalia and never making it to the UK.

The astonishing revelations are made in a BBC documentary, which throws up as many questions about his past as it answers.

Sir Mo tells viewers: “The truth is I’m not who you think I am. And now, whatever the cost, I need to tell my real story.”

The biggest question is whether, in going public with the truth about his identity, he has put his British citizenship in jeopardy.

Farah’s mother sent him and twin brother Hassan (L) to live with an uncle in Djibouti (Image: GETTY)

“Most people know me as Mo Farah but it’s not my name or it’s not the reality,” he explained. “Despite what I’ve said in the past, my parents never lived in the UK. When I was four, my Dad was killed in the civil war – as a family we were torn apart.

“I feel like I’ve always had that private thing where I could never be me and tell what’s really happened.”

After hiding the truth for 30 years, he says he can no longer do it. “I wanna feel normal and not like you’re holding on to something.”

Mo, now 39, was brought in using false Visa documents to work in “domestic servitude” for a family with younger children.

The woman who brought him pretended to be his mother, telling him not to speak while travelling through the airports in 1993. He realised he’d taken another boy’s place when the man meeting her wondered where on earth his son was.

“He was her husband and their family name was Farah. He was waiting for them and his oldest son Mohamed. That’s when I realised, I had taken Mohamed’s place.”

When they got back to the house, she ripped up the contact details he had for his only UK relative. “At that moment I knew I was in trouble,” Mo remembers.

The woman – who did not respond to requests to appear in the documentary – threatened him to keep him from telling anyone the truth.

“If I wanted food in my mouth my job was to look after those kids, shower them, cook for them, clean for them, and she said, ‘If you ever wanna see your family again, don’t say anything or they will take you away’. Often I would just lock myself in the bathroom and cry.”

Having been kept from school for two years, he was eventually allowed to attend Feltham Community College when he was 11. He struggled with speaking English and his form tutor Sarah Rennie remembers his “incredible behaviour difficulties”.

She explains: “We needed to speak to somebody, but Mo’s family never turned up. He was coming into school, he was unkempt, he was uncared for and we were more and more worried.”

Mo said he was “scared” and so coped in the only way he could – by getting outside and running.

His PE teacher, Alan Watkinson, immediately recognised his talent. “Every race we put him in, he pretty much always won and then by a long distance. So, that wasn’t difficult to spot,” he laughs.

Mo had finally found someone he could trust. “Mo told me he wasn’t the son of the person he was living with – that his name wasn’t Mohamed Farah, he was removed from his family, that he was given a new identity and brought over here to do jobs and chores. That was obviously quite a shocking revelation to hear,” Alan said.

Social services were involved and Mo got a lucky break – Kinsi, the mother of a Somalian schoolfriend, agreed to take him in and he lived with the family, happily, for seven years. It turns out Kinsi was the sister of the man who’d met him at the airport – the real Mohamed Farah’s father.

Alan remembers this period as heralding a “remarkable transformation”. “We’d had good runners before but the progress from there was just stratospheric.”

At 14, when he was selected to compete for English schools in Latvia, it became clear he didn’t have the right documentation to travel abroad. Alan set about getting him British Citizenship and shows Mo the box of documents he’s kept since then. “We just bombarded them,” he explains.

Speaking 22 years later, Mo doesn’t want to get his former PE teacher into trouble, but Alan is bullish. “When you went through the process of social services, you stayed as Mohamed Farah. To my mind, at that point, the state have recognised you as Mohamed Farah. I don’t think either I or the school did anything wrong.”

But deciding to take legal advice, Mo is shocked to learn that his application for British nationality was “obtained by fraud or misrepresentation” in the eyes of the law – which means his British nationality could be taken away, although that risk is mitigated by the fact he was trafficked to the UK, as a child, and then told social services what had happened.

Mo’s wife Tania, who first met him in school, says she only learned the full truth as they prepared to marry in 2010. “We were engaged by 2009 and it was during that period of time that I felt like there was lots of missing pieces to his story,” she explained.

Like millions of others, Tania had believed the version of Mo’s life that he told in his autobiography – Twin Ambitions – which was that he was born in Mogadishu, Somalia and came to the UK as a youngster with his mum and two of his brothers to live with his father.

Tania says she was “gobsmacked” to learn the truth. She says that the big question – still unanswered by the end of the documentary – is just WHY he was switched for the real Mo. “That to me is the 64,000 dollar question.”

In his quest for more answers, Mo travels to Somaliland to visit his real mother, Aisha, who he regained contact with as a teen after she sent him her phone number.

Aisha had spent years not knowing that Mo had been taken to live in the UK after his father, Abdi, was killed by shrapnel from a bazooka while tending his cattle. “When I heard him, I felt like throwing the phone on the floor and being transported to him from all the joy I felt,” she says in the film.

Aisha said that she sent him and Hassan to Djibouti for their own safety. “We were living in a place with nothing, no cattle, and destroyed land. We all thought we were dying. Boom, boom, boom was all we heard. I sent you off to your uncle so you could have something.” She claims to have no idea why he ended up in the UK.

“No one told me. I lost contact with you. We didn’t have phones, roads or anything. There was nothing here. The land was devastated.”

She says she has no idea who the real Mo Farah is and advises him to tell the world the truth. “You were given a name that was not yours, sent away to England, a country you knew nothing about. It’s important that you tell your story. Lying is a sin.”

Mo is happy. “When I told them there would be a risk me doing this, they said ‘It’s the truth. It is what it is, you are who you are, there’s no denying that’.”

The shack he lived in with his uncle in Djibouti is now owned by someone else, but visiting it brings back the memory of being taken away. “The hardest thing is admitting to myself that someone from my own family may have been involved in trafficking me,” he admits.

He learns from trafficking expert Kate Garbers that there are between 10,000 and 100,000 trafficking victims in the UK. She tells him he’s “incredibly brave” for sharing his story. “For you to come forward will hopefully challenge people’s perceptions of what slavery and trafficking is, and who it might happen to.”

Looking back on his life of sporting triumphs, Mo can’t help but be happy with the way his life worked out. “It just shows how lucky I was. So many moments in my life where it could have gone this way or that way. But what really saved me, what made me different, was that I could run.”

PE teacher Alan says that, watching Mo at the 2012 Olympics where he won his first “double” gold, he was overcome with emotion. “I was in bits, I was crying. I knew the story and it was just a crazy, ridiculous story that you couldn’t make up. The enormity of it was just difficult to comprehend.”

After those victories, which he repeated in Rio in 2016, Mo appeared on Jonathan Ross and told of his excitement to be met off the plane by his dad – the story he would later stick to in his autobiography.

“It’s not because you wanna lie, but because you’re protecting yourself,” he explains. “You only realise later down the line it’s OK to let things out and say how it happened.”

When producers track down Kinsi, he hopes she might provide more answers as the sister-in-law of the woman who smuggled him in.

But Kinsi says she was told Mo had been brought to the UK because he was an orphan. She told social services that she was his aunt because she could see he was unhappy and not being treated well. “I’m not your Aunt but you’ve got my brother’s name,” she explained to Mo. “And you’re a child, you need someone to protect you.”

She then says she can phone her nephew, the real Mo Farah, who has never been to the UK. Speaking to him, Mo discovers that his alter ego supports Arsenal and has no interest in running. “I just wanna say thank you so much – I used your name. I came here as a child and it’s been hard, difficult.”

Thrilled Mo declares: “I feel like something’s been lifted off of my shoulders. But I don’t know how everyone’s gonna see it.”

He plans to stick with the name Mo Farah and, since finishing the film, has sought legal advice on how to engage with the Home Office.

Producers were unable to contact Kinsi’s brother who met him off the plane or any of the family members in Djibouti.