Kourtney Kardashian’s constant kissing of Travis Barker has been a frequent topic of conversation on The Kardashians, with Kourtney’s own kids now joining the conversation.

The 43-year-old Kourtney and 46-year-old Barker are, more often than not, seen kissing when they’re on camera, which lead to her two youngest children – Penelope, 9, and Reign, 7, though her oldest Mason, 12, was not seen in the episode.

Kourtney was at Travis’ house, playing some ping-pong with Penelope when Travis gets home and they start kissing, much to the chagrin of Penelope. 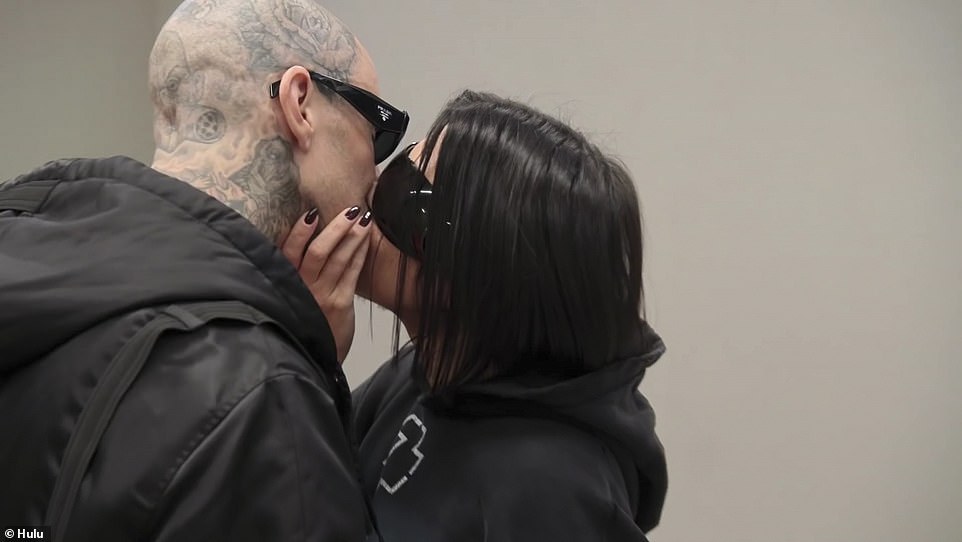 Kissing: Kourtney was at Travis’ house, playing some ping-pong with Penelope when Travis gets home and they start kissing, much to the chagrin of Penelope

‘Mom, no kissing,’ Reign protests, as Kourtney says, ‘Just one,’ but Penelope insists, ‘No.’

Kourtney asks about the ‘certificates you gave us,’ as Penelope goes to give Kourtney a hug

Both Kourtney’s kids and Travis’ kids – stepdaughter Atiana, 23, son Landon, 18, and daughter Alabama, 16 – sit down for dinner, as Kourtney talks about vegan corn dogs she had.

Kourtney adds in confession that she ‘loves the idea of a blended family,’ adding, ‘the more kids the merrier.’

‘It’s like more people to love. I am really close with Travis’ kids and I love them and it’s a beautiful thing,’ she said. 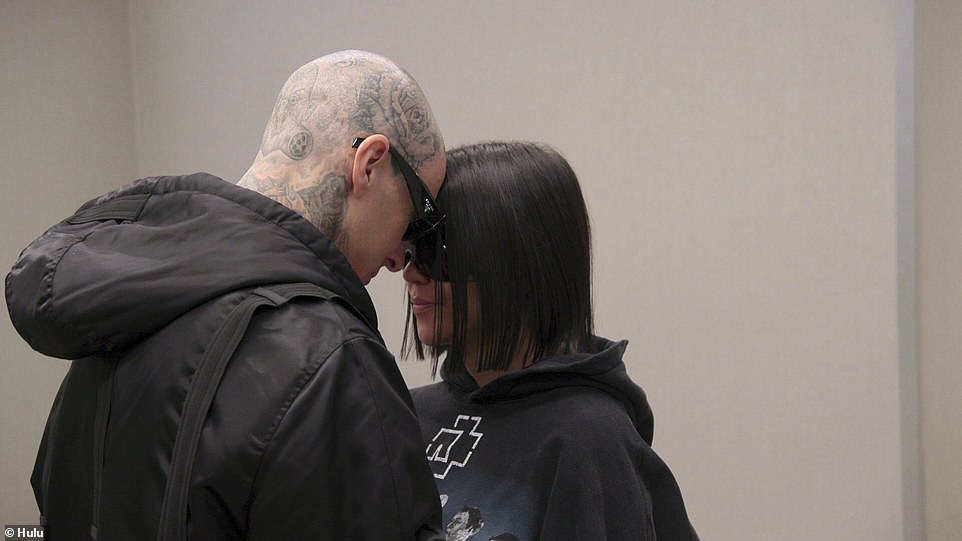 Travis tells his kids that Kourtney took her to a family tradition that isn’t vegan, and everyone was defending him for being vegan, ‘like I had a medical disorder or a handicap.’

Reign talks about the ‘monsters’ at the table, and Travis asks if, ‘all girls are monsters,’ and Reign says yes.

Kourtney adds in confession that, ‘Travis is a really amazing father, it’s one of the reasons I fell in love with him. He is really, really patient.’

She added that since they have all known each before, ‘it does make it easier to blend our families. It’s all I ever want.’

Kourtney and Travis’ kissing is brought up again at dinner, after they’re seen smooching again, but this time Reign chimes in with, ‘Can you guys not kiss in French again?’ as Travis and Kourtney laugh.

Landon thanks everyone for the ‘great dinner’ before taking off as Alabama leaves with Atiana as Travis tells them to wear their seatbelts.

‘We’re gonna get our one egg, perfectly shaped magical egg,’ Kourtney says as she admits she’s nervous to get put to sleep. 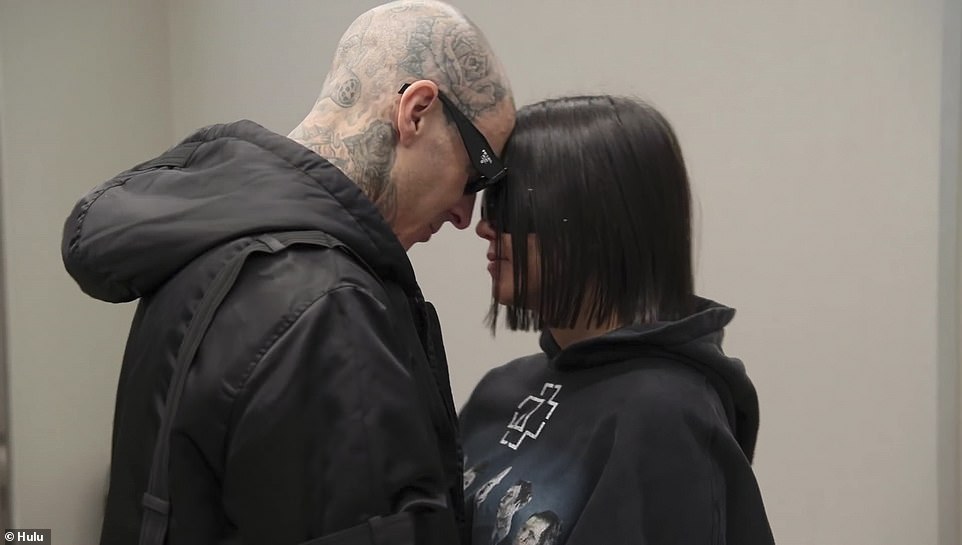 ‘You’re the best sleeper in the world, baby. You don’t have to worry about anything,’ Travis reassures her, while Kourtney says Dr. Wood makes her feel really comfortable.

Travis says, ‘My baby is the strongest, you’re super strong,’ before they make out again.

Earlier in the episode, Kourtney Kardashian and Travis Barker went to Venice to continue their fertility journey with Dr. Thais Aliabadi (OB-GYN).

‘So our egg retrieval with Dr. Wood didn’t go the way we would’ve hoped,’ Kourtney said in confession.

‘He was able to retrieve the egg, but it didn’t make it to an embryo stage,’ Kourtney added as Travis takes a snap of Kourtney doing an Ultrasound.

She adds in confession they are checking to see how many follicles they have and measures them and sends them to Dr. Wood.

The doctor asks if he has a photo of every time they’ve done this, and Travis says, ‘Every time’ as the doc can’t help but laugh.

She points out a follicle that is looking good, adding, ‘it’s the first time we’ve had it, which was 12 two days ago and 14 right now, ‘which is about the right size for retrieval.’

Kourtney texts the photo to Dr. Wood as she says this is the best they’ve had thus far, as Kourntey adds in confession that they try to ‘stay in the moment.’

‘It’s nice to hear some good news and hear some positivity, but we wait to hear the final thoughts from Dr. Wood,’ Kourtney adds in confession.

Their constant make-out sessions may be in jeopardy, of sorts, with the preview teasing their ‘new thing’ known as a, ‘panchakarma cleanse.’

‘No caffeine, no alcohol, no sex,’ Kourtney reveals. 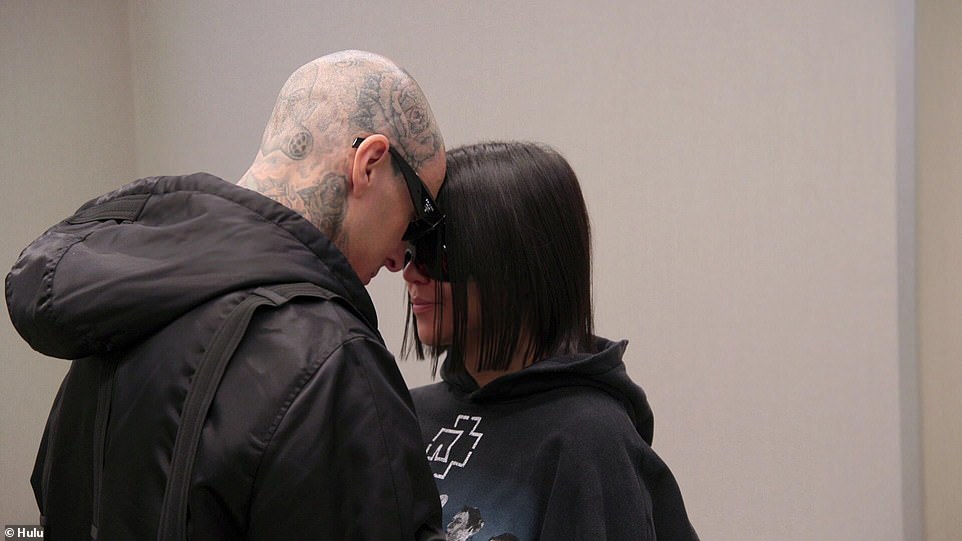