And Alberto Costa said Mr Johnson had also undermined his credibility by giving too many jobs to his “pals”, regardless of their ability, during the course of his Premiership. The PM confirmed his decision last week after the revelation that he had been aware of an investigation into the behaviour of Chris Pincher MP, who quit as deputy chief whip amid accusations that he groped two men in a private members’ bar last month.

The news prompted a string of ministerial resignations and Mr Johnson, despite initially refusing to go, quit his job on Thursday, firing the starting pistol on a Tory leadership contest. So far, 11 people including former Chancellor Rishi Sunak, former Health Secretary Sajid Javid and Foreign Secretary Liz Truss have thrown their hats in the ring.

Mr Johnson is widely believed to be furious at being forced out, especially towards Mr Sunak, whose own resignation, along with that of Mr Javid, triggered the exodus.

However, Mr Costa, who sites on both the Committee on Standards and Committee on Privileges in Parliament, said accusations of “treachery” emanating from the Johnson camp were wide of the mark.

Mr Costa, the Tory MP for South Leicestershire, explained: “Margaret Thatcher used that word treachery, I think she said famously, ‘it’s treachery with a smile on its face’. But the real difference then was over policy. 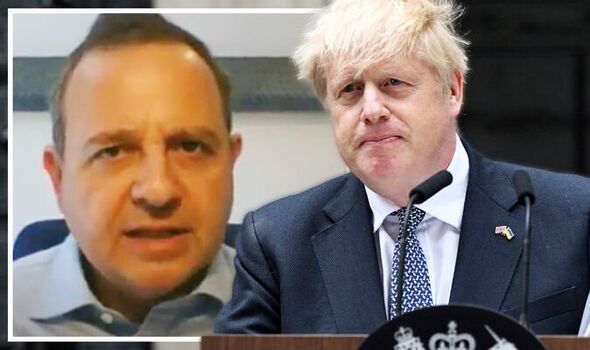 Boris Johnson only has himself to blame, said Alberto Costa MP (Image: GETTY)

Rishi Sunak has confirmed his intention to run (Image: GETTY)

“Now we don’t have a policy dispute. Rishi resigned, he explained why he resigned on the issue of integrity and I repeat, Boris Johnson has all the skill sets, the experience, the knowledge, the ability to have been a great Prime Minister.

“It’s not my fault that he’s had to resign, it’s not Rishi’s fault, it’s not anyone’s fault but the man that has held or holds that office.

“He has to look himself in the mirror and ask himself why he felt that he was unable to maintain the trust of the parliamentary party and the country at large.”

Referring to the ongoing probe into Mr Johnson following the publication of Sue Gray’s report into various social events centred on Number 10, Mr Costa added: “I’ve always given him the benefit of the doubt.

“I’ve remained scrupulously impartial in my role on the Committee on Privileges, which is looking into, as instructed by the House of Commons, that whole issue.

“So I can’t comment about the specific issues that Boris Johnson has been accused of, but I think generally, you’ve used the word treachery, I don’t see that in terms of how colleagues have resigned.

“I see that colleagues have said, ‘enough’s enough, we need to take the country forward, we need to re-establish good governance.

“And my opinion on how you do that is by pledging to bring the best people around that Cabinet table.”

Margaret Thatcher was forced out in 1990 (Image: GETTY)

Before he commits his support, Mr Costa is calling on all candidates to provide examples of ways in which they have “upheld standards in the decision-making process” in jobs which they have already had, as well as to reaffirm their commitment to “a properly functioning British cabinet”.

He said: “Tony Blair was the first of the recent Prime Ministers to move towards a Presidential-style system, even though Margaret Thatcher had been accused of that.

“You may remember the phrase used in the late 90s, that he moved towards a sofa-style government, meaning that he would take decisions with a small coterie of people in his office, rather than having proper debate in cabinet.

“But Boris has really moved that too far because unlike Tony Blair had in his Cabinet really big heavyweights – Donald Dewar, George Robertson, Robin Cook, Gordon Brown to name but a few.

“Boris seems to have appointed into Cabinet quite a few of his pals, people have been good with the spreadsheets, but his own campaign leadership team.

“The problem with that is if you don’t get the very best people in Cabinet, not only do you not get the obvious issue of not having the best person run a department, but much more importantly when it comes to standards and good governance, you don’t get the people that are prepared to stand up and say no to a Prime Minister whenever that’s necessary.”

By contrast, Mr Thatcher had “revelled” in having people of strength alongside her to argue with, Mr Costa stressed.

He said: “It was through argument, through discussion, through debate, that she defined her own thinking on policy.

“And that to me, is why I think that the leadership candidates in pledging restoration of good governance have to pledge to re-establish a proper functioning cabinet with the best people around that table and not just their pals.”