Mr Musk — who is already the CEO of SpaceX and Tesla — secured his deal to buy Twitter for $44billion (£35billion) on Monday.

On Twitter, meanwhile, European Commissioner for Internal Market Thierry Breton posted that “be it cars or social media, any company operating in Europe needs to comply with our rules — regardless of their shareholding.

“Mr Musk knows this well. He is familiar with European rules on automotive, and will quickly adapt to the Digital Services Act.”

Mr Breton told the Financial Times that if Twitter “does not comply with our law, there are sanctions — six percent of the revenue and, if they continue, banned from operating in Europe.”

Mr Musk has previously described himself as a “free speech absolutist” and pledged to preserve Twitter’s social function as a “digital town square”.

However, posting on Twitter last night, the billionaire seemed to suggest that his stance had been misunderstood by his critics — and that such was not as radical as some feared.

He said: “The extreme antibody reaction from those who fear free speech says it all.

“By ‘free speech’, I simply mean that which matches the law. I am against censorship that goes far beyond the law.

“If people want less free speech, they will ask government to pass laws to that effect.

“Therefore, going beyond the law is contrary to the will of the people.” 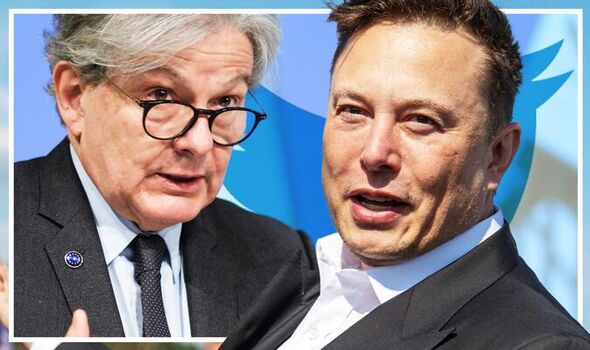 Mr Musk said Twitter will abide by all laws after the EU threatened to ban it should it break rules (Image: Getty Images)

Mr Musk’s stated designs were welcomed by UK Parliamentary Under-Secretary of State for Small Business, Consumers and Labour Markets Paul Scully, who described the aim to boost free speech on the platform as “noble”.

He added that the UK would not be “arresting Elon Musk” in the event that Twitter failed to take down posts from users based outside of Britain that violated the Government’s proposed new Online Safety Bill.

These rules are being drawn up with the goal of combatting a variety of online harms — from child abuse to fraud — and will allegedly require tech companies like Twitter to take responsibility for removing content that is “legal but harmful”, like racist or bullying posts.

To this end, the bill, which was brought before parliament last month, proposes to grant new powers to media regulator Ofcom to impose both fines and jail sentences to firms that fail to meet these new responsibilities.

Indeed, a spokesperson for Prime Minister Boris Johnson said: “Regardless of ownership, all social media platforms must be responsible.

“That includes protecting their users from harm on their sites.”

This sentiment was supported by the Labour Party, who said that if Twitter should prioritise posts on its platform that promote “fake news and abuse”, it would need to be asked to change its operating style.

Shadow minister for Digital, Culture, Media and Sport Lucy Powell added: “Musk should be held accountable for his business model.”

Mr Musk’s takeover of the social media platform — which is expected to take around six months to complete — has also caused a stir back in his home country of the US.

Echoing the concerns of Mr Johnson and his EU counterparts, a spokesperson for the White House said that US President Joe Biden held “concerns about the power of social media platforms, including Twitter and others, to spread misinformation.”

Commentators believe that the Democrat party is concerned that changes on Twitter might lead to political upheaval in the run-up to the US midterm elections later this year.

On the Republican side, meanwhile, the purchase has been welcomed by politicians who allege that right-wing Twitter accounts have faced bias and bans on the social network.

Arguably the most notable banned party is former president Donald Trump, who was ejected from his once-beloved social media platform back in January last year following concerns that his tweets were inciting violence and had contributed to the 2021 US Capitol attack.

However, Mr Trump himself has said that he does not want to return to Twitter should that be possible — with the former president having this year launched his own rival platform, “Truth Social”.