The Scottish journalist and broadcaster said the unprovoked invasion of Europe’s second largest country has upended politics in the UK and abroad in ways inconceivable a few weeks ago. This includes Prime Minister Boris Johnson remaining in office after it was assumed partygate, local election results in May and the cost-of-living crisis would see him ousted by Tory MPs.

Mr Neil said: “All that seems like ancient history now. Absent some horrendous revelation, Mr Johnson is safe as Prime Minister for the foreseeable future.”

“Diehard” Remainers also came under fire from Mr Neil who wrote that they could not be more wrong in claiming that Britain would “fade into irrelevance” post Brexit.

Writing for the Daily Mail, he said: “The Ukrainian crisis has shown we still have substantial power and influence on the international stage. We remain a player alongside the US and the EU…

“In a number of crucial areas, long-standing British positions — on the continued significance of Nato to Europe’s security, the need for more defence spending, and the importance of America remaining fully engaged with our continent — have become the new European consensus.” 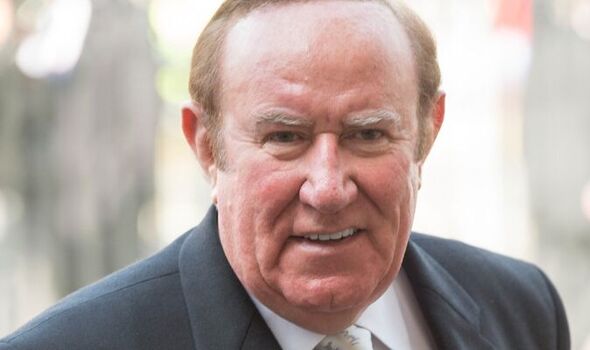 Andrew Neil has outlined major changes ushered in by the war in Ukraine (Image: Getty)

The former Sunday Times editor added that Germany’s “cosying up to the Kremlin” and seeing “little risk” in becoming overly dependent on Russian energy, besides refusing to spend “anything like enough” on defence, have also been junked.

Berlin has committed to spending £83 billion (€100bn) more on defence by 2024. The German government is also sending lethal weapons to Ukraine and has cancelled certification of the Nord Stream 2 gas pipeline between Russia and Germany.

On Net Zero, Mr Neil said the Government’s plan is now “effectively dead in the water” at least for the rest of the decade.

He wrote: “It was a cardinal error to sacrifice secure energy supplies — which should be the national policy priority — in the rush to decarbonise the economy. The result was to make democracies ever more vulnerable to autocracies such as Russia.”

Protestors outside a Russian-owned investment bank in Hungary to demonstrate against Putin (Image: Getty)

The former GB News chairman continued: “Now Britain stands tall, America is a reliable ally once more, the EU has found new purpose, Nato is more united than ever, Germany has rediscovered its backbone, and defunding the military is no longer Europe’s default defence policy.

“That’s quite a list of achievements for Putin, even if none was intended. Nor will things swing easily back to where they were.”

On Nato, Finnish president Sauli Niinisto maintained this week that Finland has a right to seek membership but damped down talk of doing so in the midst of the Ukraine conflict.

How the forces compare (Image: Express)

The Kremlin does not want Finland or Sweden to join the military alliance. A week ago Moscow warned them of “serious military-political consequences” if they did.

US President Joe Biden, in a call on Friday with Polish President Andrzej Duda, underscored Washington’s commitment to the security of all Nato allies.

A Ukrainian stands ready on a tank on a road near Sytnyaky, Ukraine (Image: Getty)

Antony Blinken, US Secretary of State, has also said that the EU and Nato are fully aligned.

In his MailOnline op-ed, Mr Neil described as a tragedy that it took the destruction of Ukraine to bring the West to its senses, adding: “Its people have a long, dark night ahead of them.”

Saturday’s article comes as Russia said its forces stopped firing near two Ukrainian cities on Saturday to allow safe passage to civilians fleeing the fighting. It was continuing its wider offensive in Ukraine, however, with Kyiv coming under renewed assault.

Russia’s RIA news agency reported the country’s defence ministry said its units had opened humanitarian corridors near the cities of Mariupol and Volnovakha which were encircled by its troops.

In Mariupol, citizens would be allowed to leave during a five-hour window, RIA quoted the city’s officials as saying.

The Ukrainian government said the plan was to evacuate about 200,000 people from Mariupol and 15,000 from Volnovakha with the Red Cross as guarantor of the ceasefire.

Migrants 'to be housed in military homes' while 2,500 Brit veterans stay homeless