Nvidia's £30bn takeover of Arm on the brink of collapse

Nvidia’s £30bn takeover of Arm on the brink of collapse: So will British chip designer now return to London stock market?


Nvidia is set to ditch its £30billion swoop on British chip designer Arm after a fierce backlash from regulators worldwide.

US semiconductor giant Nvidia is understood to have conceded that the deal is unlikely to complete.

Arm owner Softbank is now stepping up preparations to list the Cambridge company on the public markets, according to Bloomberg. 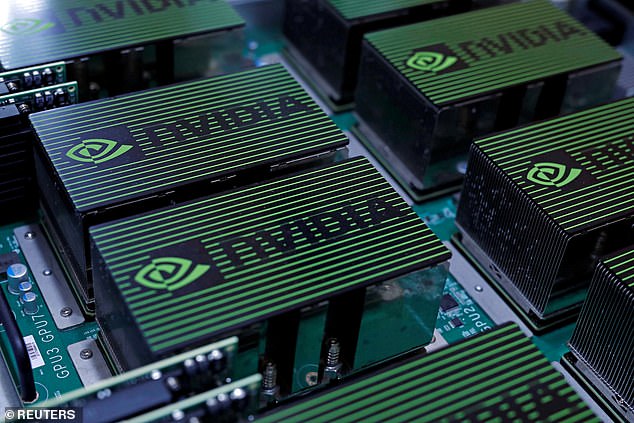 Thwarted: US semiconductor giant Nvidia is understood to have conceded that its £30bn swoop on British chip designer Arm is unlikely to complete

That could pave the way for the pioneering firm to return to the London Stock Exchange, where its shares were listed before its £24billion takeover by Softbank in 2016.

But the UK faces a fight to persuade Softbank to chose the City over New York. Analysts said Britain was ‘Arm’s natural home’ and Rishi Sunak recently vowed to make the City ‘an incredibly attractive place’ for companies to list ‘whether it is Arm or anyone else’.

Arm chief executive Simon Segars could be in line to get a payday ‘well in excess’ of £74million if the Nvidia deal goes through, an expert told the Mail. He would still receive a bumper, though smaller, payout if the group floated.

Nvidia agreed to buy Arm in September 2020. It would be the biggest-ever semiconductor industry takeover if it is successful but Nvidia faces losing a £950million downpayment for Arm if the deal falls through.

The swoop has triggered uproar from Arm’s customers and is under scrutiny in China, the US and the EU, adding months of delays to a process that was due to complete in March 2022. 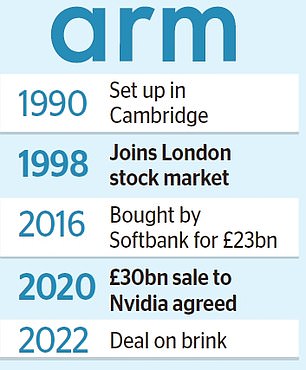 She believes it is crucial for the UK’s national security to maintain reliable access to Arm technology and that there are fears the Nvidia takeover could remove this.

Arm’s customers include Google, Samsung, Apple and Apple. Softbank licenses Arm’s designs to more than 500 companies who use them to make their own chips, which are used in 95 per cent of the world’s smartphones and other devices – from cars to fridges – that are connected to the internet.

In the UK the takeover is being investigated under the Enterprise Act of 2002. That was replaced this month by the National Security and Investment Act, giving the Government greater power to intervene in the sale of sensitive firms.

Even if the deal was waved through under the Enterprise Act, the new law could be invoked retrospectively to scrutinise the tie-up again.

Nvidia’s approach came at a critical time as a global shortage of microchips is sending shock waves throughout the manufacturing sector and slowing down production lines.

Arm co-founder Hermann Hauser, who spun off the company from Acorn Computers in 1990, recently said he believed Arm would be better off as an independent company listed in London than part of Nvidia.

Russ Shaw, founder of Tech London Advocates, said: ‘If they go down the listing route, the UK is Arm’s natural home.

‘It was born here, developed here, for the nation. This is our largest tech business in an area that so many countries at looking at on a strategic level.’

He added: ‘Scrutinising the deal will put off some future overseas investors in UK tech but it also says, “Hey, we’re really serious about our industry”. Arm’s expertise demonstrates that the UK no longer competes with Paris and Berlin. It is right up there with Silicon Valley and Shanghai.’

Nvidia and Arm are still pleading their case to regulators.

Nvidia said: ‘This transaction provides an opportunity to accelerate Arm and boost competition and innovation.’ Softbank said: ‘We remain hopeful the transaction will be approved.’

How to make a home bar: Tips from interiors experts