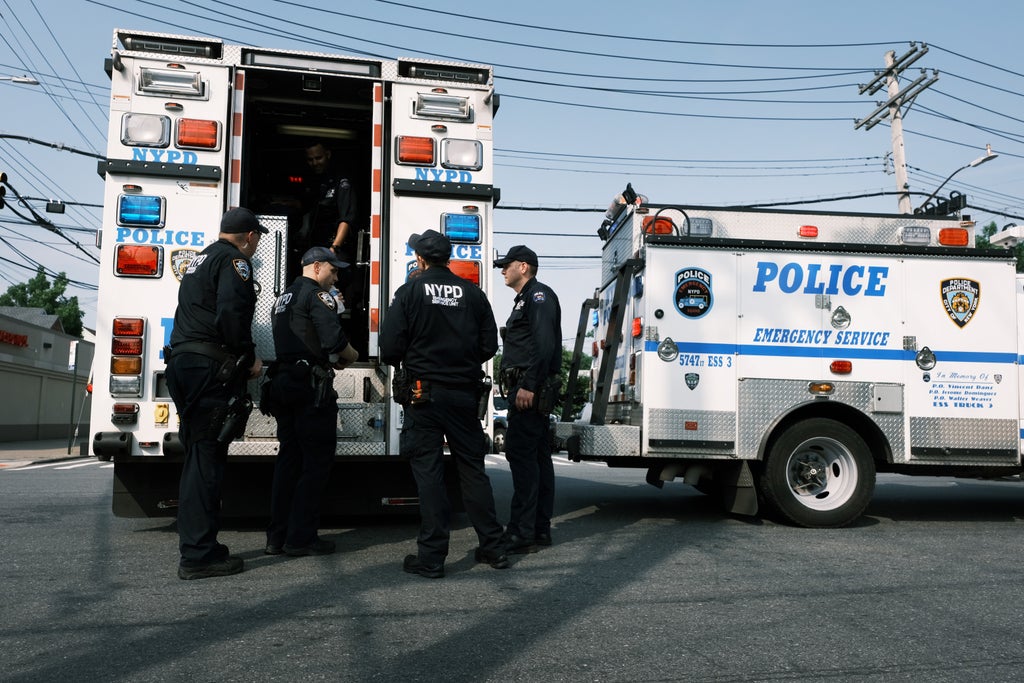 Coronavirus cases among the unvaccinated have skyrocketed in past weeks, and a recent report that only 43 per cent of NYPD officers and staff are vaccinated has raised concerns that officers may spread the virus to the people they interact with on a daily basis.

NBC New York reported on Wednesday that the vaccination rate of police officers and professional support staff is approximately 43 per cent. Because support staff are included in that estimate it is entirely possible that the number of vaccinated NYPD officers is actually lower than the reported number.

Critics on social media have called for all front-line city workers to be required to take the vaccine, as a police officer could potentially execute an arrest or even a traffic stop and pass the coronavirus to someone else.

“The overall NYPD vaccination rate between police officers and professional support staff is about 43%,” Democratic strategist Kaivan Shroff wrote. “That means cops could pull you over for a traffic ticket and give you a deadly virus. It’s unacceptable. Require vaccination.”

The NYPD issued a statement saying it encouraged its employees to take the vaccine.

“Since vaccines became available we have encouraged our employees, especially those who have contact with the public, to get vaccinated,” the NYPD said in a statement.

The department said it has made vaccinations available at multiple times and locations to give staff the chance to get the shot.

So far, more than 11,000 members have contracted Covid-19 since the virus began circulating in the US. It is not currently known how many officers received vaccines at outside locations, which would not be counted in the 43 per cent number.

“Upwards of 11,000 members of the NYPD have been infected with COVID-19 and statistically have a far lower likelihood of re-contracting the disease. That said, our newest internal messaging focuses on addressing rumors, misinformation and concerns with vaccination,” the NYPD said in the statement.

Those internal messages include two videos the department produced aimed at encouraging staff to get vaccinated.

The department suggested it has not made vaccination compulsory because it fears lawsuits that could result from such a mandate.

“While we have stopped short of compelling uniformed officers to be vaccinated by rule – which would likely face lengthy legal challenges – we have focused our efforts on strong education and encouragement,” the department said in a statement.

Almost 72,000 US children tested positive for COVID-19 last week making up 19% of cases