Oh Jared, you're a bit batty for me: PETER HOSKIN reviews Morbius

Verdict: From bats to batty

Oh look, it’s another Marvel movie. Except this one is different — apparently.

Thanks to that litigious supervillain known as Rights Issues, Morbius isn’t part of Disney’s Marvel universe, with its Iron Men and Black Widows whom we know so well.

Morbius is un-Avengers-like in other ways, too. Its hero, the raven-haired scientist Dr Michael Morbius, is actually an anti-hero.

He’s a vampire played by something even worse: Jared Leto. 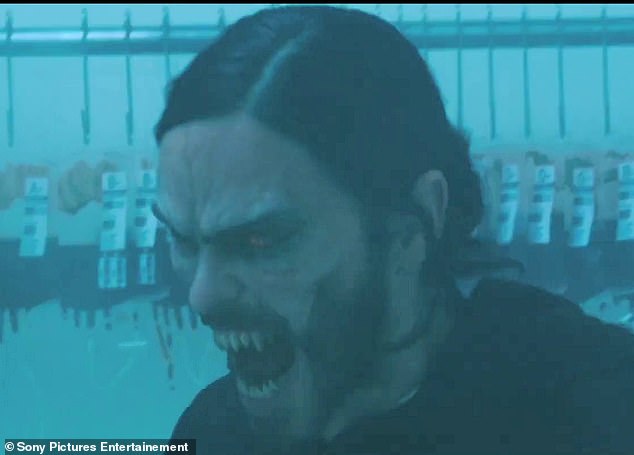 Blood thirsty: Morbius (played by Jared Leto) roars at the sight of the bags of blood

The effects of the Watergate scandal were still playing out when Alan J. Pakula made this masterful political thriller, in which Robert Redford and Dustin Hoffman are outshone only by Jason Robards, who won an Oscar as Washington Post editor Ben Bradlee.

The film starts off by showing the very human doctor, supporting himself on two crutches, being helicoptered into the jungle to investigate a cave full of vampire bats.

We then learn that he’s being bankrolled by his childhood buddy, Milo (Matt Smith), to find a cure for their shared, unspecified condition — by whatever means necessary.

These early scenes made me sit up in surprise.

I’d gone into Morbius expecting a throwaway comicbook movie, but the director Daniel Espinosa and writers Matt Sazama and Burk Sharpless seem to have higher aspirations.

Ooh, I thought, as the camera dripped down a waterfall in Costa Rica: this film has some visual imagination.

Aah, I wondered, as Morbius returns to his New York lab: are we about to see the first superhero of the pandemic age?

It helps, as well, that the relationship between Morbius and Milo is so oddly Romantic, with a capital R, in the sense of opium-addled, 19th-century poets trying to wring meaning out of the cosmos.

Smith is great as an emaciated patient who clings on to the life of a bon vivant.

Leto, who has perhaps the worst effort-to-achievement ratio in Hollywood, is more laidback here and considerably more watchable for it.

But then their relationship goes downhill — and so does the movie.

Morbius’s experiments turn him into a vampire with boundaries: he’ll only sup artificial blood.

Milo follows, but without the scruples: he knocks back the claret like it’s, well, claret. 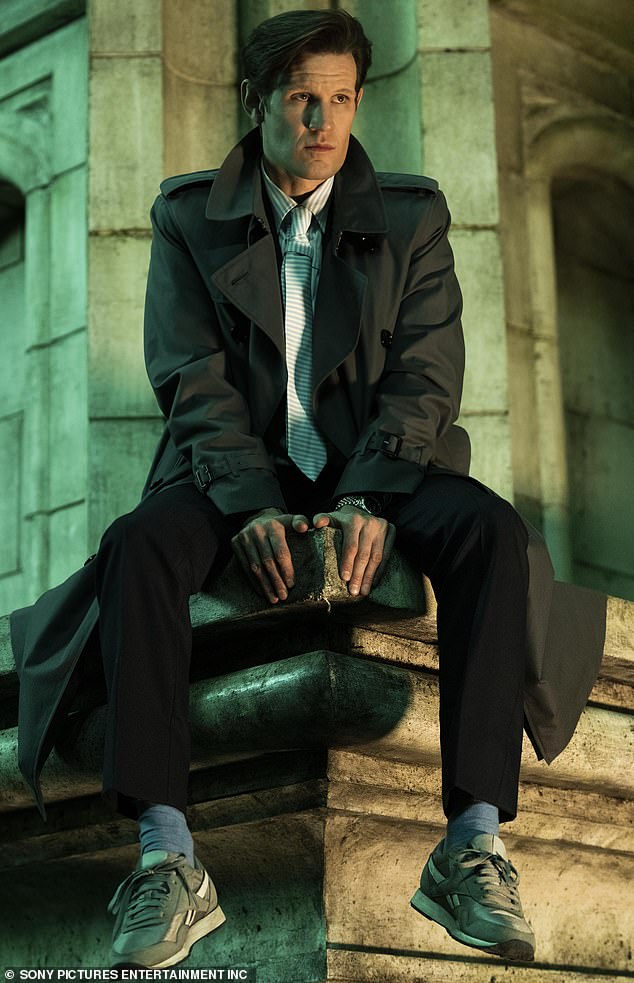 Matt Smith as Milo in Morbius

Smith had been doing a fine job casting shadows with just his quiff and cheekbones, but then his performance is literally covered up with a prosthetic mask.

Meanwhile, Jared Harris, playing a sort of mentor to both Morbius and Milo, and Adria Arjona, a likeable scientific sidekick, receive even shorter shrift.

As the pace speeds up, and everything gives way to an increasingly silly plot, their roles become a nothingness.

It all ends with a daft punch-up between Morbius and Milo, who both, of course, have super-strength, super-senses, fly around, and … all the usual.

There is some visual imagination left, with the vampires leaving colourful trails in their wakes, but very little imagination of any other kind.

Which is a shame.

Morbius promised to be different, it starts off different, and, for a minute or two, it even made me watch a Leto performance without wincing.

Next time — and judging by the post-credits scenes there will be a next time — they need to go back to the lab.

The unwell genius is way more interesting than the buff bloodsucker.

From the Ipcress File to a truck in Texas…

There are resounding echoes of Sydney Pollack’s 1969 dance-marathon drama They Shoot Horses, Don’t They?, in German director Bastian Gunther’s melancholy but compelling film One Of These Days (15, 119 mins).

It is inspired by the true story of an endurance contest, sponsored by a car dealership, in a small Texas town.

A fancy truck is the prize for the person who keeps his or her hands on the vehicle for the longest time, with occasional hour-long ‘comfort breaks’ allowed, but no proper sleep.

The challenge sounds easy enough, but isn’t, as several contestants lose their grip not just on the truck, but also on sanity. 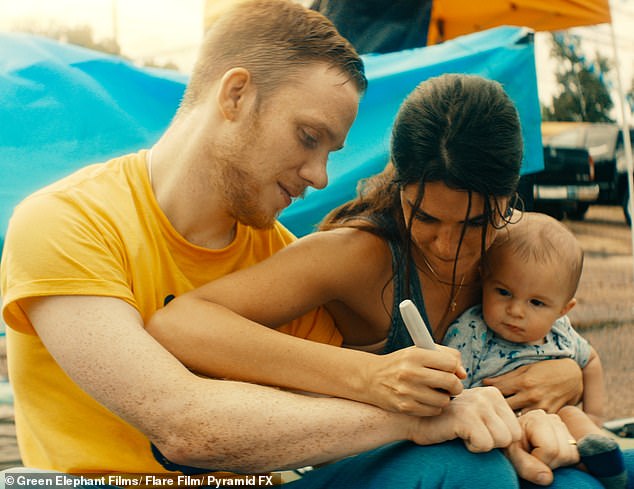 Joel Cole, pictured with family, in One Of These Days

Joe Cole, now playing a very English spy in ITV’s The Ipcress File, shows his versatility with a tremendously credible performance as a sleepy-eyed, blue-­collar local, desperate to win the truck to improve the life of his young family.

Ruth Wilson plays a benefits office employee in Ramsgate, increasingly in thrall to a charismatic man (Tom Burke) just released from a short jail term, whose claim she is dealing with.

He seems almost to sniff her low self-esteem and a toxic relationship develops to the detriment of her job, her friendships, and her health. It feels all too real.

Phil Grabsky’s sumptuous documentary Easter In Art (PG, 86 mins) does what it says on the tin, vividly telling the story of the Resurrection by looking at centuries of remarkable paintings and sculpture, from Michelangelo to Munch.

Aptly enough, it doesn’t seem like two years since the first Sonic The Hedgehog movie came out, inspired by the video-game franchise.

Time passes speedily when the turbo-charged nuisance is around.

Too speedily, in truth.

Anyway, here we are again with a predictably daft story that at least begins in inspired fashion, with Sonic’s nemesis Dr Robotnik (an off-the-leash Jim Carrey, pictured, comfortably the film’s greatest asset) marooned on a planet made of mushrooms, from which he escapes so he can get even with our hero in Montana. 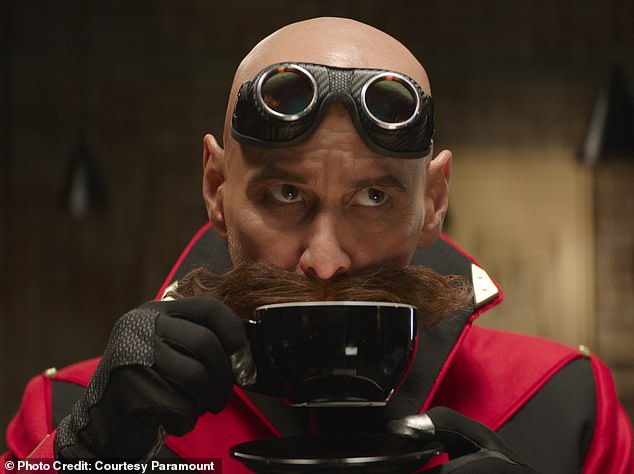 He also intends to get his evil hands on an enchanted gemstone, to which end he has an accomplice in tow: a creature called Knuckles, voiced by Idris Elba.

Some of the gags (‘time to say goodbye to this piece of shiitake planet’) will fly well over the heads of the film’s target audience, but it’s moderate family fun.

So is The Bad Guys, a jaunty Dreamworks animation about an animal gang planning a heist, based on the children’s books but evidently also influenced by Quentin Tarantino’s Reservoir Dogs.