Olaf Scholz is sworn in as Germany’s new chancellor

The German leader has come under fire for failing to show a decisive position on Russia’s military threat on the border with Ukraine. Mr Scholz defended Germany’s refusal to follow other Western countries in sending Kiev lethal weapons to defend itself against a possible Russian invasion, citing historical reasons for Berlin’s caution.

But the move was met with dismay across the bloc and in his own country.

In an article titled “Germany is gambling away its reputation of being a reliable partner”, they wrote: “Nobody in Washington is demanding that Germany send tanks east. But the fact that the German government is preventing other NATO partners from supplying Ukraine with weapons for self-defence is absurd.

“Likewise, Berlin is unable or unwilling to publicly state at least once what the announced ‘heavy costs’ of a Russian invasion might consist of.”

They added that Mr Scholz’s inaction “is damaging the transatlantic relationship more than Trump ever did”. 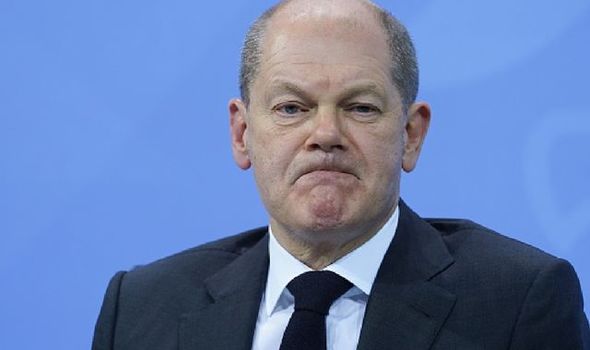 “When the American president does more to prevent a war in Europe than the German chancellor, there is something wrong with German foreign policy.”

Western leaders stepped up preparations for any Russian military action in Ukraine on Tuesday, with the US focusing on how to protect energy supplies and Britain urging other European nations to get economic sanctions ready.

Tensions remained high after NATO said on Monday it was putting forces on standby and reinforcing eastern Europe with more ships and fighter jets in response to a Russian troop build-up near its border with Ukraine.

Russia, which denies planning an attack, said it was watching with “great concern”. Kremlin spokesman Dmitry Peskov repeated Moscow’s line that the crisis is being driven by US and NATO actions, not the Russian troop build-up.

Ukraine’s President Volodymyr Zelenskiy, in a televised video address on Tuesday evening, urged his compatriots to stay calm and said work was underway to bring about a meeting between him and the leaders of Russia, Germany and France.

“There are no rose-coloured glasses, no childish illusions, everything is not simple…. But there is hope,” he said.

The United States and the European Union have threatened economic sanctions if Russia launches an invasion and Western leaders say unity is paramount, though differences have emerged among European nations over how best to respond.

In Washington, senior Biden administration officials said the United States was in talks with major energy-producing countries and companies around the world over a potential diversion of supplies to Europe if Russia invades Ukraine.

Russia denies it is planning an attack on Ukraine (Image: GETTY)

Speaking to reporters on a call, the officials did not name the countries or companies involved in discussions to protect supplies to Europe but said they included a broad range of suppliers, including sellers of liquefied natural gas (LNG).

“We’ve been working to identify additional volumes of non- Russian natural gas from various areas of the world; from North Africa and the Middle East to Asia and the United States,” a senior administration official said, on condition of anonymity.

The EU depends on Russia for around a third of its gas supplies. Any interruptions to its Russian imports would exacerbate an existing energy crisis caused by shortages.

Russia has tens of thousands of troops near Ukraine and is demanding security guarantees from the West, including a promise by NATO never to admit Ukraine. Moscow sees the former Soviet republic as a buffer between Russia and NATO countries.

French President Emmanuel Macron, speaking in Berlin on Tuesday, said he would seek clarification over Russia’s intentions towards Ukraine in a phone call with President Vladimir Putin set for Friday.

Mr Macron and Mr Scholz reiterated that Moscow would pay a high price if it attacked Ukraine.

Political advisers from Russia, Ukraine, Germany and France are due to meet in Paris today under the so-called ‘Normandy format’ to seek ways of ending the conflict in eastern Ukraine between Kyiv’s forces and pro-Russian separatists.