Omicron is causing over 90% of new COVID-19 cases in New York, Florida, Texas, Washington, and more

The Omicron variant is now causing about three in four new COVID-19 cases nationwide, and 90% of cases in at least five states, the Centers for Disease Control and Prevention (CDC) announced on Monday.

In New York and New Jersey, the Midwest, the Southeast, the Gulf Coast, and the Northwest, the Omicron variant now account for more than 90 percent of new cases.

While other regions currently have lower Omicron prevalence, the variant is spreading fast enough that officials expect it will be dominant throughout the country within weeks.

Even if it causes more mild disease, high numbers of cases can still create an enormous burden for already-overstretched hospitals. 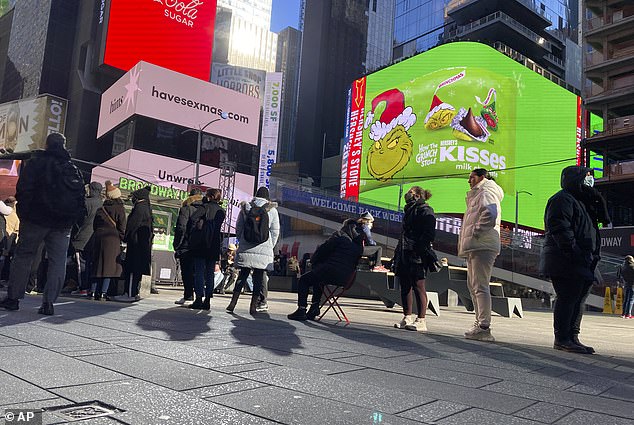 New York, along with New Jersey, Florida, Texas, Washington, and other states, has over 90% of its new Covid cases now caused by Omicron, according to the CDC. Pictured: New Yorkers wait in line for Covid tests in Times Square as cases surge, December 2021 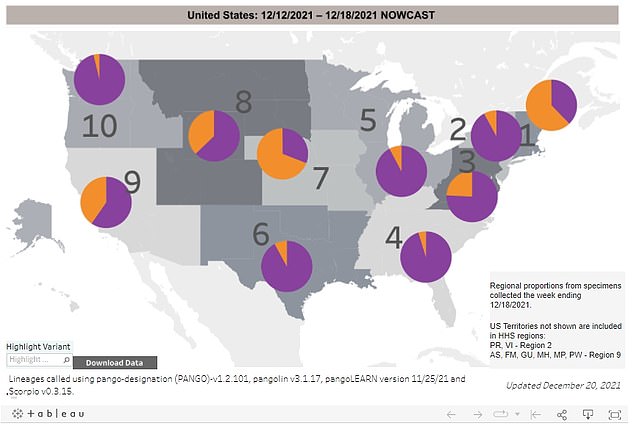 The Omicron variant (purple pie chart slices) has overtaken the Delta variant (orange slices) in almost every region of the country, save parts of the Northeast and Midwest 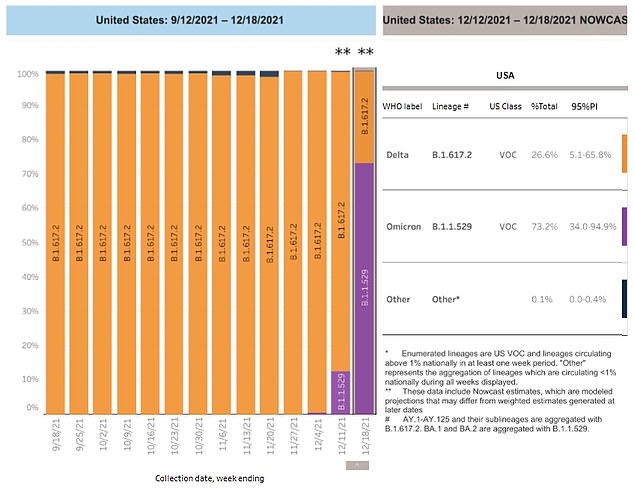 The Omicron variant was first identified in South Africa and Botswana in late November. Within a month, it’s become the dominant variant in the U.S.

Omicron’s capacity to spread more rapidly than any other variant has allowed it to take over in a matter of weeks, new CDC data show.

As of December 18, the Omicron variant is causing 73 percent of new Covid cases nationwide.

That’s about a six-fold increase from the prior week, when it caused 13 percent of new cases.

The CDC also updated its estimates for previous weeks, showing that Omicron was causing 0.1 percent of new Covid cases in the week ending November 27.

In other words, Omicron was already in the U.S. and spreading widely on Thanksgiving.

The New York City area has been a clear Omicron hotspot in recent weeks.

Last week, the CDC announced that Omicron was causing 13 percent of new Covid cases in New York and New Jersey.

This week, the CDC reports that 92 percent of new Covid cases in the region are caused by Omicron.

Omicron’s spread in NYC was likely aided by Anime NYC, an anime convention held in Manhattan during the weekend before Thanksgiving.

Several Omicron cases have been connected to the convention, including among attendees who traveled from other states.

Last week, health officials in Orlando, Florida found that the surrounding county’s wastewater samples were dominated by Omicron – even though the variant had yet to be identified in many clinical cases.

Hospital systems in Florida are anticipating a surge in cases, the Orlando Sentinel reports.

Michigan hospitals are already overwhelmed, as the state has seen record case and hospitalization numbers in recent weeks – higher than at any other point in the pandemic.

On Monday, Texas officials reported that an Omicron patient had died. The patient, a man in his 50s, was unvaccinated.

The case is the first Omicron death to be reported in the U.S.

Texas and surrounding states are bracing for a surge of Omicron cases, though hospitalization numbers are currently lower than in other regions.

The Northwest – Washington, Oregon, Idaho, and Alaska – has the highest share of cases caused by Omicron of any region, at 96 percent.

Idaho’s Panhandle region emerged from crisis standards of care on Monday after more than 100 days in this precarious position, according to the Idaho Capital Sun.

‘While this is good news for Idaho, we’re still watching the omicron variant very closely because this is a precarious time,’ said Dave Jeppesen, director of Idaho’s public health department.

‘Omicron seems to spread more easily between people,’ he said, ‘and we all need to keep taking precautions against COVID-19 by getting vaccinated or getting a booster dose, wearing masks in crowded areas, physically distancing from others, washing our hands frequently, and staying home if we’re sick to avoid overwhelming our health care systems again.’ 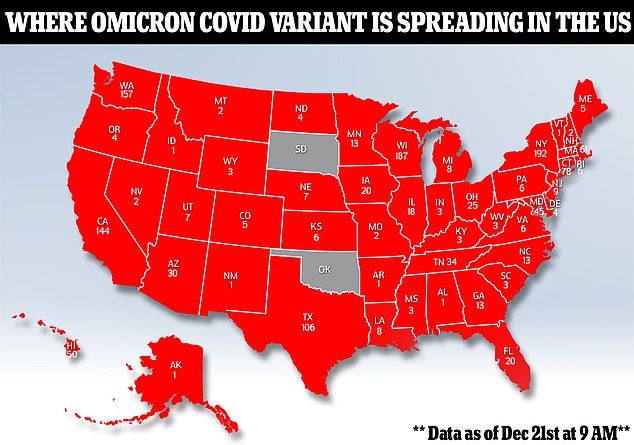 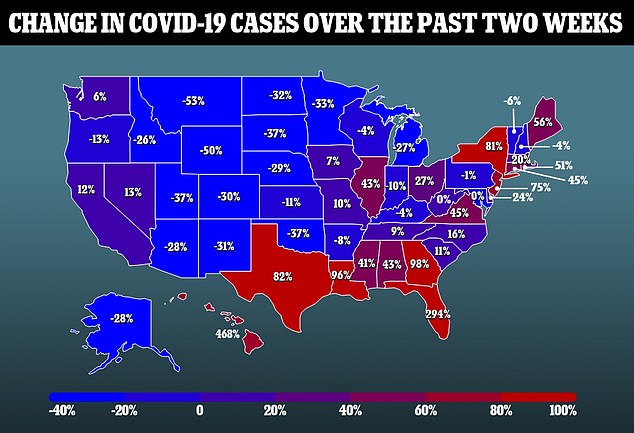 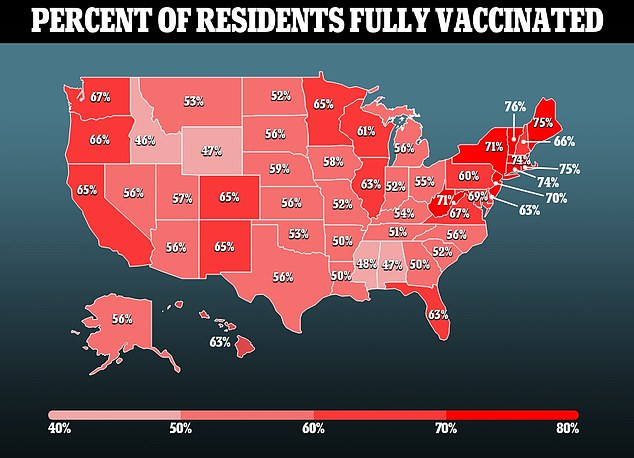 New England, the mid-Atlantic region, parts of the Midwest, and the Southwest all have lower shares of cases caused by Omicron, according to CDC data.

The region including Iowa, Kansas, Missouri, and Nebraska has the lowest share of Omicron cases, at 30 percent.

Still, at the rate that Omicron has spread through the country, even this region will likely be dominated by the variant within the next week.

Scientists estimate that Omicron spreads three to five times as fast as Delta, making it the most highly contagious variant by far.

Preliminary research has shown that Omicron may cause more mild disease than other variants.

One South African study found that Omicron patients had a 29 percent lower risk of hospitalization than patients infected in the country’s spring 2020 wave.

However, because Omicron is so transmissible, scientists are concerned that the U.S. could see such a high number of cases in such a short time that hospitals are still overwhelmed by the variant.

Booster shots can aid in protecting against Omicron infection, studies have shown, while one or two vaccine doses reduce the risk of severe disease from this variant.

Victory for partners supporting their wives and girlfriends in labour

'Boris going to NI – God help us all!' Ryanair boss blasts PM 'my sympathies with EU!'