Personal trainer father, 47, is given less than 18 months to live

A personal trainer has been given 18 months to live after an alleged ‘gym injury’ turned out to be cancer in his spine.

Mark Potter, 47, from Chingford in Essex, started feeling a numbness in his calves at the start of the year.

But the former champion boxer — who was squatting 200kg at the time — put it down to a pinched nerve from training too hard and shrugged it off.

When the numbness started spreading up his leg, however, the father went to see his GP and was diagnosed with stage four stomach cancer.

Doctors told him it had also spread to his spine, with tumours there compressing nerves leading to the loss of feeling in his legs.

The boxing referee is now receiving chemotherapy once a fortnight to treat the cancer, and has switched his diet not to include any sugar and only a little meat.

His family is ‘hopeful’ the treatment will work, with wife Hannah, 45, who is also a personal trainer saying: ‘We’re staying positive, and we still think he can beat this.’

Family friend Adrian Finlay has set up a GoFundMe page to replace lost wages and allow the couple to spend more time together. It has so far raised £18,800. 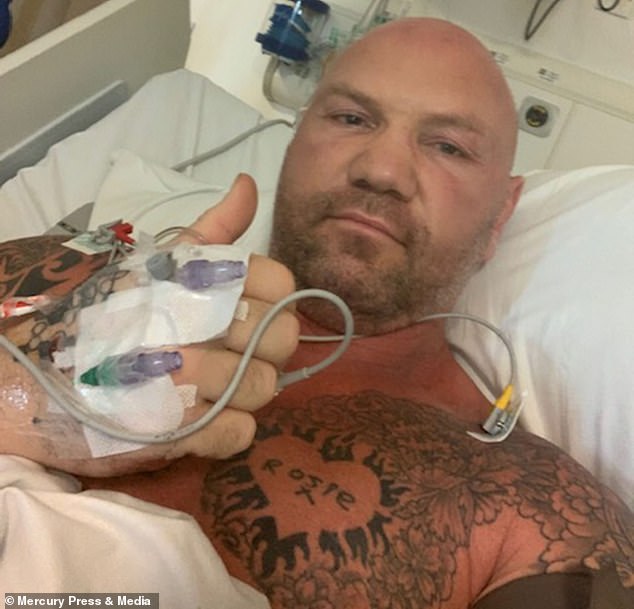 Mark Potter, 47, from Essex, started feeling a numbness in his calves at the start of the year but put it down to training too hard. Tests later revealed it was caused by stomach cancer, triggering tumours that had spread to his spine and were compressing nerves 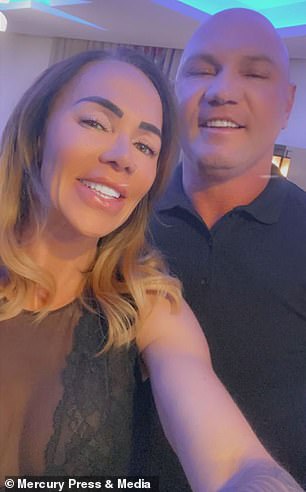 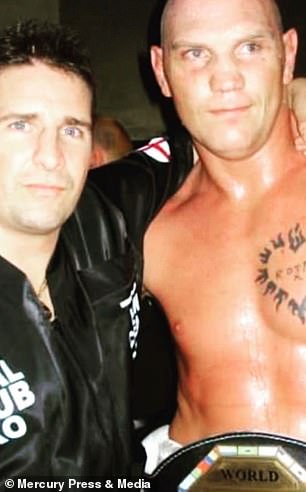 Mr Potter’s wife Hannah (left) and the rest of the family remain hopeful he will make a full recovery. Friends described him as the ‘fittest and healthiest’ man they know. Pictured right, Mr Potter at a boxing match. He won 21 out of 26 he competed in, Mr Potter says

Stomach cancer is not common in the UK, with about 6,500 people diagnosed with the condition every year. In the US, it is about 26,000.

About one in every two people who are diagnosed with stomach cancer survive for at least a year, according to Cancer Research UK.

But when the cancer reaches stage four only about 20 in 100 people will live for more than 12 months following diagnosis.

What are the symptoms of stomach cancer?

Stomach cancer is not very common in the UK, with about 6,500 cases diagnosed every year.

The NHS says many symptoms associated with the condition could also be triggered by other illnesses.

Mrs Potter said: ‘When they told us the diagnosis, I had a complete meltdown.

‘He has tumours in his stomach that spread to his spine, which has caused the numbness.

‘When they told us, you obviously hope for the best so I thought it might have been stage two.

‘After being told it was stage four, the doctor said he maybe have 18 months to live, with treatment, but we’re staying positive, and we still think he can beat this.’

Friends and family described Mr Potter as having a ‘heart of gold’, and being one of the ‘fittest and healthiest’ people they knew.

At the time of his diagnosis, he could run six kilometres in 30 minutes and squat 200kgs six times in a row.

Mr Potter was also able to deadlift 200kg ten times in a row.

For comparison, the average man without training can squat 63kgs and deadlift 70kgs estimates suggest.

During his career as a boxer, Mr Potter has also won 21 of 26 professional fights he competed in. He also took part in MMA fighting and kick-boxing.

Describing when he first noticed something was not right, his wife said: ‘When he said his calf was feeling really weird, I thought it must be a pinched nerve or something.

‘He was regularly doing squats and deadlifts, so we just assumed it was down to that.’

The family has also changed his diet which they said may help with his treatment, with Mr Potter now mostly eating plant-based foods.

Friend Mr Finlay said: ‘As far as the NHS are concerned, the treatment Mark is going to receive will only prolong the inevitable.

‘I was absolutely furious at the matter-of-fact way such devastating news was delivered, without even suggesting that there were additional therapies that can be explored.

‘Stage four cancer does not have to mean a death sentence… many people have survived after being diagnosed with cancer exactly like this.’ 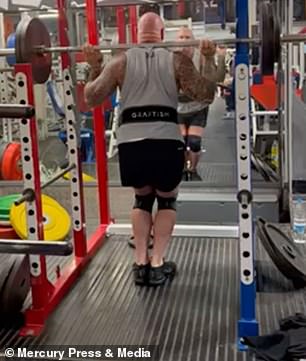 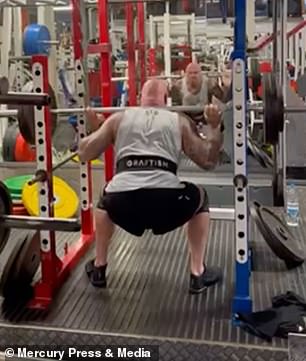 Pictured above is Mr Potter doing squats at his gym. Before the diagnosis he could lift as much as 200kgs for six repetitions 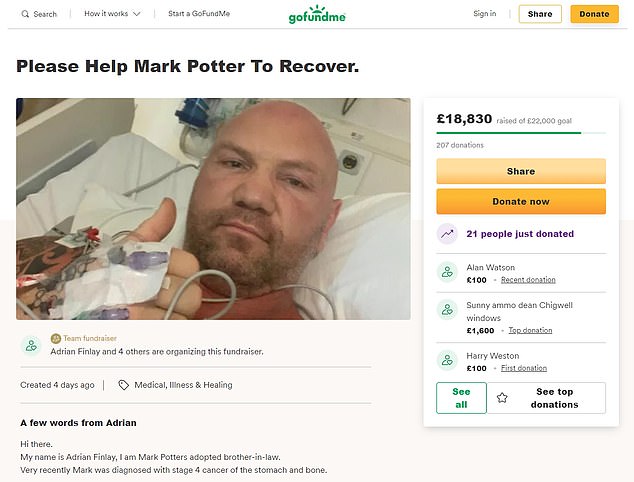 Friends have launched a GoFundMe page to raise money to allow the couple to spend more time together by replacing lost wages. It has so far raised £18,800

Warning signs for stomach cancer include regular indigestion, loss of appetite and pain in the tummy area.

But the NHS says these symptoms are ‘very common’, and could actually indicate other conditions except for stomach cancer.

In very rare cases the first symptom of stomach cancer may also be triggered after it has spread to the spine.

Medical literature mentions a case where a 60-year-old woman was diagnosed with stomach cancer following backache. In a second, a 62-year-old man’s first symptom was a swelling in the joint of the thumb.

Symptoms of tumours in the spine include the loss of feeling in limbs as the tumours start to compress key nerves.

Smoking, being overweight, and eating too much salt and red or processed meat all raise someone’s risk of suffering stomach cancer.