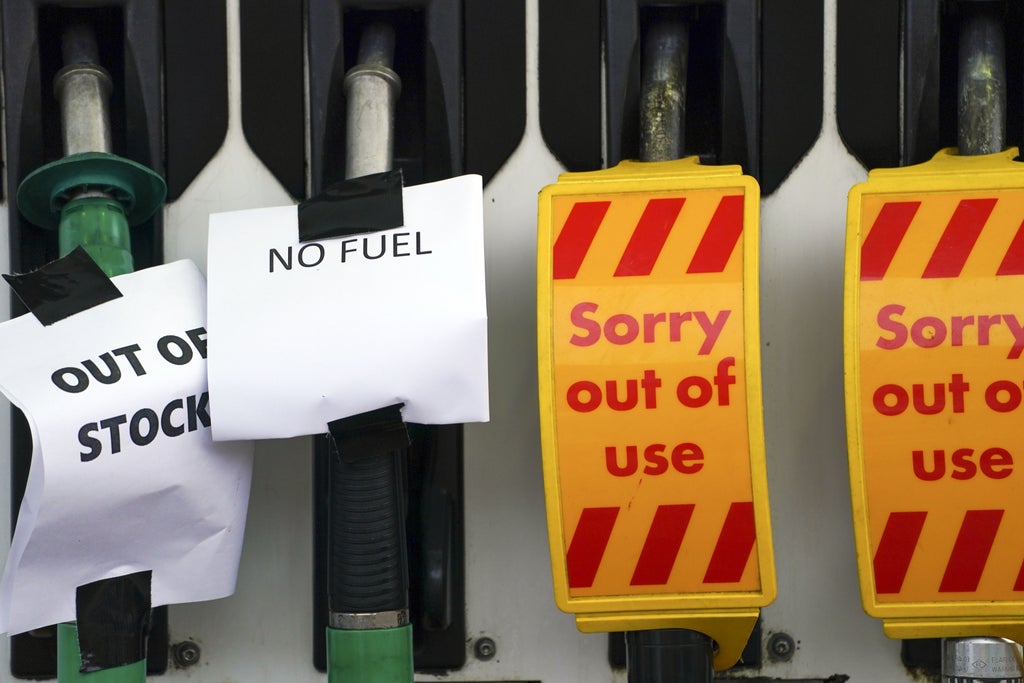 The fuel crisis has escalated with at least half of petrol stations not on motorways believed to have run dry, following a weekend of panic-buying by spooked motorists.

The Petrol Retailers Association reported the alarming survey of its independent members – as oil giant BP warned that almost one third of its sites had no supplies.

Government pleas for drivers to stop filling their cars “when they don’t need it” fell on deaf ears as long queues formed at forecourts, operators rationed supplies – and police were called to one scuffle in London.

Grant Shapps, the transport secretary, sparked anger when he claimed hauliers were responsible for the chaos, despite the government having admitted to a lack of lorry drivers.

Brian Madderson, the PRA’s chairman, revealed the Sunday morning survey of its members, who make up the majority of the UK’s 8,000-odd petrol stations.

“They serve the main roads, the rural areas, the urban roads, and anywhere between 50 per cent and 90 per cent of their forecourts are currently dry – and those that aren’t dry are partly dry and running out soon,” he told the BBC.

“One of them mentioned to me that yesterday they had a 500 per cent increase in demand compared to a week ago, which is quite extraordinary.”

BP, which operates 1,200 petrol stations, said: “With the intense demand seen over the past two days, we estimate that around 30 per cent of sites in this network do not currently have either of the main grades of fuel.”

Earlier, Mr Shapps was accused of a “disgraceful attack” on hard-pressed hauliers and of “shamefully passing the buck” for the queues.

The row blew up after The Mail on Sunday newspaper quoted a government source claiming the Road Haulage Association (RHA) is “entirely responsible for this panic and chaos”.

The transport secretary backed the claim, saying: “There was a meeting which took place about 10 days ago, a private meeting, in which one of the haulage associations decided to leak the details to media.

“And that has created, as we have seen, quite a large degree of concern as people naturally react to those things.”

Calling the leak “irresponsible”, Mr Shapps told the BBC’s Andrew Marr programme: “The good news is there is plenty of fuel. The bad news is, if everyone carries on buying it when they don’t need it, then we will continue to have queues.”

But the RHA hit back quickly, pointing out its managing director Rod McKenzie had not even been at the meeting where a BP executive had discussed stock levels.

“He was not, as the government source claimed, “aware of the comments” and certainly did not “weaponise” them in subsequent TV interviews,” a statement said.

“Indeed he repeatedly stressed the need not to panic buy and that there were adequate fuel stocks.

“The RHA believes this disgraceful attack on a member of its staff is an attempt to divert attention away from their recent handling of the driver shortage crisis.”

Sarah Olney, the Liberal Democrat business spokesperson, said: “Grant Shapps is shamefully passing the buck for the government’s own failures.

“The Conservatives have repeatedly ignored calls from businesses to address the shortage of drivers. It is a bit rich for ministers to now blame the public and the road haulage industry for the mess we find ourselves in.”

Mr Shapps comments came after the announcement of emergency visas for foreign lorry drivers to come to the UK to ease the crisis was dismissed as a damp squib.

As expected, the offer will be made to 5,000 HGV drivers – plus 5,500 poultry workers – but the visas will run out Christmas Eve, triggering criticism they are too little, too late.

Keir Starmer suggested 100,000 foreign drivers are needed – the RHA estimate of the shortfall – saying: “We are going to have to do that. We have to issue enough visas to cover the number of drivers that we need.”

The Labour leader said: “I’m astonished the government, knowing the situation, is not acting today. The prime minister needs to say today what he is going to do.”

Meanwhile, a poultry association said big firms have already scaled back production of turkeys for the festive season, because they would not have enough staff to for more orders.

Kate Martin, chairwoman of the Traditional Farm Fresh Turkey Association, said: “It’s looking like there is a national shortage of turkeys when we’re talking about supermarket shelves, rather than buying direct from your farm.”

Footage circulated on social media showed two men in helmets tussling with each other at a petrol station in north London, before the police were called to the scene.

A man was arrested on suspicion of assault and taken into custody, but no injuries were reported.

Official: US at turning point in dealing with Myanmar crisis

Warnings of ‘debt crisis’ as millions fall into arrears during pandemic