Philadelphia has scrapped its mask mandate only four days after imposing the order, city officials say — as U.S. Covid deaths drop 29 per cent in a week.

The 1.5million-strong city was blasted when it brought back coverings for schools, restaurants and public buildings on Monday, with even scientists who previously backed mandates warning against the move.

But now the mayor has dropped the compulsory requirement, with a spokeswoman saying today they would instead be ‘strongly recommended’. Philadelphia’s Covid infections are now double the levels when the mask mandate was imposed, while hospitalizations are up by about a third.

There is mounting turmoil among Democrat-led cities over whether to re-impose face masks, with Los Angeles today becoming the latest to bring back the masks on public transport, following New York, San Francisco and Boston.

A federal judge in Florida struck down the mask mandate for public transport at the national level on Monday, though the Department of Justice is expected to appeal the decision.

Covid cases in America have remained flat over the past week, but deaths are plummeting, down 29 percent to 363 per day – the lowest daily death figures since August.

Cases are ticking up in 41 states, with the fastest increases in Michigan (up 184 percent), Kansas (up 169 percent) and Nebraska (up 134 percent). Mississippi, Idaho, Wyoming, Arizona, Missouri, Oklahoma, Kentucky, South Carolina and Texas are all seeing drops in infection rates. 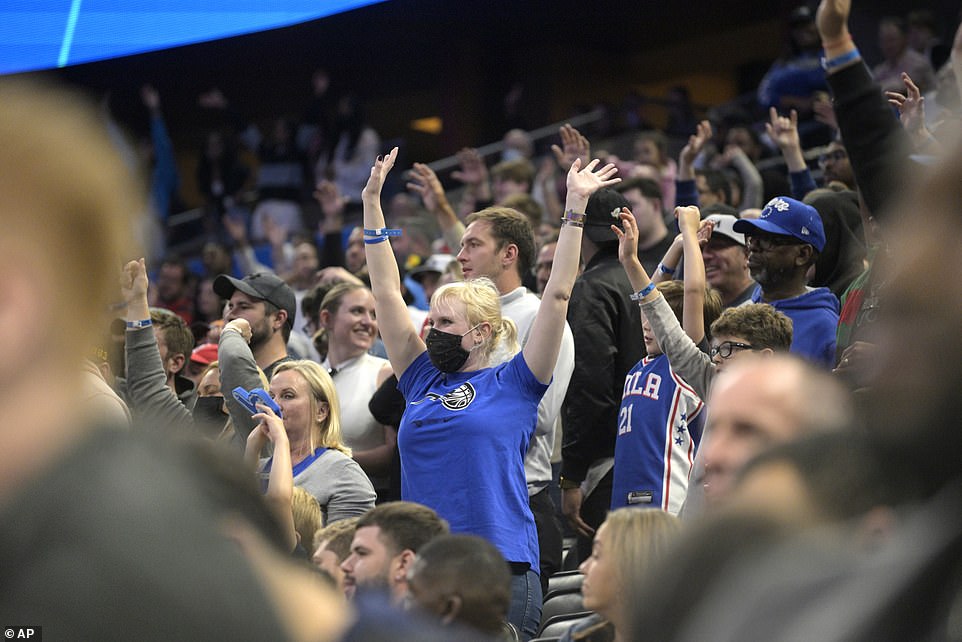 Philadelphia has today announced it will drop its indoor mask mandate, instead only ‘strongly encouraging’ their use. Pictured: NBA fans wear masks while watching a game at Philadelphia’s Wells Fargo Center 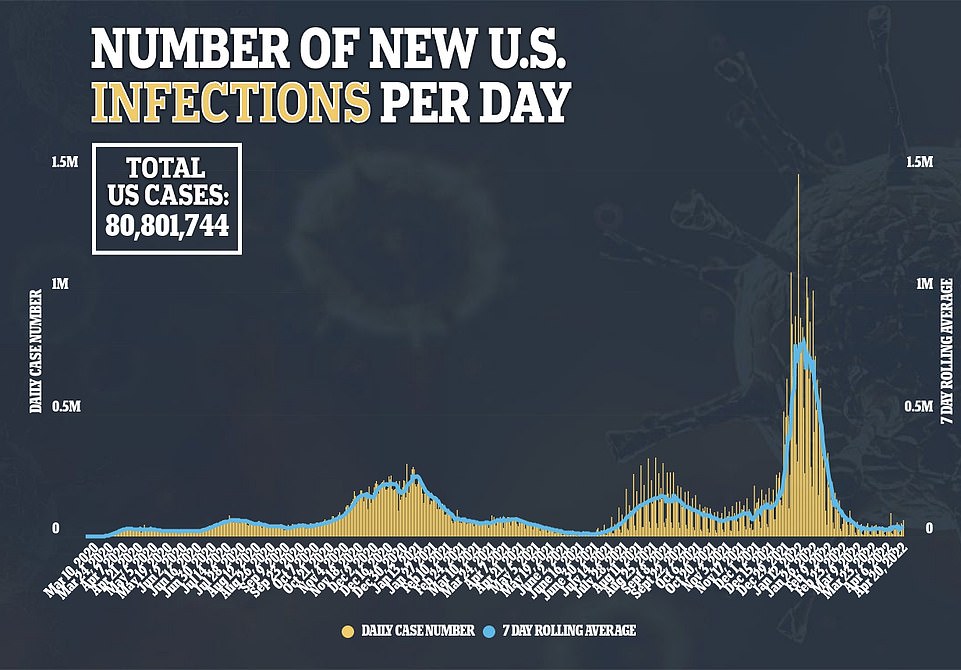 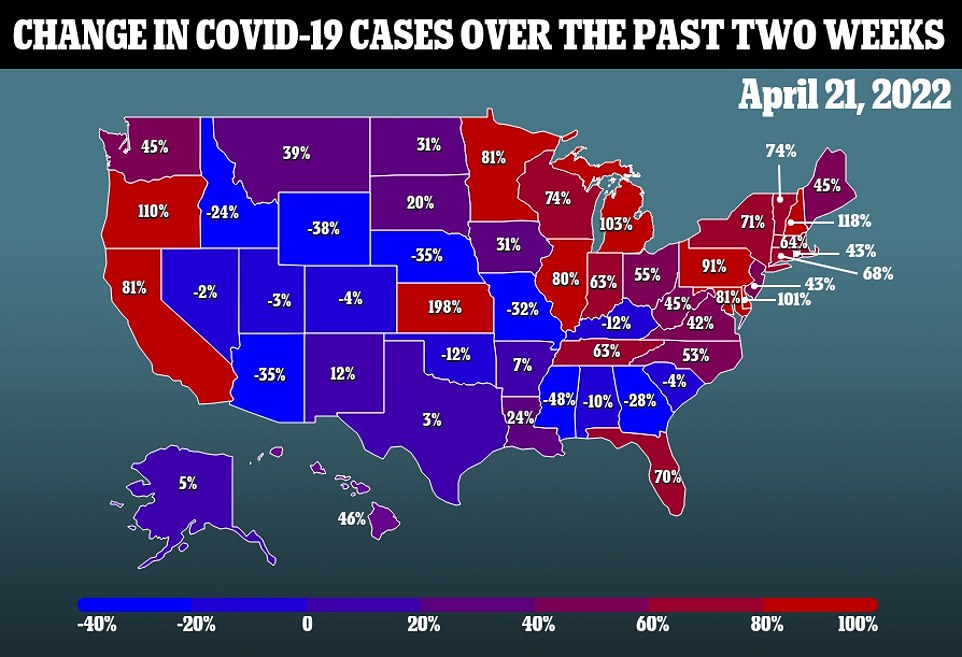 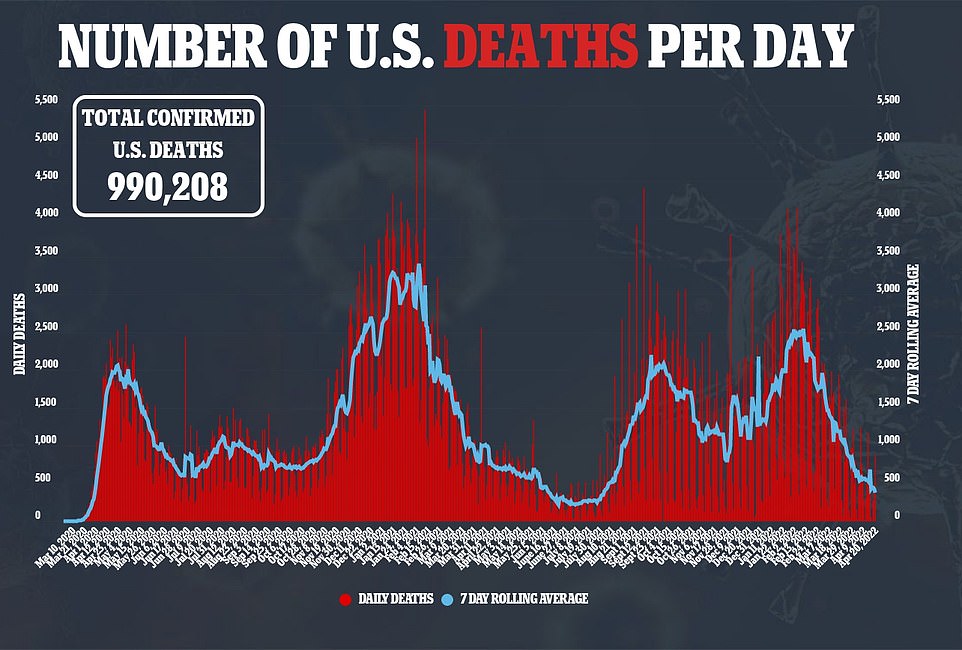 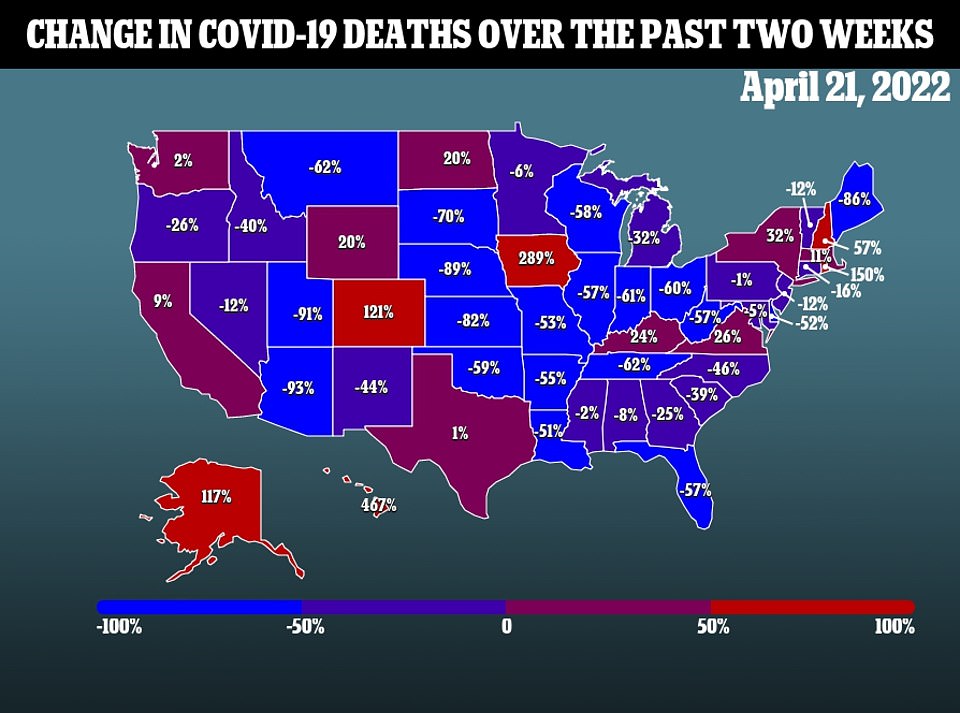 ‘EFFECTIVE IMMEDIATELY: Due to a recent leveling-off of case counts and a decrease in COVID-19 hospitalizations in the City, masks are strongly recommended, but are no longer required in public indoor settings, with the exception of healthcare and congregate settings,’ Philadelphia’s Department of Public Health wrote on Twitter.

‘The Health Department strongly recommends residents & visitors wear a mask in indoor public settings, and get vaccinated and/or boosted if you’re eligible. Thank you, Philly for stepping up once again and responding to this pandemic with solidarity and care for each other.’

Revealing the end of Philadelphia’s mask mandate yesterday, a spokeswoman for mayor Jim Kenney said: ‘Due to decreasing hospitalizations and a leveling of case counts, the City will move to strongly recommending masks in indoor public spaces as opposed to a mask mandate.

‘Given the latest data, the Board of Health voted to rescind the mandate.’

Philadelphia announced it was imposing the mask mandate on April 11, just over a month after it dropped the previous order, citing a surge in Covid cases and concerns how these would affect its more vulnerable communities.

Hospitalizations in the city have also jumped since the mandate was announced, with officials announcing last Monday that there were 46 hospitalized patients in the city. According to most recent data – 65 Philadelphians are now hospitalized with Covid, a 40 percent jump.

Covid deaths figures are near-zero in the City of Brotherly Love, with less than one resident succumbing to the virus every day.

Dr Leana Wen, a health policy expert at the George Washington University in the District of Columbia,who has previously supported mask mandates, warned at the time that the Center for Disease Control and Prevention (CDC) clearly had Philadelphia ‘in the green’.

‘With readily available and effective vaccines, why aren’t we switching from case counts to the better metric of hospitalizations?’ she said.

On Thursday, Los Angeles became the latest to announce it would reimpose face masks on public transport from Friday.

Public Health Director Barbara Ferrer said the order was based on the CDC’s recommendation that mask wearing on transit remained an ‘essential step’ to preventing the spread of Covid.

‘They are experts,’ she told reporters during an online briefing. ‘They made a determination that at this point having that requirement in place is necessary for the public’s health, and that resonates with us.’