A TikTok doctor has spoken out about a type of breast implants that can put patients at risk of a rare cancer.

Dr Anthony Youn, 48, from Detroit, is a board-certified plastic surgeon – known as ‘America’s Holistic Plastic Surgeon’  – who regularly shares videos discussing health and surgical topics with his 7.7 million followers on the app.

In a recent video, he shared a case study, discussing how he had operated on a patient because her textured breast implants had caused extreme drooping (known as a ‘Snoopy’s nose’ deformity).

He said the implants were also putting her at risk of developing anaplastic large cell lymphoma (ALCL) – a rare cancer, which is not a type of breast cancer, but a form of non-Hodgkin lymphoma. 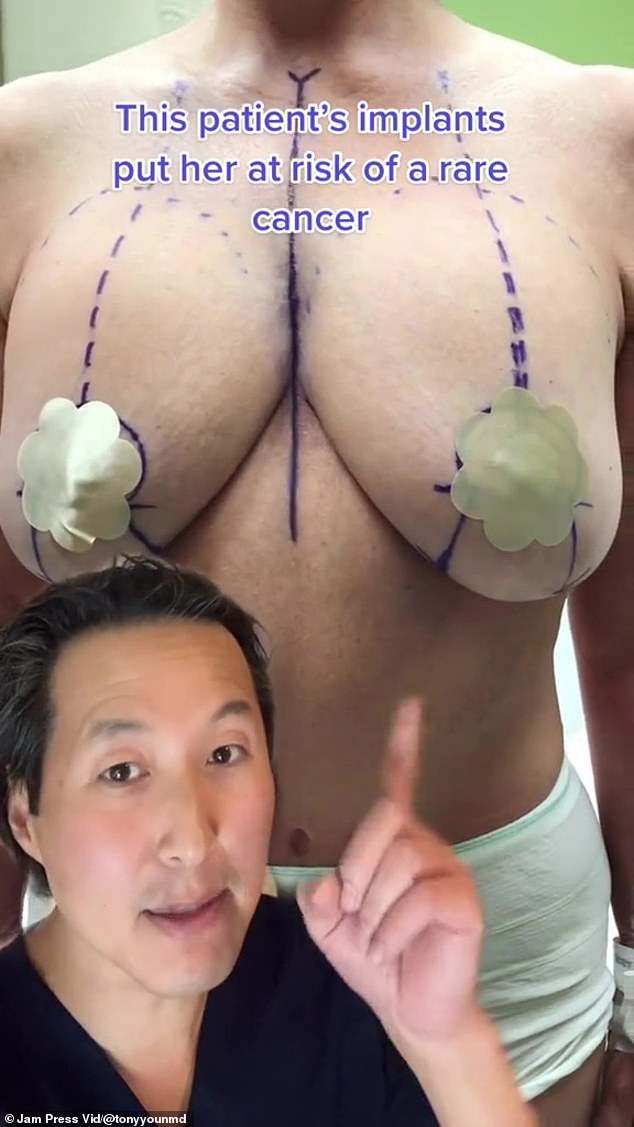 A recent video by board-certified plastic surgeon Dr Youn, who has a huge TikTok following, revealed a specific type of breast implant that can leading to sagging and put patients at risk of a rare type of cancer 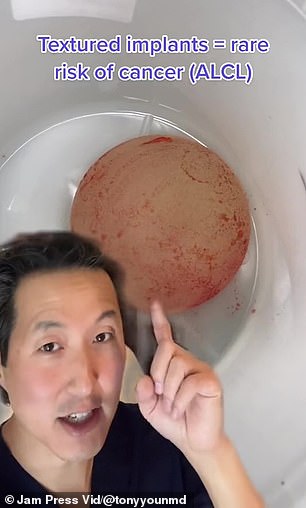 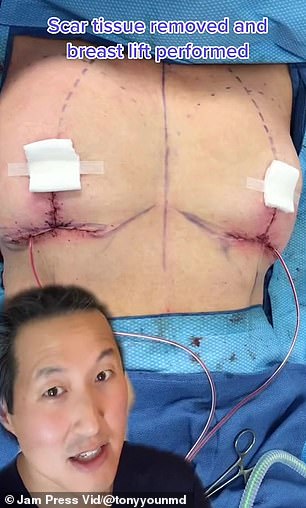 In the video, Dr Youn shared images of his patient after he’d removed the implants, as well as posting a picture of one of the implants itself

It can develop in the breasts of people who have had breast implants, most commonly in those who have textured implants as opposed to smooth ones.

Textured implants have a rough surface (which some describe as being like sandpaper).

Doctors who choose them often do so because the surface adheres to surrounding tissues, meaning they can hold their position better than smooth.

Their key benefit is that they are less prone to capsular contracture than their smooth counterpart (when scar tissue develops around the implant), which is the leading reason people have the surgery reversed. 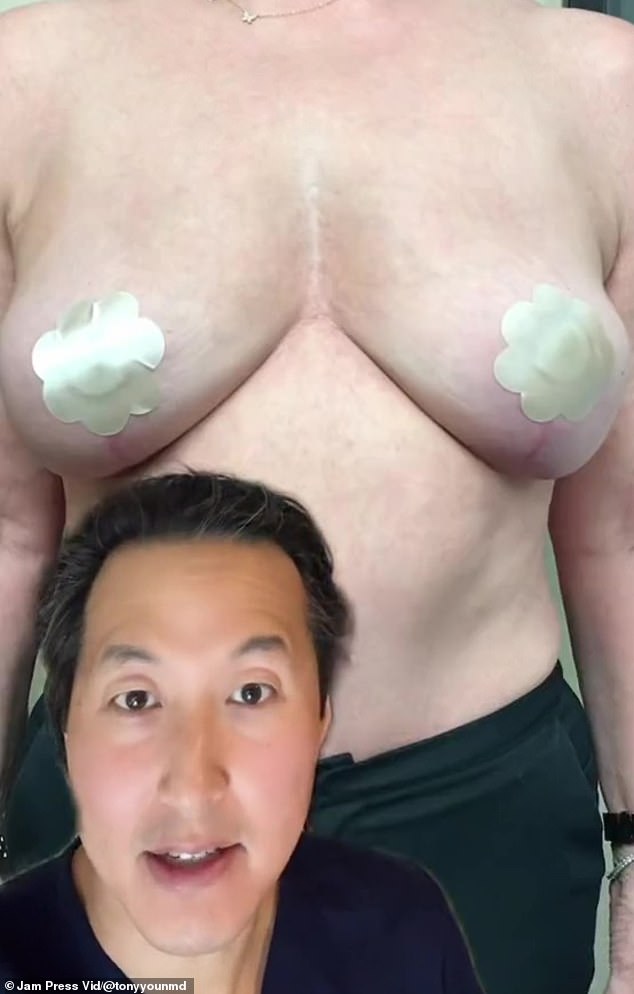 At the end of the video, Dr Youn shared an image of his patient seven weeks after she’d undergone surgery with him, removing the implants and performing a breast uplift

Numerous followers took to the video to leave positive comments, praising the surgeon’s work, and also thanking him for raising awareness

According to the NHS, the vast majority of breast implants used in the UK and Australia are textured (some 90 per cent), while in the US, smooth are most commonly used (in around 87 per cent of cases).

However, while breast implant-associated anaplastic large cell lymphoma (BIA-ALCL) is thought to be extremely rare – in the UK, the estimated risk is one per 20,000 – the increased risk has become more prevalent in the debate about which type of implant should be used in Europe and the UK.

The abnormal T-cells (lymphoma cells) usually build up in lymph nodes, but they can affect other parts of the body.

It can develop in the breasts of people who have had breast implants. BIA-ALCL usually develops about 7 to 10 years after implant surgery but can sometimes happen earlier.

Although BIA-ALCL develops in the breast, it is not a type of breast cancer. BIA-ALCL is usually slow-growing.

According to the NHS, people with breast implants do not need to have them removed if they aren’t showing any symptoms of this cancer.

However, they should look out for symptoms including lumps, swelling or distortions through regular self-examination, and speak to a medical professional if they are concerned.

The patient in Dr Youn’s video had had her textured implants put in six years ago by a different surgeon and came to Dr Youn for help, due to the appearance of her chest following the surgery.

Dr Youn diagnosed her with a ‘Snoopy deformity’, which is when the implant sits too high and tissue drops, resembling cartoon character Snoopy’s nose.

He also performed a revision of her breast lift, sharing a post-op photo with viewers.

At the end of the vide, the doctor shares an image of the breasts seven weeks later.

He says: ‘She’s no longer worried about ALCL and her Snoopy deformity is gone.’

After uploading the video to his TikTok (@tonyyounmd), it has racked up more 303,000 views, 26,000 likes and numerous comments.

One user said: ‘Thank you for spreading awareness on this type of cancer.’

Another person commented: ‘I went through this. I had a double mastectomy and textured implants put in and developed a tumour, two years ago I had to have them removed for recall.’

Another person commented: ‘You do great work, talented,’ followed by a clapping emoji.

‘That’s incredible work!!’ someone else agreed.

Another social media user added: ‘So much more beautiful and healthy now!’