PM'S BATTLE FOR SURVIVAL: Defiant Boris vows to FIGHT ON and SLASH taxes for millions 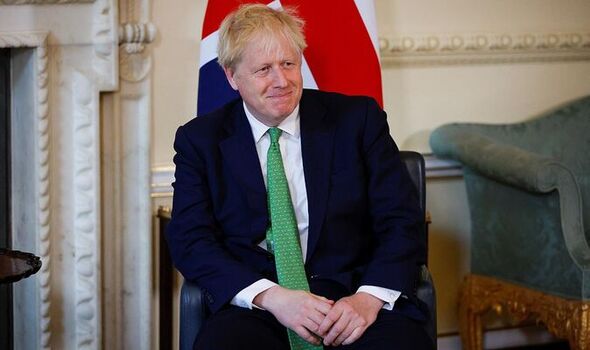 But he insisted to allies the failed bid to force him out of Downing Street marked a “moment of liberation” that will allow his Government to pursue a true-blue Tory agenda to win the next general election. Mr Johnson was said to be in a “resolute and determined” mood and carrying on with “business as usual” following the extraordinary acts of disloyalty by the two senior ministers.

He moved swiftly to reshape the Cabinet by appointing Education Secretary Nadim Zahawi as Chancellor and close ally Steve Barclay, previously the Downing Street chief of staff, as the new Health Secretary.

And Mr Johnson immediately began drawing up plans for a bold Government relaunch focusing on slashing the tax bills of millions of households struggling through the cost of living crisis, building on the hike in the National Insurance threshold due to come into force on Wednesday.

Close allies accused Mr Sunak of an “inflexible” approach to running the Treasury in recent months had left the country with the highest tax burden since the aftermath of the Second World War.

Boris could not know what was facing him at Cabinet yesterday morning (Image: Andrew Parsons / No 10 Downing Street)

A source close to Mr Raab said he was “loyal” to Mr Johnson, while an ally of Ms Patel said “she’s staying”.

An ally of Foreign Secretary Liz Truss, viewed as a potential leadership candidate, said she was “100 percent behind the PM”.

A source close to Ben Wallace said: “The Defence Secretary is not resigning.”

Culture Secretary Nadine Dorries tweeted: “I’m not sure anyone actually doubted this, however, I am 100 percent behind Boris Johnson, the PM who consistently gets all the big decisions right.”

Brexit Opportunities Minister Jacob Rees-Mogg said: “I’m fully supporting the Prime Minister, I think that he is the right man for the job.”

He added: “The Prime Minister won a large mandate in a general election, a vote of the British people and that should not be taken away from him because a number of people resign.”

Mr Johnson was forced to make a public apology after it emerged he had forgotten about being told of previous allegations of “inappropriate” conduct.

Mr Sunak and Mr Javid both said the episode had destroyed their confidence in the Prime Minister’s leadership. Sources close to both Cabinet ministers insisted their departures were not coordinated.

In his resignation letter, the outgoing chancellor claimed the Government was not being “conducted properly, competently and seriously.”

He wrote: “The public rightly expect government to be conducted properly, competently and seriously.

“I recognise this may be my last ministerial job, but I believe these standards are worth fighting for and that is why I am resigning.”

He added: “In preparation for our proposed joint speech on the economy next week, it has become clear to me that our approaches are fundamentally too different.

“I am sad to be leaving government but I have reluctantly come to the conclusion that we cannot continue like this.”

Mr Javid, in his resignation letter, told the Prime Minister that the recent vote of confidence was a “moment for humility, grip and new direction”.

He wrote: “I regret to say, however, that it is clear to me that this situation will not change under your leadership – and you have therefore lost my confidence too.”

He also told Boris Johnson: “The country needs a strong and principled Conservative Party, and the Party is bigger than any one individual. I served you loyally and as a friend, but we all serve the country first.

“When made to choose between those loyalties there can only be one answer.”

In other departures last night, Bim Afolami quit as a Conservative Party vice chairman, Andrew Murrison stepped down from his post as trade envoy to Morocco and Jonathan Gullis, Nicola Richards and Saqib Bhatti stood down as ministerial aides.

“With sadness, I believe the interests of the country, our new-found self government and the Conservative Party would be best served by new leadership and a new prime minister,” Lord Frost said in a statement.

Tory backbencher Andrew Bridgen, an opponent of the Prime Minister, said that rebels will attempt to seize control of the parliamentary party’s ruling 1922 Committee over the coming week to try to trigger rerun of the recent party leadership confidence vote.

“There will be plenty of time for the new committee to be constituted, meet, and if necessary, change the rules regarding confidence votes within one year,” he said.

He also predicted more resignations and claimed Mr Johnson will be “shown the door”.

Labour leader Sir Keir Starmer said in a statement: “After all the sleaze, the scandals and the failure, it’s clear that this Government is now collapsing. Tory cabinet ministers have known all along who this Prime Minister is.”