Coronavirus: ‘Prepare for another surge in winter’ says Nabarro

QuantuMDx, a progressive medical technology company based in Newcastle Upon Tyne, has created a PCR Respiratory Panel which can identify coronavirus, flu A, flu B and Respiratory syncytial virus (RSV) with accuracy and speed. The launch comes amid a fierce resurgence of RSV and flu following the end of the pandemic. RSV kills 100,000 children under the age of five every year worldwide, according to the latest data as a tidal wave of cases hits the UK.

The British Lung Foundation reported an estimated 1,000 children had needed hospital care for the condition in England alone in just three months.

Jonathan O’Halloran, Chief Executive Officer, QuantuMDx, told Express.co.uk it was important to identify whether a patient has Covid, flu or RSV because of the risk of co-infections which “amp up the severity of the disease”.

The diseases have very similar symptoms but “the last thing you want is to put a flu patient in a Covid ward or a Covid patient in a flu ward,” he explained.

The Respiratory Panel breaks away from the current models on the market because it offers a simple one sample, one test process, run on the portable platform, which can be operated by any healthcare professional after basic training. 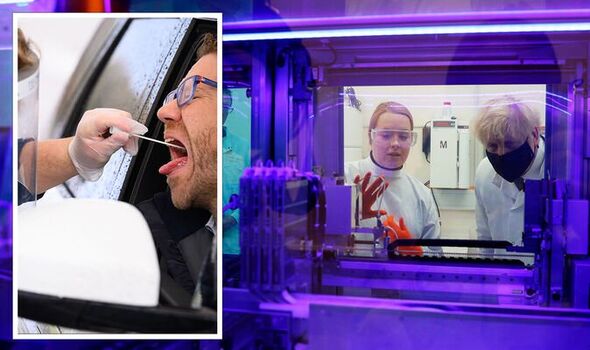 Mr O’Halloran said his team was spurred to action after noticing “really strange” trends in how the diseases were spreading post-pandemic.

He explained: “When you look at the seasonality of flu and RSV you generally get a new flow coming in during the winter.

“So in the winter, you get a big peak of flu and then during the summer it goes away again.

“But what we were seeing, which was really strange, when we were following the surveillance data in the southern hemisphere and around the equator, was we were seeing peaks of flu and RSV happening outside of the usual seasonal time period.

“This made us think that at some point, flu and RSV are going to rebound and we wanted to have a test ready so that we could predict the next epidemic of these diseases as they come back.

“The world has been locked down for almost three years and so [these diseases] have not had the opportunity to be passed around which means we’ve got three years where the population hasn’t been developing immunity to this.

“So, like Covid, a larger portion of the population will be susceptible to these diseases when they do rebound.”

The QuantuMDx team of 125 committed to working late nights and weekends in order to develop the Respiratory Panel in only six months.

More children are likely to be affected by RSV due to a lack of immunity post-lockdown (Image: GETTY)

Testing is essential to monitoring the spread of disease (Image: GETTY)

“It has been an incredible time and a lot of people have put in a lot of hard work,” Mr O’Halloran added.

The device works by breaking open the virus to release the RNA genome and analysing the sequence to identify the disease.

The panel has flown through all the regulatory checks and is ready to ship after successful trials in Newcastle, Barcelona and Cape Town.

Mr O’Halloran said: “All the feedback that we’ve had from international customers says that it’s a high quality product, it’s priced well and the ease of use is fantastic.

“So it’s kind of really raising our profile in terms of the innovation within the UK – it’s truly an exciting time.

“We’ve got this powerhouse generating technology and innovation and we’re getting it to a point where we’re starting to expand throughout the world.”

He noted the Government’s early funding programmes had played a key role in driving the global success of the industry.

The panel can be easily operated after basic training, which the team hopes will propel diagnostics into the future.

Mr O’Halloran continued: “Rather than the doctor sending off samples to a lab and making an imperative diagnosis, you can just enter it into our machine and we’ll be able to tell you what it is.

“I think this is the future of diagnostics as we’re moving away from hospitals and into the communities because you won’t necessarily have a doctor there to help you with the diagnosis.

“Doing a syndrome panel test, you’ll be able to figure out what that it is by doing the test and I think that’s a really new and novel thing and another great thing to plant the flag of Britain for.”

Following their roaring Respiratory Panel success, QuantuMDx says it is focussing on developing an STI Panel and Gastric Panel.

Share
Facebook
Twitter
Pinterest
WhatsApp
Previous articlePaul Hollywood admits he cried over the 'horrendous' backlash when Bake Off moved to Channel 4
Next articleNick Jonas reveals what fatherhood has done to him: 'The weight of everything is much more intense'
RELATED ARTICLES
News