A pregnant woman has tested positive for monkeypox in the United States, a Centers for Disease Control and Prevention (CDC) chief has revealed.

The woman has now given birth to her child, who does not appear to have caught the rash-causing virus from the mother.

Health officials said both were ‘doing well’, but Dr Anthony Fauci warned yesterday that pregnant woman faced a ‘profound risk’ from the virus. A maternity doctor said women in the early stages of pregnancy were most at risk.

The baby has received immune globin, an infusion of antibodies capable of fighting diseases including monkeypox, officials said. It is not clear what treatment the mother received.

Dr John Brooks, chief medical officer in the CDC’s monkeypox response, revealed the case during a webinar with the Infectious Diseases Society of America Saturday.

It is the first infection to be detected in a pregnant woman in the United States, and comes after America recorded its first two infections in children last week. There are currently 3,591 monkeypox infections confirmed in America — the second biggest outbreak in the world behind Spain’s 3,738 cases. 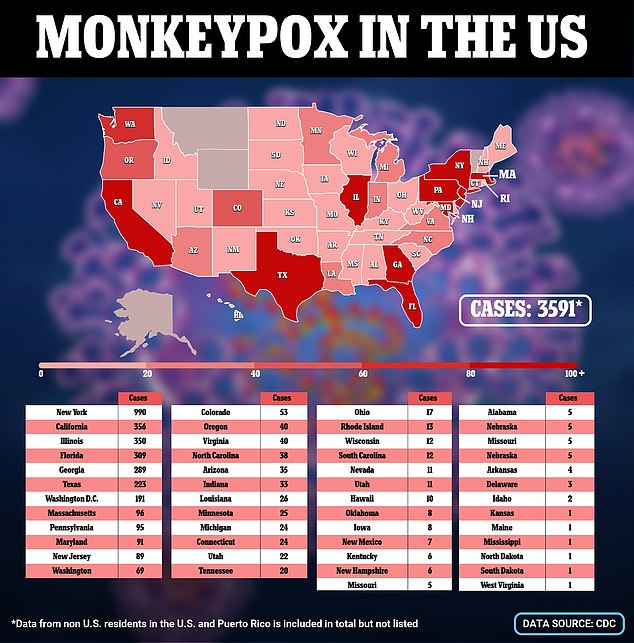 Pictured above is the spread of monkeypox cases across the United States. New York has the most infections at present, followed by California and Illinois 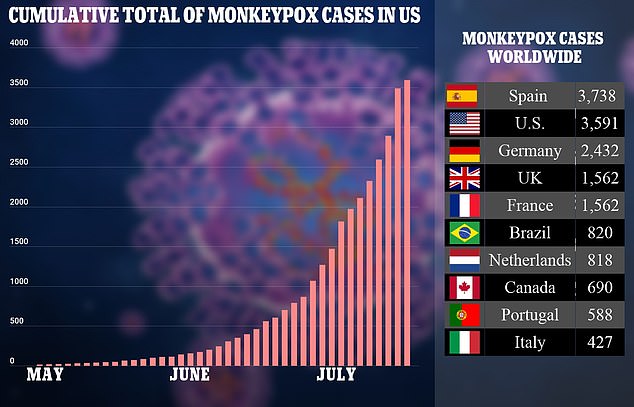 The U.S. currently has the second biggest monkeypox outbreak in the world, behind only Spain which was one of the first countries hit by the disease 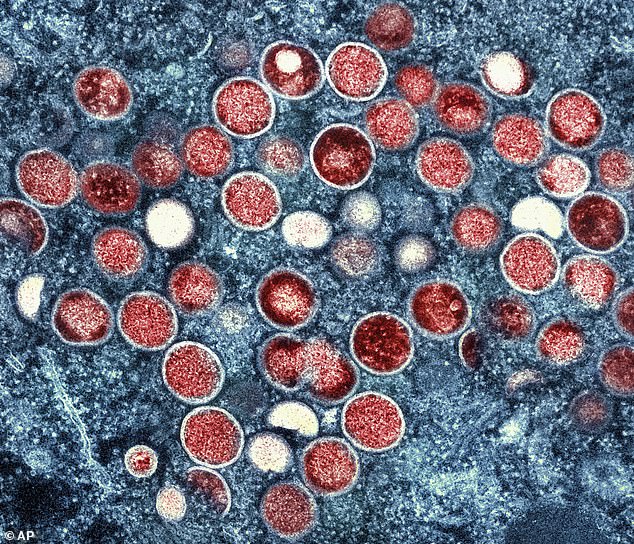 America has detected its first monkeypox case in a pregnant woman in the United States. Pictured above are images of cells infected with monkeypox virus (red dots)

Revealing the case, Brooks said: ‘There has been a case of a pregnant woman who delivered.

‘The neonate received the IG prophylactically (immune globin given to prevent disease). Both mom and baby are doing well.’

Online the CDC says pregnant women are more at risk of monkeypox, with their website reading: ‘People who are pregnant or breastfeeding may be more likely to get seriously ill or die.’

Timeline of monkeypox in the United States

1958: Monkeypox is discovered when an outbreak of pox-like disease occurred in monkeys kept for research.

1970: First human case of the disease is recorded in the Democratic Republic of Congo. It was later detected in a number of other central and western African countries.

2003: America’s former largest monkeypox outbreak occurs. A total of 47 people are infected after having contact with pet prairie dogs that picked up the disease at a farm.

July, 2021: Monkeypox case detected in the U.S. in a citizen who had recently returned from Nigeria.

November, 2021: Monkeypox is detected in another U.S. resident who recently returned from Nigeria.

May, 2022: A man in Massachusetts is diagnosed with monkeypox, becoming the first case in the current outbreak. There are now more than 3,000 cases nationwide.

July, 2022: Two children and a pregnant women test positive for monkeypox, as the disease spreads to other groups. The children were in  California and traveling through Washington D.C., it was not clear where the woman was.

Fauci — the top infectious diseases expert in the U.S. — warned in an interview about yesterday that pregnant women were among those more at risk from monkeypox.

He told NPR: ‘We’ve got to understand the modality of transmission, the manifestations, also the risk for people like children and pregnant women. There’s really a profound risk.

‘Right now, thank goodness, we have a report of only two cases in children, but they’re all at risk populations.’

Dr Daniel Roshan, a maternal-fetal medicine expert at NYU Langone, told DailyMail.com that pregnant women and their babies faced the greatest risk from monkeypox early in pregnancy because the babies organs were still developing, raising the risk of abnormalities.

But by the later stages this danger was reduced because the child is now well-developed.

He told DailyMail.com: ‘If they catch the virus in the first ten days of pregnancy since the baby has just started to develop there is a greater risk of congenital abnormalities.

‘But by the third trimester it is easier for the baby if there is an infection because there is more blood flowing to the baby and the organs are made, so no chance of abnormalities.’

Pregnant women who catch monkeypox can pass it on to their babies in the womb via the placenta. It can also be transmitted once a child is born through close contact — such as cuddles — and there may be a risk of it being passed on via the breastmilk.

Roshan said immune globin would be administered to a pregnant woman who caught monkeypox to help fight off the infection. Inactivated vaccines — such as Jynneous — could also be used.

Asked how the parent became infected, Roshan said this was likely via close contact with an infected patient.

He advised pregnant women to observe ‘normal protocol’ to avoid becoming infected. ‘I would say they should just be careful with the contact,’ he said. ‘Stay away from people with rashes or fever, and follow personal hygiene.’

Pregnant women who catch monkeypox often suffer a fever in the early stages, before rashes begin to break out on their body.

But it is not clear how often these occur, because so few pregnant women have previously been infected.

A 2017 study that tracked four pregnant women with the disease in the Democratic Republic of Congo found two miscarried there babies and there was one fetal death.

Last week the CDC revealed America’s first two cases of monkeypox had been detected in children as the virus spreads to other groups.

One is a toddler from California, while the other is an infant who was travelling through Washington D.C. when the case was detected. Neither had contact with each other.

It is thought both children likely caught the virus from ‘household contacts’, which includes people they live with and visitors to their home.

Dr Rochelle Walensky, the CDC’s director, said the children both had contact with gay or bisexual men — the community where most cases are being detected in the current outbreak.

They have received the antiviral TPOXX, which can help stop an infection in its tracks by interfering with the virus’s maturation.

Until now monkeypox infections have been almost exclusively among gay or bisexual men.

But a top expert has warned that the virus has likely already spread to other groups, but was not being detected among them yet due to a lack of testing.

The World Health Organization warns that pregnant women are more at risk from monkeypox.

Scientific studies suggest that between three and ten percent of children infected with monkeypox die from the disease, depending on the strain they catch.

Energy drinks: A quarter of children in the UK 'consume at least one energy drink on a school-day'