As price of precious metal soars amid a green and digital revolution: Platinum enjoys a jubilee Boom 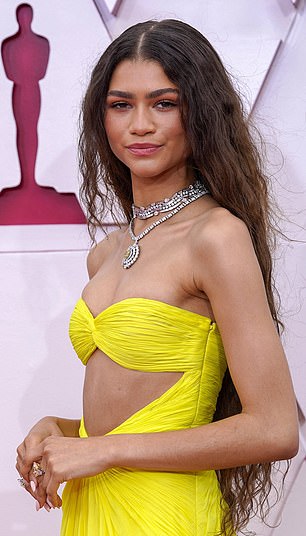 Star quality: US actress Zendaya wearing a platinum necklace at the Oscars in Hollywood

Demand for platinum has soared since the Queen’s Coronation as more and more uses have been discovered for the silver-coloured precious metal.

While most people know of it in jewellery – especially wedding and engagement rings – it is also used in medicine and industry.

It is becoming a crucial material for the green, digital age as cars turn electric and hydrogen power replaces traditional sources of energy.

Demand has also soared – from an estimated 7,000 ounces a year to an estimated 7.2m this year, according to the World Platinum Investment Council (WPIC).

Scarcity is a key part of its value. According to the WPIC, all the platinum ever produced would only cover your ankles in one Olympic-sized swimming pool.

By contrast, all the gold ever produced would fill three similar pools.

Platinum was discovered in South America in the 1730s. Its name is derived from the Spanish ‘platina’, which means ‘little silver’. Most production is now in South Africa, while Russia is also a major exporter.

The invasion of Ukraine has disrupted supply as Western sanctions have targeted Russian resources companies. However, a market surplus means it is unlikely to have an unchecked rally in the short-term. In 19th-century Russia it was used in coins and has long been used in jewellery.

But in the 20th century it became a valued material in medical devices because it is a non-reactive metal, meaning it can be tolerated in the body.

This makes it perfect for pace – makers, cochlear implants and stents. John Meyer, mining analyst at SP Angel, said usage has multiplied ‘many times’ since Queen Elizabeth took the throne in 1952 for environmental reasons, namely the tightening emissions standards on petrol and diesel engines.

Platinum is a key metal in the catalytic converters that filter car emissions.

And it could be an even bigger part of daily life in years to come, as it will be used in electric car fuel cells and in the production of hydrogen power.

This is expected to become an important way to generate green electricity. Investors have a few ways they could add platinum to their portfolio.

The Royal Mint bullion sells platinum bars in several sizes from 1kg to one ounce.

Platinum coins are also on offer individually or in tubes of ten. Mining and exchange-traded fund ( ETF) investments are another option. Meyer says: ‘There are a number of platinum ETF funds where investors can buy into the metal directly.’

He warned investors to look out for links to Russia. ‘Investors might not wish to invest in the Nornickel ETF due to its Russian credentials and operations. 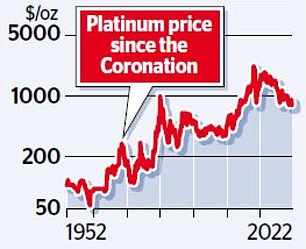 ‘Personally I would invest in the purer equities: Anglo American Platinum and Impala Platinum have US-listed American depository receipts that are traded in London, while Northam Platinum shares are listed in South Africa.’

Another possible platinum player is London-listed Johnson Matthey. Its shares have been under the cosh recently, falling almost 30 per cent in a year amid concerns that commodity prices may have peaked.

The controversial decision to sell its battery materials business, which had been earmarked for future growth, also irked some investors.

Speaking as the 208-year-old company announced a £217m loss following a one-off charge on the battery materials disposal, he said: ‘It is that expertise that has helped remove harmful emissions from vehicles for almost 50 years.’

He added: ‘Our technology has the potential to transform traditionally carbon-intensive sec – tors, such as chemicals, energy and transportation.’ Johnson Matthey is one of only a handful of iconic British companies to remain on the stock market throughout the Queen’s reign.

Robert Downey Jr. beams with happiness as he films new project in the Hamptons