Prince Andrew has ‘no future’ as working royal says Fitzwilliams

Prince Andrew, the Duke of York, has kept a low profile since settling outside of court for his civil sexual assault brought by Virginia Giuffre. He has always denied the allegations brought against him, and the financial settlement is not an admission of guilt.

Daily Express royal correspondent Richard Palmer told Pandora Forsyth, the Royal Round-Up host, Andrew is “delusional” about the public’s reaction and for thinking he can return to royal life.

READ MORE: Prince Andrew spotted with three women out for a ride on the hottest day of the year

He explained: “I’ve spoken to people in the royal circles, better not say more than that, who [are] really tearing their hair out with him.

“[This is] because, you know, they say he is delusional about the public’s reaction to him.” 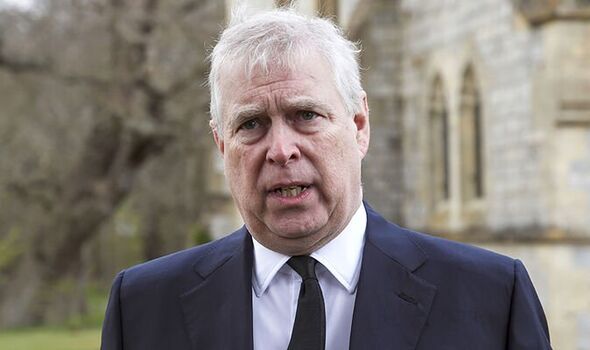 Prince Andrew ‘does not deserve any benefits’ of being a working royal (Image: Getty)

First, Express.co.uk asked: “Should Prince Andrew be kicked out of Windsor Castle?”

In total, 13,681 answered with the overall response being “yes” he should be kicked out of Windsor Castle, gaining 85 percent (11,673 people) of the vote.

Royal expert Ingrid Seward said that once Prince Charles took the throne, she would be “very surprised” if Andrew was allowed to stay in Windsor.

She said: “He will be financially secure but I will be very surprised if he keeps the Royal Lodge.”

Prince Andrew has been living at the Royal Lodge on the grounds of Windsor Castle (Image: Getty)

Andrew and his ex-wife Sarah Ferguson, also known as Fergie, have shared the £30million Royal Lodge on the grounds of Windsor Castle since 2004.

He has taken refuge in the grounds and was seen wearing a fleece and jacket bearing the Grenadier Guards’ royal cypher while horse riding, as reported by The Sun.

Next, Express.co.uk asked: “Should Prince Andrew continue to wear military gear despite being stripped of titles?”

Some 13,670 people responded to this question with the overwhelming majority, 91 percent (12,537 people), answering “no”, Andrew should not continue to wear military attire.

“He has been asked to leave and hand over his title. He is continuing to tarnish the regiment.

“He didn’t serve in the Grenadier Guards, it was only ceremonial so he has no right to continue to wear the royal cypher. But no one can officially tell him to stop wearing it.”

Overall, 12,689 people cast their votes on this question, and the dominant response, winning by a landslide of 94 percent (12,846 people), was “no”, Andrew should not continue to push to return to public royal life.

Camilla feared being ‘booed’ on wedding day to Charles following intense public scrutiny [INSIGHT]
Doesn’t impact 98.6% of his life! Harry skewered for ‘fighting tooth and nail’ in UK row [LATEST]
Prince Harry told to ‘get on with life’ and to ‘spike’ memoir ‘More damage to family’ bond [VIDEO]

Hundreds of comments were left below the accompanying article as readers took part in a discussion on Andrew’s future.

One reader, username Debby Fry said: “Andrew’s past life has caught up to him in spades. He should not be allowed to live like a working royal when he is no longer one.”

Username J one said: “He will be forever linked with Epstein Best thing Andrew can do is fade away.”

Another reader, username Greeneyz, said: “He may be royal by birth but he is no longer a working royal and does not deserve any of the benefits that go with being a working royal.”

However, some thought he should be allowed to stay at Windsor.

Username Tgs5995 said: “Prince Andrew should be able to stay in his home. He’s never been proven guilty so all this fuss about him should stop.”

And username Elite said: “Regardless of what he has or hasn’t done, where he lives has nothing to do with the public.

“It is the Queen’s choice to allow her son to live there and if that is what the Queen wants then that is up to her. He is her son above everything else.”