The only daughter of the Duke and Duchess of Cambridge melted hearts as she joined her parents in Birmingham on Tuesday to watch some of the sporting events taking place during the fifth day of the Commonwealth Games. While at the Sandwell Aquatics Centre, Princess Charlotte was spotted widening her mouth with surprise, clapping, joking with her parents and, at times, looking unimpressed.

She later took part in activities during a meeting with members of SportsAid, a charity supporting young athletes and their families whose patron is Kate.

On top of her adorable and varied reactions to the athletes’ performances, some believe the seven-year-old appeared to mimic how her parents were sitting down, cheering on swimmers or behaving with others.

Expert Judi James agreed the young royal showcased a body language very similar to the one used by Kate and Prince William.

The body language commentator stressed how “all body language is learnt via conscious and sub-conscious mimicry and it is natural for small children to adopt gestures and facial expressions that their parents use.” 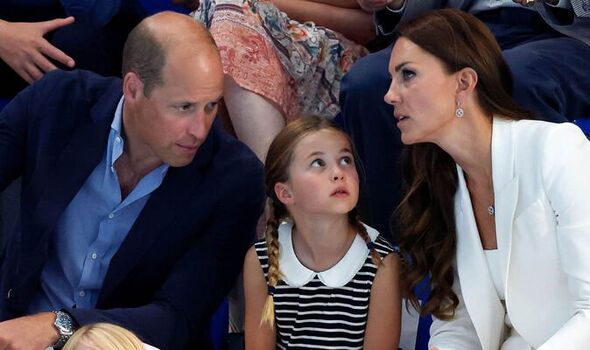 Princess Charlotte was at the Commonwealth Games on Tuesday (Image: GETTY)

Speaking about Charlotte, though, she also told Express.co.uk: “Charlotte’s mimicry of both Kate and William signals shows her admiration of and closeness to both of them.

“In previous outings we have tended to see Kate together with Charlotte while William and George stick close but with her brothers out of the way Charlotte’s mirroring of her parents looks equal, showing intensely close bonds with both of them.”

Analysing the behaviour shown by the fourth-in-line to the throne on August 2, Ms James also said some of the body language witnessed recently may stay with the young member of the Firm for the rest of her life.

She explained: “As we grow older we often acquire different traits that might be learned from our peers or other role models but many of the traits that Charlotte is showing here might probably be with her for her lifetime, like the style of clapping she uses with the fingers curled as they part or the way she and her parents all lean forward with their hands in a semi-steeple when they are engrossed in something.”

Princess Charlotte appears to mimic Kate as she claps her hands (Image: GETTY)

The young princess is on a “life-long behavioural induction course”, the expert also said, hinting at her future in the public eye.

Ms James said: “Charlotte shows here that she is picking up two sets of body language skills though: when the family are relaxed and enjoying the action there is the subliminal mimicry that defines them as a close, like-minded group.

“These will be gestures and facial expressions that are now embedded for Charlotte, meaning she will do them naturally without thinking about it.

“However, as a young royal, Charlotte is also on a life-long behavioural induction course and we can also see her acquiring many more consciously trained actions.

Princess Charlotte is William and Kate’s only daughter (Image: GETTY)

“She is seen moving forward socially to greet people, using eye contact and copying her mother’s amazing social smile in the meetings and when there is an official photograph to pose for she carefully adopts the same, more formal pose her parents are using.”

Charlotte, the expert added, had already shown to be excelling at these formal traits on June 5, when standing on the balcony of Buckingham Palace she was spotted “nudging” Prince George seemingly to correct his posture while the national anthem was being played.

However, Ms James said, Charlotte isn’t simply mimicking her parents when in public.

Rather, she also displayed a body language which appeared to have the effect of “leading” and “influencing” her parents at times instead of simply copying them.

This, Ms James said, suggests Charlotte has a good level of confidence when in public.

She explained: “She led her mother into their seats and she also seems to be leading the way when it comes to relaxing and having fun.

“Charlotte’s facial expressions that include tongue-poking, wide rounded eyes and all the more spontaneous, fun traits she showed as she watched the sporting action are not body language rituals that we tend to see from the much more reserved William and Kate in public.

“Even her emphatic ‘thumbs up’ gets a jovial ‘shocked’ reaction from her dad, making it her own ritual rather than one copied from him.

Princess Charlotte with Kate and William posing for a picture (Image: GETTY)

“Overall though we can see that they led to some gently mimicry from both Kate and William, with Kate in particular widening her own eyes and later opening her mouth in a way that is similar to her daughter’s rituals of enjoyment.”

Much like her elder brother Prince George, Charlotte is being slowly introduced to royal duties.

Yesterday marked an important milestone for the princess, as it was her first-ever public appearance made without the presence of either of her siblings.