Prince George joined Kate and Prince William at Twickenham Stadium on Saturday, when the England and Wales rugby team clashed in a Six Nations championship match. Prior to the match, the three Cambridges met Jeff Blackett, president of the Rugby Football Union (RFU), of which the Duchess became patron earlier this month, and Gerald Davies, president of the Wales National Rugby Union (WRU), whose royal patron is the Duke.

The Duke, Duchess and their firstborn also met representatives of the RFU’s community and grassroots game, volunteers and RFU council members.

During the meeting, Prince George was encouraged by his doting mother to tell the group about his own experience with rugby, which he has started to play at Thomas’s Battersea school.

Proud mum Kate said: “He has all the kit.”

George then revealed he has just started to learn how to tackle – before sharing a joke with his mum. 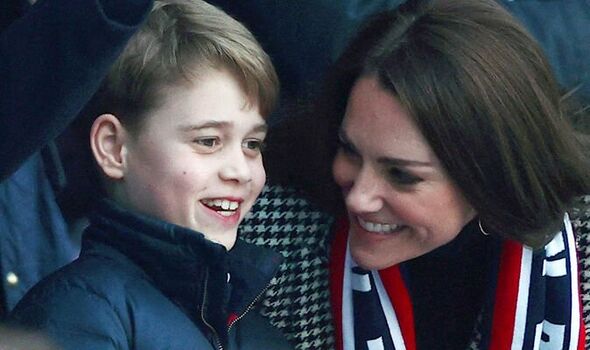 Prince George joked with his mother during a recent public appearance (Image: GETTY)

The third-in-line to the throne said: “But I haven’t tackled you yet!”

Kate replied, laughing: “Yes you have!”

This engagement could be seen as an attempt by the Duke and Duchess to very slowly ease in their son Prince George into the world of royal duties.

After the meeting, the three royals headed on the stalls to watch the match, with Prince William and Kate wearing scarves each representing their own team.

At the beginning of the match, won by England, little Prince George proudly sang the national anthem – while looking every now and then at his parents.

The child also sent royal fans into a frenzy by sticking his tongue out during a cheerful exchange with Kate and William.

Prince George isn’t the only member of the Cambridge family to enjoy playing rugby.

In early February, on the day her appointment as patron of the RFU and Rugby Football League (RFL) was announced, Kate visited Twickenham for a special training session with the male and female England squads.

Prince George was spotted sticking his tongue out during the match (Image: GETTY)

Prince William has been the patron of Wales rugby since 2016 (Image: GETTY)

Discussing her family’s love for the sport, the Duchess said: “Now that there is a move towards co-ed sport, so it’s not just girls playing netball, but other sports like rugby, which is great.”

“We’re worrying about when he gets older, he’ll be in the middle of everything.”

Kate took over the patronages of the RFU and RFL after Prince Harry had to relinquish them in February last year as a consequence of his decision to step down as senior royal.

Prince George is third-in-line to the throne (Image: EXPRESS)

These have so far been the only two patronages formerly held by the Duke and Duchess of Sussex to have been redistributed.

Kate and Prince William’s presence at Twickenham comes as they are preparing to embark in their first joint tour abroad in two years.

As announced by the Royal Household last week, the Cambridges are to visit Belize, Jamaica and The Bahamas from March 19 to 26.

This visit, during which Kate and William have stressed they want to meet as many locals as possible, is just one of the several tours announced ahead of the June celebrations for the Platinum Jubilee.

As the Cambridges’ tour is underway, from March 23 to 25, Prince Charles and Camilla, Duchess of Cornwall, will visit Ireland.

Moreover, Sophie, Countess of Wessex, and Prince Edward will visit Antigua and Barbuda, Grenada, St Lucia, and St Vincent and the Grenadines from March 22 to 28.

Finally, Princess Anne will lead a solo tour of Papua New Guinea from April 11 to 13.

But, on that same month, the Princess Royal is also to travel to Australia to attend, as a guest of honour, the upcoming Sydney Royal Easter Show.