Prince George and Charlotte decided to attend funeral day before

Prince George had a cheeky comeback for his schoolmates warning them to “watch out” as his dad, Prince William is the heir to the British throne, a royal expert has claimed. In her book “The New Royals,” Katie Nicholl suggested the young boy has a good understanding o the monarchy and his family’s role. The children of Prince William and Kate, the Princess of Wales are reportedly raised with a “sense of duty”.

Vanity Fair’s royal correspondent and author said: “They are raising their children, particularly Prince George, with an awareness of who he is and the role he will inherit, but they are keen not to weigh them down with a sense of duty.

“George understands he will one day be king and as a little boy sparred with friends at school, outdoing his peers with the killer line: ‘My dad will be king so you better watch out’.”

The future King, Prince George, and his sister, Princess Charlotte, remained impeccably behaved through a long and solemn day as they bid farewell to their beloved “Gan Gan”.

The royal siblings, great-grandchildren of the Queen, were among 2,000 guests at her state funeral and were the youngest members of the royal family to follow the Queen’s coffin through Westminster Abbey. 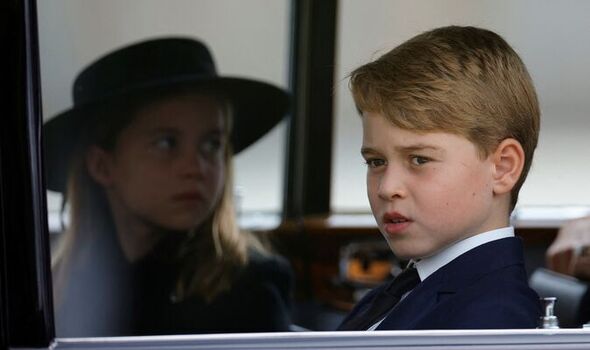 Prince George is raised with awareness of his role, an expert claimed (Image: Getty)

They also attended the committal service in St George’s Chapel at Windsor Castle later in the afternoon.

At Westminster Abbey, George, nine, and Princess Charlotte, seven, walked behind the Queen’s coffin as part of a solemn procession before hundreds of guests in the gothic church and watched from afar by a huge international TV audience.

As the young royals followed their great grandmother’s coffin, flanked by their parents, the Prince and Princess of Wales, Charlotte held her hands clasped in front of her, while George had his arms by his side.

The foursome walked a little behind the King, Charles, and Camilla, Queen Consort, and ahead of the Duke and Duchess of Sussex.

The young royals had arrived earlier in a car with Camilla and their mother, Kate.

George was dressed in a dark navy suit and black tie, while Charlotte wore a black coat dress with pleats at the back and a small silver horseshoe pinned on the front, black tights and a hat with a ribbon tied at the back.

Ahead of the service, the Princess of Wales could be seen holding Charlotte’s hand, and giving her a reassuring touch on the shoulder.

Throughout the service, the children could be seen studying their order of service at various points, with Charlotte looking around from under the brim of her hat while the mourners sang The Lord’s My Shepherd.

And her brother George was seen singing The Day Thou Gavest, Lord, Is Ended as he stood between his parents.

At one point, Kate could be seen comforting her son with a hand on his knee.

At the end of the service, George followed closely behind his father, while Kate put a reassuring hand on the back of her daughter, as the family got up from their seats and stood behind the coffin.

As they filed slowly out of the Abbey both children looked down at times.

Prince George with his family at the funeral (Image: PA)

They later stood with their mother Kate, Meghan, Camilla and the Countess of Wessex, watching as the Queen’s coffin began its final journey from Westminster.

When the coffin reached Wellington Arch, it was transferred to the state hearse to be driven to Windsor, with senior royals watching at the side.

Charlotte clasped her mother’s hand and chatted briefly with her elder brother, gesturing at the coffin as it was carefully lifted off the gun carriage metres away.

At the committal service in Windsor, TV cameras gave only a few glances of the siblings, who remained impeccably behaved despite their young age.

Charlotte was seen exchanging a few words with the Dean of Windsor as the family left the chapel and was ushered to a waiting car.

The prince and princess’ four-year-old brother, Prince Louis, was not present.

Share
Facebook
Twitter
Pinterest
WhatsApp
Previous articleLucy Boynton teams a denim jacket with a polka dot skirt as she films scenes for romantic comedy
Next articleSarah Murdoch, 50, wears a pair of socks with slides as she steps out in tight activewear
RELATED ARTICLES
News