Prince Harry warned: Inflict more pain and it's 'point of no return'

The King hopes they will eventually “run out of ammunition” and, having said their piece, there will be a chance to rebuild the relationship. A royal source told the Daily Express: “The King is a father who loves his son and like any parent is frustrated and worried that his two children have such a difficult relationship.

He is determined not to cut Harry off and believes there may still be a way back for the Sussexes.

“The Royal Family is dreading this [Netflix] documentary but hope that once Harry and Meghan have said their piece, they can draw a line under it and move on.”

A Palace source added: “It is a very distressing time all round. We certainly hope grievances can be resolved and who knows where that might leave us?”

Royal author Phil Dampier was not ­surprised at Charles’ forgiving attitude but believes there is a “red line”.

Mr Dampier said: “I am sure it is right that Charles will go to great lengths to maintain a relationship with Harry but there is a limit. Harry’s book, Spare – which is due out in January – is expected to be 400 pages of dynamite.

“King Charles would pretty much forgive Harry anything – except dragging Camilla through the mud. If Harry’s account of his parents’ divorce is too critical of Camilla, or places too much blame at Charles’s door while painting his mother as a saint, that will be the point of no return.

“At that point what sanctions are on offer? What choice do they have but to say, ‘OK, you’ve crossed a line here and there is no way back. It’s time to go your own way, but not as the Duke and Duchess of Sussex’.” 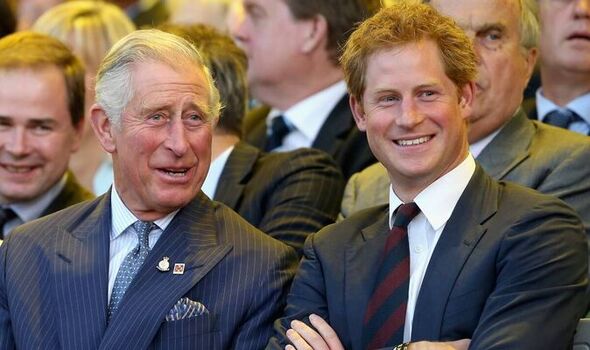 Mr Dampier added that Charles was ­devastated at the loss of Lady Susan Hussey from the Royal Household despite her questioning of British domestic abuse campaigner Ngozi Fulani about “where she was from”.

And the release of Harry and Meghan’s Netflix trailer as William and Kate’s crucial US tour began added to the King’s anguish.

Mr Dampier said: “Charles has known Lady Susan Hussey for the whole of his adult life. She was a precious friend of his mother and he would have been deeply unhappy to lose her. He would have found it almost impossible to sack her.

“She was thrown under the bus, but the impetus for her resignation very much came from Lady Susan herself which made it ­easier for him.”

Yesterday, the Sussexes’ friend and ­biographer Omid Scobie took to Twitter to criticise the King, saying: “If King Charles truly wants to show leadership and modernise the monarchy, then acknowledging the institutional racism within it is the only way forward.”

He was also dismissive of Lady Susan, claiming there was an attempt to turn her into “the victim” after her comments.

He wrote: “I see we have entered the ­predictable turn-the-victim-into-the-villain phase of the story.

“The gymnastics and lying some people are doing to excuse the racism of a woman they haven’t met is wild. No wonder so many who experience racism or bigotry keep it to themselves. Shameful.”

Mr Dampier believes Charles is “deeply concerned” but “not in despair” at the race row and tension between his children.

He said: “The monarchy has been through much worse. This is nothing compared to the 1990s, simply not on the same scale.

“They survived the Annus Horribilis, the Windsor Castle fire, the death of Diana and they will survive this too. Charles is popular with people and William and Kate are popular too.

“I don’t see the end of the monarchy. On the contrary, I think it will thrive. It is significant that a lot of countries like Australia, New Zealand, and Jamaica aren’t immediately getting rid of the monarchy following the Queen’s death. That’s quite telling, they actually want to give Charles a chance.”

Royal author Christopher Wilson agreed the monarchy would survive but believes Harry and Meghan were “disgracing themselves on a daily basis”.

He compared their behavior to the abdication of King Edward VIII over his relationship with divorcee Wallis Simpson in 1936.

Mr Wilson said: “To some long-term observers, this is the worst crisis to hit the royals since the abdication of King Edward VIII, which tore the family apart and threatened to capsize the monarchy.

“There’s no question that Charles, witness to many crises during his decades as heir to the throne, has the experience to tough it out. What must hurt him, as a father, is to watch his son take a wrecking ball to the institution that once nurtured him.”

Harry and Meghan’s Netflix documentary was launched with an explosive one-minute teaser ahead of airing next Thursday.

No other members of the Royal Family apart from the Sussexes were given the chance to watch it before it goes out.

The trailer included dozens of private pictures from their family album and a voice-over from Harry saying: “No one sees what’s happening behind closed doors.”

A black-and-white picture of his wife on an armchair, apparently crying, appears before the film cuts away to an unflattering picture of William and Kate at the 2019 Commonwealth Service in London.

Meghan is then shown talking to an interviewer off-screen and says: “When the stakes are this high, doesn’t it make more sense to hear our story from us?”

The clip has caused much angry reaction and incensed Isle of Wight MP Bob Seely.

Mr Seely, who served in the Armed Forces in Afghanistan and Iraq, called Harry and Meghan a “dreadful couple” who should be stripped of their titles.

“Why on earth we allow him to keep his titles if he hates this country and hates the monarchy. If I had time I’d be bringing in a private members’ bill to say if you want
to hate the monarchy, you’re Mr Windsor – jog on, grow up.”

Student, 23, killed after being hit by police car but cops refuse to put officer on leave