Prince Harry warned he will ‘hit a wall’ by Enrique Rosas

Richard Hillgrove delivered his forthright assessment at the start of a year which will see the Duke of Sussex publish his potentially explosive memoir. However, while the book creates a potential problem for Queen Elizabeth II, 95, as she prepares to celebrate her Platinum Jubilee, Mr Hillgrove, a PR consultant who has worked with Charles Saatchi, Julian Assange, Amber Heard, Rose McGowan, and Dame Vivienne Westwood, claims Harry is beset with difficulties of his own – and is struggling to settle in the States.

However, in 2020, the pair moved to Canada after sensationally stepping back from their roles as frontline Royals.

They subsequently moved to California, where they now live with their son Archie, two, and baby daughter Lilibet. 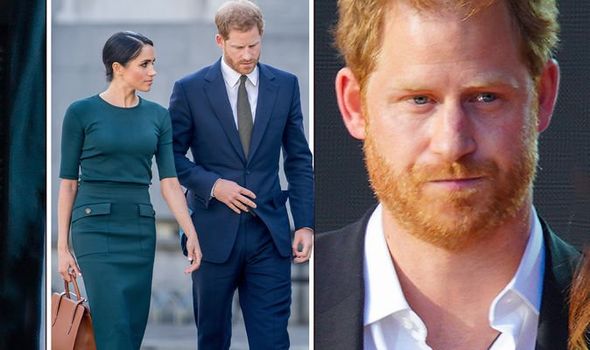 Prince Harry, living in the US with wife Meghan Markle, “does not look happy”, said Mr Hillgrove (Image: GETTY)

Mr Hillgrove told Express.co.uk: “Unfortunately, Harry’s just like a rabbit in the headlights and caught up in it.

“He doesn’t look like a happy person at all. He looks jaded.”

Referring to Harry’s interview with Tom Bradby in South Africa in 2019, he said: “The funny thing is, what he said in the ITV interview was that he’s withdrawing from Royal life, because he doesn’t want to be in the limelight.

“But then he’s morphed into this creation in America, where’s he’s on the top of a bus, singing with James Corden.

“It’s a million miles from what he professed that he wanted – he said he wanted a private life.”

He added: “He thinks this system in America has got his best interests and everyone at home is has got it in for him.”

Prince Harry is a “rabbit in the headlights”, claimed Mr Hillgrove (Image: GETTY)

Mr Hillgrove added: “The thing is he has gone so far now.

“There seems to be a lot of envy and jealousy, of being the brother that’s not in first line at all that type of stuff.

“He’s got a sense of importance and power, but when the puppet masters in America that are managing the Harry and Meghan show realise they can’t get much more out of them they will be off, and he’ll be on the sidelines. I feel really sorry for Harry.”

Harry and Meghan accused an unnamed royal of discussing Archie’s skin colour before he was born and claimed the Royal Family collectively failed to help Meghan when she was suicidal.

Buckingham Palace is bracing itself for fresh revelations, as Harry prepares to publish his book later this year.

The Prince has said his book will be written “not as the prince I was born but as the man, I have become” and as an “accurate and wholly truthful” account of his life.

It will cover his time in the public eye from childhood to the present day.

There are fears Harry will delve further into his strained relationship with his father the Prince of Wales, write about his rift with brother Prince William, or possibly even name the royal accused of making allegedly racist remarks.

Publisher, Penguin Random House, has yet to confirm the exact release date, but said it is “tentatively scheduled for late 2022”.

Express.co.uk has approached Prince Harry via Archewell for comment.