Last year, it was announced that Prince Harry, 37, was penning an “intimate and heartfelt memoir” about his life, which he touts as “accurate and wholly truthful”. Published by Penguin Random House, it will be the “definitive account” of the Duke’s “experiences, adventures, losses, and life lessons”.

Speaking about the book in 2021, the prince said: “I’ve worn many hats over the years, both literally and figuratively, and my hope is that in telling my story — the highs and lows, the mistakes, the lessons learnt — I can help show that no matter where we come from, we have more in common than we think.”

He added: “I’m deeply grateful for the opportunity to share what I’ve learned over the course of my life so far and excited for people to read a firsthand account of my life that’s accurate and wholly truthful.”

But its publication date, although floated as late 2022, has never been set in stone.

And spokespeople for the publisher and the prince have not confirmed whether the personal reveal-all will still appear this year. 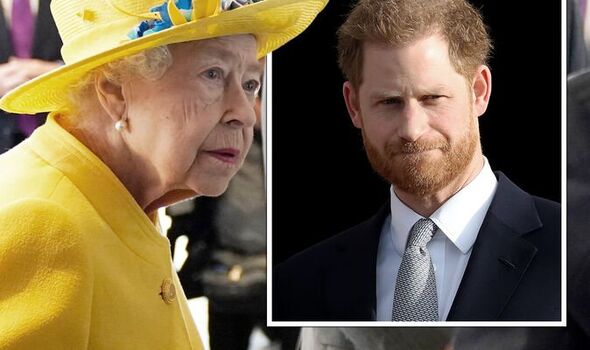 The release date of Prince Harry’s memoirs has not been published (Image: Getty)

The Duke and Duchess of Sussex, 40, stepped back from Royal Family life in March 2020 (Image: Getty)

But there may be a reason for this, royal expert Roya Nikkhah has suggested, and it could be linked to the Duke and Duchess of Sussex’s planned return to UK soil next month.

Writing in The Times, she said a delayed publication date would “avoid overshadowing” the events of the Queen’s Platinum Jubilee, but would also allow Harry to shoehorn his account of the Sussexes’ return into the book.

She said it would “provide Harry an opportunity to give his account of attending next month’s celebrations with Meghan and their children, the first time the Sussexes will have been reunited with the Royal Family for more than two years.”

The Duke and Duchess of Sussex, 40, stepped back from Royal Family life in March 2020, relocating to Meghan’s home state of California.

READ MORE: Queen ‘starting to get fed up’ with key aspect of royal visits

They will bring their two children, Archie and Lilibet, when they return to the UK (Image: Alexi Lubomirski/Duke and Duchess of Sussex)

Since their departure, they have scarcely returned to the UK but briefly stopped over to visit the Queen in April before heading on to the Hague for the Invictus Games.

A spokesperson for the Duke and Duchess confirmed the pair were “excited and honoured” to make the trip back to London for the Jubilee celebrations, bringing with them their two children, Archie and Lilibet.

However, the Duke and Duchess of Sussex will not appear alongside remaining Royal Family members during the Queen’s Trooping the Colour parade, Buckingham Palace said.

Only working members of the Royal Family, among which the Sussexes nor Prince Andrew are counted, will stand out on the Palace’s balcony.

They briefly stopped over to visit the Queen in April before heading on to the Hague (Image: Getty)

A spokesperson outlined: “After careful consideration, the Queen has decided this year’s traditional Trooping the Colour balcony appearance on Thursday June 2 will be limited to Her Majesty and those members of the Royal Family who are currently undertaking official public duties on behalf of the Queen.”

But surrounding the couple’s return for the historic Jubilee is a fair amount of trepidation over the release of Prince Harry’s memoirs from within the Royal Family ranks.

Royal author Ian Lloyd told Express.co.uk last month that the Royal Family will be “very wary” at the Jubilee of the book’s release.

When the book was first announced, a source close to Prince Harry’s father, the Prince of Wales, said they were “surprised” by the news.

A palace aide told the Telegraph: “We are more likely to answer questions next year when this memoir is due to be published.”

Ms Nikkhah wrote: “A delayed publication date would probably be a relief to the royal family and courtiers, with some fearing they will come under fire in the book following the Sussexes’ soul-baring interview with Oprah Winfrey.”

The couple’s sit-down interview with the US chat show host in March 2021 reverberated through the royal households.

A Palace statement following the airing of the interview read: “The whole family is saddened to learn the full extent of how challenging the last few years have been for Harry and Meghan.

“The issues raised, particularly that of race, are concerning.

“While some recollections may vary, they are taken very seriously and will be addressed by the family privately.”