In a set of polls that ran from 10am on Thursday, March 24, to 11am on Friday, March 25, Express.co.uk asked readers’ opinions on whether Prince William should have apologised to Jamaica for the UK’s role in the slave trade.

First, Express.co.uk asked: “Should William have apologised to Jamaica?”  A total of 7,746 people answered this question.

The overwhelming majority – 94 percent – (7,279 people) answered “No”, Prince William does not need to apologise.

Then, Express.co.uk asked: “Should the UK pay for slave history?”

For this question, the majority of the 7,628 voters said “No”, the UK should not pay for slave history with 95 percent of voters (7,259 people) choosing this option.

Readers shared their views on the issue with hundreds of comments left below the accompanying article.

Username MissChievousMiss said: “I don’t want anyone apologising on behalf of people who had nothing to do with it.”

And username Elite wrote: “No member of the Royal Family or any British person should apologise for the actions of our ancestors.”

Many shared such sentiment that Prince William did not need to apologise as the actions were long in the past. 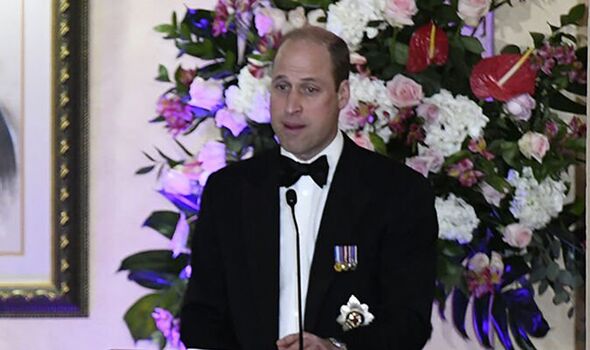 Username WHAT? wrote: “No, not you, nor I, nor William are responsible for anything our long-dead ancestors did and we are not responsible or liable for their actions.

“Slavery has existed around the world for thousands of years, and still does. The idea of countries involved up to 2,000 years ago paying reparations is farcical.”

Others thought that while reparations were necessary it was not something that can be apologised for today.

Username gillmags wrote: “I share William’s sentiment, those were very bleak times. I wish with all my heart as all decent people would that these things had not happened but I can’t say sorry for something over which I had no control, its history.”

And username Dr Evil said: “Of course William should not apologise. Slavery was perfectly legal back then. When things changed we freed all the slaves. That should be the end of it. We cannot change history.”

During the Duke and Duchess of Cambridge’s Caribbean tour, William spoke to dignitaries at a dinner hosted by Jamaican Governor-General, Sir Patrick Allen.

His speech stopped short of an apology but he said: “I want to express my profound sorrow. Slavery was abhorrent. And it should never have happened.

“While the pains run deep, Jamaica continues to forge its future with determination, courage and fortitude.

“The strength and shared sense of purpose of the Jamaican people, represented in your flag and motto, celebrates an invincible spirit.”

His comments echoed those made by his father, Prince Charles, in Barbados last year when it became a republic.

DON’T MISS:
Look out Kate and William! Charles and Camilla show off their dance moves on Ireland visit [VIDEO]
Queen urged to strip Prince Harry of major role as new fears emerge [UPDATE]
Fergie branded ‘disaster of a royal’ as Prince Andrew’s ex-wife to be left out of Crown [LATEST]

Britain’s involvement in the transatlantic slave trade began in 1663 with royal approval.

In less than 150 years, Britain transported millions of enslaved Africans to the Americas.

It was here where men, women and children were forced to work on plantations, and brutally denied their basic rights.

Towards the end of the 18th century, calls for abolitionism started to gain traction.

Finally, in 1807, legislation to end Britain’s involvement in the trade received royal assent, making it illegal for any British ship or British subject to trade in enslaved people.