Clinics are cashing in on the UK’s hay fever drug shortage by promoting a jab that was withdrawn by the NHS due to safety concerns.

MailOnline found practices advertising Kenalog steroid injections on Instagram for between £35 and £100.

The powerful drug works by suppressing the immune system and dampening the allergic reaction hay fever sufferers experience. Its effects can last months.

But it was phased out of NHS use a decade ago after the safety watchdog decided the risks outweighed the benefits.

It was found to leave people vulnerable to other infections like chickenpox, shingles or the flu, and potentially cause irregular heartbeats, depression and high blood pressure.

While people can still legally get Kenalog privately, clinics are banned from promoting prescription-only medications under UK advertising rules.

Four clinics have already been sanctioned by the Advertising Standards Authority (ASA) for advertising the injection online.

It comes amid forecasts of high pollen levels across Britain this week and after a pollen bomb last weekend. Millions with bad hay fever, as well as asthma and other lung issues, are being urged to take precautions.

At the same time, stocks of some popular hay fever tablets are running low across the UK due to an ingredient shortage. 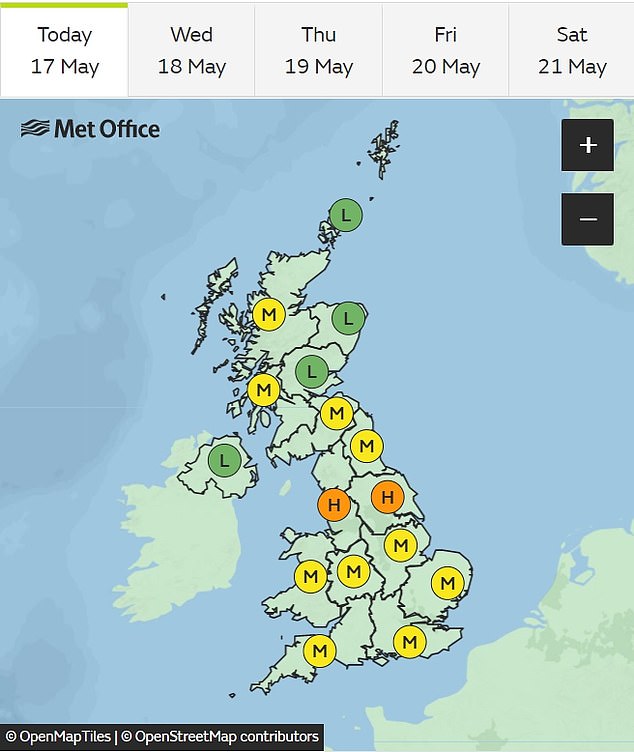 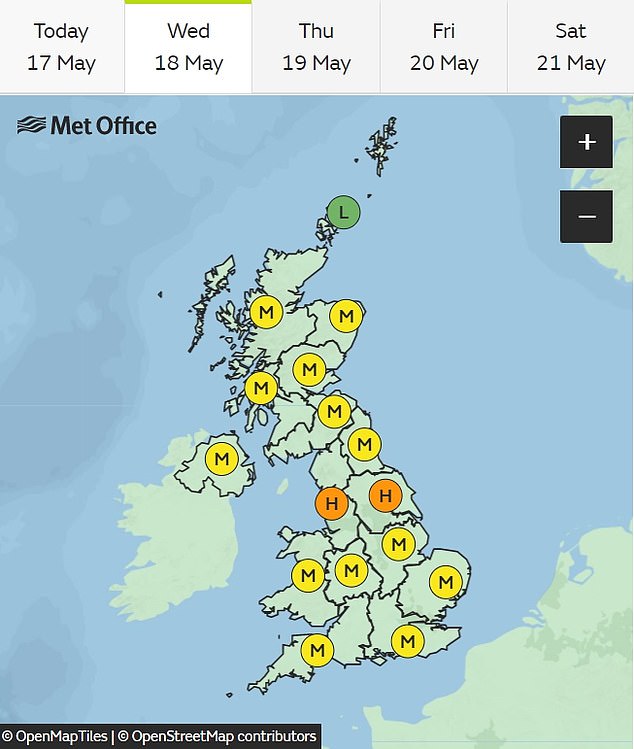 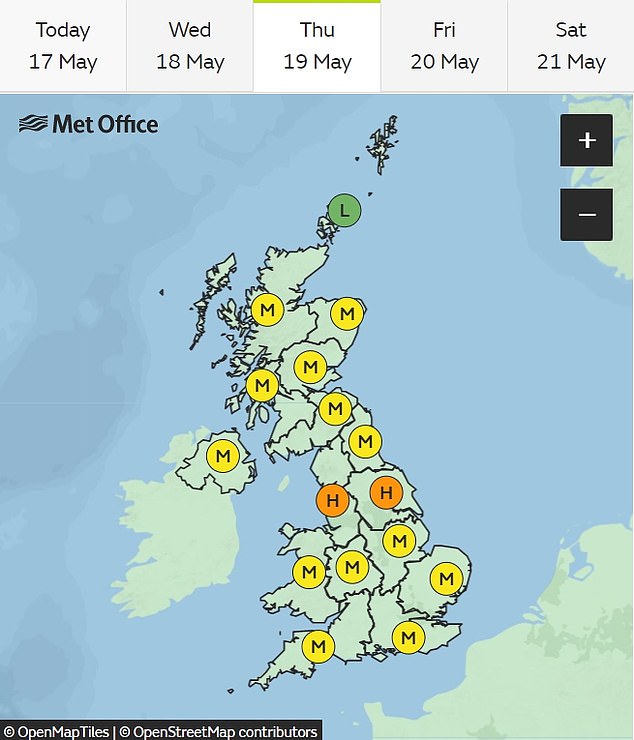 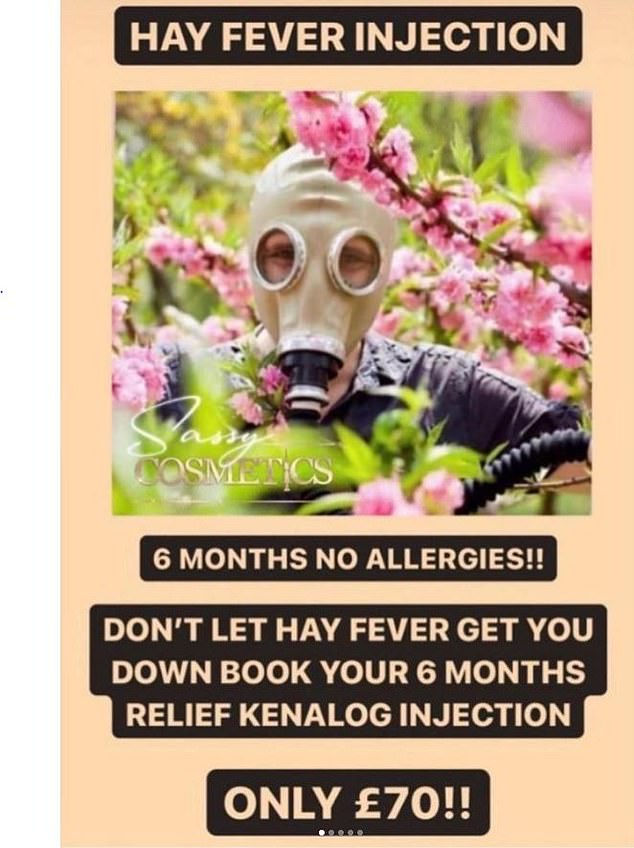 An Instagram story uploaded by one clinic urges its 6,500 followers ‘don’t let hay fever get you down, book your six months (sic) relief’ 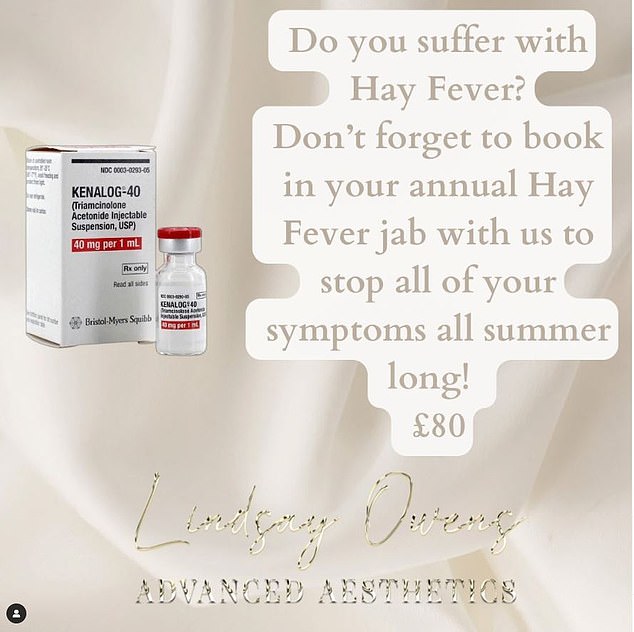 Lindsay Owens Aesthetics, which has practices in Bexleyheath and Rochford, promoted the drug to its 23,000 followers on Instagram.

WHAT IS KENALOG AND WHY WAS IT PULLED FROM NHS?

Kenalog is a steroid injection used to treat hay fever.

The jab, usually administered to the buttocks, contains triamcinolone — a corticosteroid hormone.

Rather than curing hay fever, it is a blunt tool that works by suppressing the body’s immune response, so that symptoms are alleviated.

One injection may be enough for hay fever sufferers to get through the year but others may need a booster dose two weeks after the first.

As well as hay fever, the drug is used to treat arthritis, gout and skin diseases.

Why did the NHS stop offering Kenalog?

The jabs were routinely given to severe hay fever sufferers until around a decade ago.

But guidelines found their side effect risk was too high, compared to the benefits of the jab.

It was found to leave people vulnerable to other infections like chicken pox, shingles or the flu, and cause serious side effects like irregular heartbeats, depression and high blood pressure.

The Met Office predicts at least medium pollen levels across every area of England and Wales today, with highs in the North West and Yorkshire and Humber.

These levels are set to continue in the majority of the country this week, with most of Scotland and Northern Ireland also predicted to reach medium pollen levels by tomorrow.

Around one in four people in the UK — equating to 16million people — suffer from hay fever.

MailOnline found several clinics — most of which specialised in cosmetic treatments — promoting triamcinolone, sold under the brand name Kenalog.

Sassy Cosmetics Essex offered the injection for the discounted price of £70 on its Instagram page, down from £100.

It references the high pollen levels expected in the coming days. ‘With it being predicted we will have the highest pollen count in 70 years, for many it means a season of suffering,’ it says.

‘Through a single injection into the buttocks we can relieve symptoms for several months,’ the post adds.

The account has almost 6,500 followers, many of whom are young women.

The post even claims the NHS stopped offering Kenalog due to ‘budget cuts’ and that delivering the injections was taking too much of GP’s time.

Lindsay Owens Aesthetics, which has practices in Bexleyheath and Rochford, used a syringe emoji to promote the drug to its 23,000 followers on Instagram.

‘Fever Season Is Upon Us! Don’t Forget To Book Your Annual Hay Fever Injection With Us To Stop Symptoms All Summer,’ it reads.

Glow Beauty & Aesthetics, which has outlets in Birmingham and London, offered injections for an initial price of £70, dropping to £35 for subsequent jabs.

The clinic has a following of 15,000 people on Instagram.

None of the promotions seen by MailOnline made mention of the potential side effects or risks.

All three clinics were contacted about their advertisements.

In separate rulings last week, the ASA found ads ran by the clinics in January broke rules by advertising Kenalog.

All but one clinic — Lucy Isabella Beauty & Aesthetics — accepted the ASA rulings, stating they were ‘unaware of the advertising rules relating to prescription-only medicines and had since removed the ads’.

ASA has told the clinics the ads must not appear again and that they must not promote prescription-only medicines to the public in future. 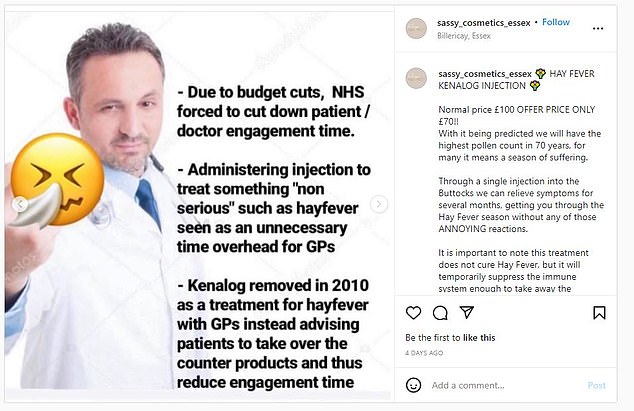 Sassy Cosmetics Essex used an Instagram post to offer the injection for the discounted price of £70, down from £100. It references the high pollen levels expected in the coming days. ‘With it being predicted we will have the highest pollen count in 70 years, for many it means a season of suffering,’ it says

WHAT IS HAY FEVER?

Hay fever is an allergic reaction to pollen, a fine powder which comes from plants. There is more pollen in the air in the spring and summer when plants are flowering.

The reaction usually happens when pollen comes into contact with someone’s eyes, nose, mouth or throat.

People suffering from the allergy can put Vaseline around their nose to trap the pollen, wear wraparound sunglasses to keep pollen out of their eyes, wash clothes regularly and vacuum and dust indoors.

Avoiding grass, cut flowers and smoke can help reduce symptoms, as can drying clothes indoors where pollen is less likely to stick to them.

Margaret Kelman, a specialist allergy nurse for charity, Allergy UK, said the charity did not recommend hay fever suffers get these injections, which are classified as corticosteroids.

‘This is in line with current UK guidelines due to the health risks and side effects of this type of medication,’ she said.

She said compared to other hay fever treatments which target a single part of the body, such as the lungs, Kenelog injections affects every part of your body, meaning there are increased risk of side affects.

In addition to increased risk of infection, Ms Kelman said other potential side effects included: ‘mood swings, stomach problems, increase in blood pressure and blood sugars as well as the risk of severe allergic reactions.’

If suffers got more than one injection they also opened themselves up to other serious health problems.

‘Repeated applications of high doses of corticosteroids can include weight gain, skin thinning, bone pain and increase the tendency towards visual problems including glaucoma, and osteoporosis.’

A MHRA spokesperson said a prescriber may opt to give a hay fever sufferer Kenalog outside of NHS guidance as a matter of ‘personal responsibility’.

However, the spokesperson said as the injections were only available via prescription, clinics are barred from advertising them to the public.

Repeat offenders of the UK advertising rules could face being passed onto Trading Standards who can push for criminal prosecution for those involved who can fines or even imprisonment. 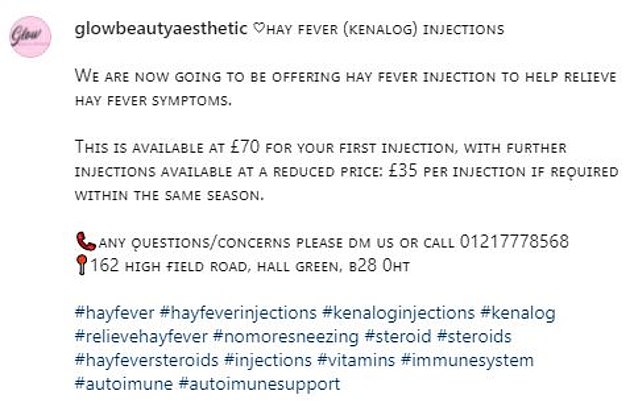 And Glow Beauty & Aesthetics, which has outlets in Birmingham and London, offered injections for an initial price of £70, dropping to £35 for subsequent jabs

It comes as hay fever tablets run low across the country due to an ingredient shortage – and the timing couldn’t be worse as pollen levels rise.

Stocks of chlorphenamine maleate — an active ingredient in Piriton medication and other such remedies — are widely limited.

Piriton tablets for adults are out of stock online at Boots, Lloyds Pharmacy and Coop Pharmacy, although their syrups for children are still available.

It is understood that tablets using cetirizine hydrochloride are in good supply, which includes Allacan, Benadryl, Piriteze and own-brand varieties.

Both cetirizine and chlorphenamine can be used to treat hay fever, but people often find that one is more suited to them, the NHS says.

Medication using cetirizine hydrochloride is less likely to make someone feel sleepy as a side effect.

Unlike a cold which normally goes away within a week, hay fever can last for weeks or months.

These make the blood vessels dilate, prompting the release of fluid from capillaries, triggering a runny nose, sneezing and weeping eyes.

While not life-threatening itself, tens of thousands of hay fever sufferers also suffer from asthma, which can flare-up during periods pollen bombs. Asthma attacks can be life-threatening.

But the NHS says there are things people can do to ease their symptoms when the pollen count is high this weekend.

They include putting Vaseline around your nostrils to trap pollen, wearing wrap-around sunglasses to stop pollen getting in the eyes and showering and changing clothes after being outside to wash pollen off.