It comes as Britain delivers arms to Europe’s second-largest country which has up to 100,000 Russian troops massed near its border. A group of about 30 elite British troops has arrived in Ukraine to help train Ukrainian armed forces in how to operate anti-tank weapons gifted to the country by the UK.

The news of Britain’s national anthem trending on Twitter in the eastern European country led commentator Darren Grimes to tweet: “God Save the Queen is trending in the Ukraine in thanks for our support. Be proud to be British.”

New Statesman international editor Jeremy Cliffe tweeted: “‘[G]od save the [Q]ueen’ is trending on Twitter in Ukraine – a reference to the flow of British arms deliveries.”

Activists gathered outside the UK’s embassy in Kiev on Friday to express their gratitude to the British people for providing weapons to boost Ukraine’s defence capabilities.

Members of the Ranger Regiment have been flown over to Ukraine on military planes which have also airlifted some 2,000 anti-tank missile launchers to the country.

Sky News reports that British surveillance aircraft have also been seen as part of a “quiet but notable” build-up of support to Ukraine’s military. 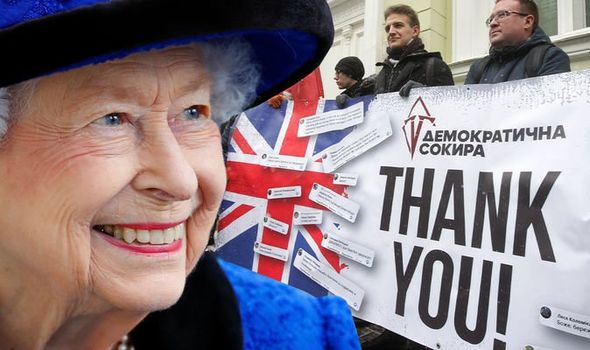 God Save the Queen is trending in Ukraine (Image: Getty)

Activists outside the UK Embassy in Kiev express their gratitude to the British people (Image: Getty)

Defence Secretary Ben Wallace told MPs on Monday that the UK is putting all its effort into helping the Ukrainians to help themselves.

He said: “I have to be honest here, Russia has the biggest armed forces in Europe.

“Ukraine is not a member of NATO and I think it would be false hope to say that the British armed forces would be going unilaterally to Ukraine to join forces alongside Ukrainians in that environment, which is why we are putting all the effort in helping Ukraine help themselves, sanctions packages and diplomatic efforts.”

Mr Wallace announced that Britain would increase its military support to Ukraine, boosting the number of UK military personnel on the ground as trainers.

He said: “We have taken the decision to supply Ukraine with light, anti-armour, defensive weapon systems.

“A small number of UK personnel will also provide early-stage training for a short period of time, within the framework of Operation Orbital, before then returning to the UK.”

Operation Orbital is the name given to a British training mission in Ukraine set up in 2015 after Russia annexed Crimea the year before.

Russia: The West’s are playing ‘exactly into’ Putin’s games

Mr Wallace explained that the support is for short-range and defensive weapons capabilities, adding that they are not strategic weapons and pose no threat to Russia.

He said: “They are to use in self-defence and the UK personnel providing the early-stage training will return to the UK after completing it.”

Moscow has also moved troops and equipment from its far east region to Belarus for “joint exercises” until February 20.

With Belarus sharing Ukraine’s northern border, the move has opened a new front for a potential Russian attack.

A Ukrainian serviceman patrols at a position on the frontline with Russia (Image: Getty)

It also ensures diplomatic efforts will take place against the backdrop of an ongoing show of Russian military force.

Meanwhile, Britain warned Mr Putin and President Xi Jinping of China on Friday that its allies would stand together to fight for democracy against dictatorships that it said were more emboldened than at any time since the Cold War.

Foreign Secretary Liz Truss said the UK and its allies in the free world must respond together to global threats, deepen ties with democracies in the Indo-Pacific and face down global aggressors who were using economic dependence to try to get what they want.

Ms Truss and Defence Secretary Ben Wallace met Australian counterparts in Sydney for the annual Australia-United Kingdom Ministerial Consultations, where a deal for Australia to acquire nuclear submarines was discussed.

The Interfax news agency cited Russia as saying on Friday that Mr Wallace has been invited to Moscow by his Russian counterpart Sergei Shoigu for talks on security and easing tensions in Europe.

Mr Wallace extended a similar invitation to Mr Shoigu this week, asking him to visit London to discuss issues related to mutual security concerns amid the standoff between Moscow and the West over Ukraine and its NATO ambitions.

Russia denies planning an attack on its neighbour, but says it could take unspecified military action if a list of demands are not met, including a promise from the Alliance never to admit Ukraine.