On Friday Kate Bedingfield, the White House’s director of communications, said: “We have seen incontrovertible evidence that this has been a strategic disaster for Russia.” It echoed an intelligence report by the UK’s Ministry of Defence on Thursday, which claimed Putin is redeploying thousands of his troops in Georgia to boost his military’s flagging forces in Ukraine.

As 1,200 and 2,000 of Moscow’s soldiers are to be organised into three battalion tactical groups, the MoD described it as “highly unlikely” for the Kremlin to make such a move unless it was forced to as a result of “unexpected losses”.

Ms Bedingfield, in apparent agreement, said Putin is “working to redefine the initial aims of their invasion”.

UK Defence Secretary Ben Wallace has pointed to losses within the Russian military, claiming Putin is “not the force he used to be”.

NATO estimates of some 7,000 to 15,000 casualties among Russian soldiers, many of them inexperienced conscripts, in the first month of the war leads to a series of inevitable questions. 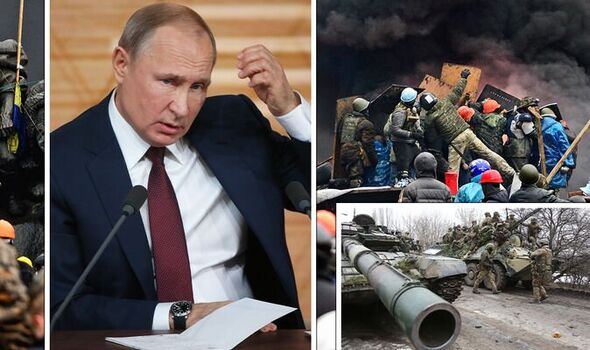 Is Putin crashing? Experts and insiders suggest so (Image: Getty)

Psychotherapist Noel McDermott said Putin’s “belief system” is for the first time ever being challenged – however, with little success.

He told Express.co.uk: “Putin is thinking all the c*** that he has been given by his advisors who have been afraid to tell him the truth.

“He is like any protected, wealthy, privileged, entitled person.

“They surrounded themselves with people whose livelihoods are dependent on them.

“And that type of privilege and wealth where your money and power protect you from consequences leads to an inflated magical sense of your own abilities.”

Putin advisors have ‘misled’ him over Ukraine conflict

He continued: “And this will be the first time in the whole of Putin’s life, I imagine, where he is receiving consequences from his actions.

“They are consequences that his wealth, privilege and inner circle cannot protect him from.

“I pretty much guarantee, like any sort of narcissist, he’s going through a horrific crash.”

“His army is exhausted, he has suffered significant losses. The reputation of this great army of Russia has been trashed.”

Losses within Russia’s army are leading to speculation Moscow attacked with little to no strategy (Image: Daily Express)

Civilians and the infrastructure vital to their survival cannot be deliberately attacked. It is one of the rules contained in the Geneva Conventions as well as in other international laws and agreements as, in the words of the Red Cross, “even war has rules”.

This week, the UK asked a former judge at the International Criminal Court (ICC) to help Ukraine investigate potential war crimes by Russia, which has been widely regarded as a sign of hope the Kremlin — and Putin in particular — will pay for their actions.

The ICC, alongside the International Court of Justice (ICJ), has roles in upholding the rules of war.

Ukraine has begun a case against Moscow, and if the ICJ ruled against it, the UN Security Council (UNSC) would be responsible for enforcing that.

But Russia — one of the council’s five permanent members — could veto any proposal to sanction it.

There have been a series of one-off courts since World War Two, including the tribunal investigating war crimes during the break-up of Yugoslavia or the prosecution of those responsible for the 1994 Rwanda genocide.

But Mr McDermott is unsure whether Putin will set foot inside a court.

The expert said: “No matter what happens, he manages to blame it on somebody else and never take responsibility because the consequences never reached him.

“He’s never been in court. He’s always been able to riggle out of it.”