Russia has threatened to “mirror” the EU’s plot to “phase out all use of Russian gas and oil” immediately by slashing deliveries to Europe.  While the UK only gets around three percent of its gas from Russia, the move would likely send prices of global imports soaring due to the nature of the integrated market. Britain also imports some Russian gas indirectly from the Netherlands and Belgium, while Norway remains the biggest exporter of gas to the UK.

According to some estimates, Britain is expected to fork out £2billion for Russian imports of natural gas imports this year.

But the UK may be able to avoid having to fork out that extra cash if it focuses on its domestic reserves.

As prices rise, Prime Minister Boris Johnson has been urged to address these domestic supplies, which critics say are being pushed aside over his climate policies. 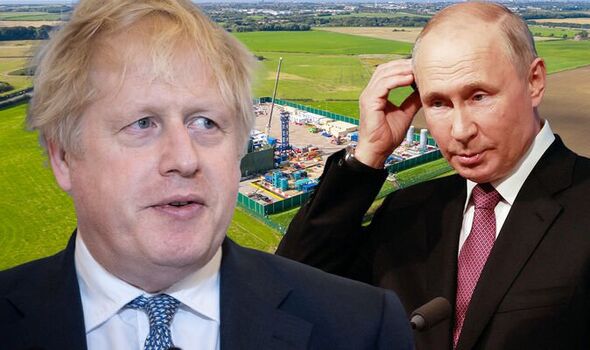 But after coming under fire, Mr Johnson said at a Downing Street press conference on Monday that Britain would take a look at using more domestic energy resources as part of an “energy supply strategy”.

READ MORE: Putin’s nuclear threat to UK: Nine locations that could be obliterated

A 2014 study estimated that the Midland Valley has around 1.4–3.8 tcm that could be accessed.

But an obstacle stands in the way of accessing those supplies.

Shale gas is extracted through a process called fracking, but this was banned by the Government back in 2019 after scientists raised concerns about earthquakes and the threats it posed to local communities.

A review published in March 2020 by Warwick Business School said fracking could produce between 90 and 330 billion cubic metres (bcm) of natural gas between 2020 and 2050.

Now, the Government has been urged to lift the ban so Britain can access more of its domestic reserves and avoid the huge price increases for gas imports.

Mr Johnson has also been faced with calls by members of his own party to reverse the Oil and Gas Authority’s order to shut off two shale gas wells in Lancashire.

More than 30 Tory MPs and four peers sent a joint letter addressed to the Prime Minister.

The two sites are the country’s last remaining locations for fracking in England.

The MPs are being led by Craig Mackinlay and Steve Baker, the chairman and deputy chairman of the Conservative Net Zero Scrutiny Group.

Lee Anderson, MP for Ashfield, said: “At a time of increasing insecurity over fuel supplies, we should be using the huge shale gas resources right under our feet.

“I firmly believe fracking can lead to lower fuel prices, but we have effectively banned it on spurious safety grounds.

“Despite bogus claims to the contrary, fracking can quite safely take place without causing earthquakes or polluting aquifers.”

And it appears these comments may have been taken on board.

Mr Johnson said at the Downing Street press conference: “One of the things we are looking at is the possibility of using more of our own hydrocarbons, and you’ll have heard already about what the business secretary has had to say about licences for UK domestic production.

“That doesn’t mean we are abandoning our commitment to reducing CO2.

“ We have got to reflect the reality that there is a crunch on at the moment. We need to intensify our self-reliance as a transition with more hydrocarbons.”

But critics of fracking have argued that the lifting the ban will not have an immediate impact on Putin’s gas squeeze.

“This winter 50 percent of the gas produced in the UK was actually exported because the price was higher.

“So actually the idea that we actually go down the route of fracking rather than insulation, energy efficiency and renewables is actually the wrong way to go and plays into Putin.”