Putin threatens Britain over Ukraine 'interference' in sick nuke threat 'We'll use them!'

In a chilling televised address, the Russian President said: “We have tools no-one else can boast of. We don’t want to brag about them…we will use them.”

The Kremlin leader, addressing lawmakers in St Petersburg, warned that his country’s response to anyone who ‘threatens’ Russia would be ‘lightning-fast’ and deadly.

“If someone intends to interfere in what is going on from the outside they must know that constitutes an unacceptable strategic threat to Russia. They must know that our response to counterstrikes will be lightning fast. Fast,” he said.

“We have all the weapons we need for this. No one else can brag about these weapons, and we won’t brag about them. But we will use them.”

Though Putin did not mention nuclear weapons directly, he was almost certainly referring to Russia’s new Sarmat 2 nuclear missile which was tested for the first time just days ago and that he boasted is unlike any other weapon in the world. 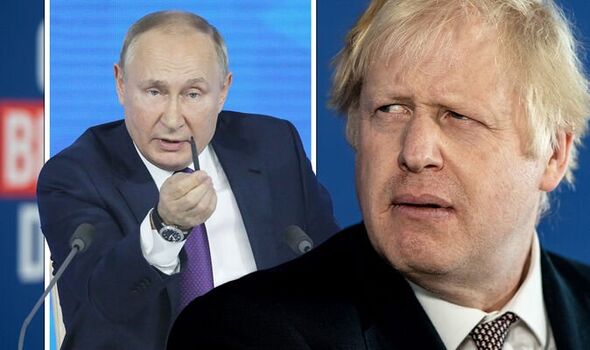 A Russian state TV presenter issued the threat to wipe Britain off the map (Image: Getty)

The Kremlin has announced it will be building some 46 ICBM  strategic combat Sarmat systems – featuring the hypersonic 208-ton 15,880mph weapons and nicknamed ‘Satan-2’.

The first regiment to deploy the new ‘unstoppable’ missiles will be in Krasnoyarsk, Siberia, and they are to go into use later this year.

And in an extraordinary televised threat to Britain on the State-controlled Russian TV, pro-Putin TV anchor Vladimir Solovyov said: “As it turned out, one Sarmat means minus one Great Britain.”

The popular host – known as ‘Putin’s voice’ – said he made the threat because the British had been “totally boorish” in voicing the UK’s support for Ukraine – a reference to comments made by Armed Forces Minister James Heappey.

Russia also stressed the remarks by Mr Heappey, who backed Ukraine’s right to target mainland Russia, made a ‘proportional response’ against the UK legitimate.

During the screening of the programme with Mr Solovyov, the head of the Russian space agency Dmitry Rogozin, also a close Putin ally, told Solovyov that “we will have 46 combat complexes of strategic weapon  Sarmat [Satan-2]”.

“Everything is according to plan with us,” he said.”

“They will go into the same silos where Voevoda [missiles are now deployed] “It is all according to plan….”

A new test date for the Sarmat system is due to be decided later this week.

And welcoming the new weapons to the Kremlin’s armoury, President Putin said: “This is a big, significant event in the development of advanced weapons systems of the Russian army.”

“The new complex has the highest performance characteristics and can break through all modern anti-missile defences.” “There is nothing like this in the world, and won’t be for a long while.”

And the leader of the Kremlin added: “This truly unique weapon will be strengthening the combat potential of our armed forces.” “It will reliably secure Russia from external threats, and will force those trying to threaten our country in the heat of frenzied aggressive rhetoric.”

Putin warned that he will use nuclear weapons (Image: Getty)

The Kremlin’s warning that it could target military sites in the UK because of British open support for Ukraine, and could also hit British diplomats returning to Kyiv, came after Mr Heappey’s ‘provocative’ talk of backing Ukrainian bombing of Russia.

Maria Zakharova, the Russian foreign ministry spokeswoman, suggested that strikes could be authorised against NATO states who provide arms to Ukraine.

She warned: “Do we understand correctly that for the sake of disrupting the logistics of military supplies, Russia can strike military targets on the territory of those Nato countries that supply arms to the Kyiv regime?

“After all, this directly leads to deaths and bloodshed on Ukrainian territory. As far as I understand, Britain is one of those countries.”

But Moscow’s threat of a “proportional response” against Britain for backing Ukrainian strikes behind Russian lines was branded “unlawful” by Deputy Prime Minister Dominic Raab.

He said Putin’s regime was only adding to its “pariah status” by threatening other countries, including by shutting off gas supplies to Poland and Bulgaria.

Mr Raab, who is also Justice Secretary, said: “The Russian statement is unlawful and what we’re doing is lawful, we’re entitled, all states are entitled to provide military support to any state exercising the right of lawful defence against an aggressive invasion.

“Frankly if Russia starts threatening other countries it only adds further to their pariah status and will only further the solidarity and consensus in the international community that they must be stopped.”

Mr Heappey had argued it was “not necessarily a problem” even if Ukrainians used British-donated weapons to strike Russia in its own territory “to disrupt the logistics that if they weren’t disrupted would directly contribute to death and carnage on Ukrainian soil”.

According to the Interfax news agency, the Russian defence ministry said: “We would like to stress that the direct provoking by London of the Kyiv regime into such activities, should there be an attempt to realise them, will immediately lead to our proportional response.”

“The advisers from among the subjects of one of the Western countries that are located in Ukrainian decision-making centres in Kyiv will not necessarily be a problem when Russia decides to take retaliatory action,” the ministry said.”

While the Russian statement did not make clear its possible target, Prime Minister Boris Johnson has announced that diplomats will return to the British embassy in Kyiv this week.

The return after officials were moved to the western city of Lviv just before the invasion was launched in February was understood to be still going ahead despite the Kremlin’s threats.

And he believed that Russia could hit western targets outside Ukraine, adding that the West was becoming ‘increasingly involved in a proxy war’.

'Uneven!' EU farce as countries only sending 'low levels' of weapons to Ukraine