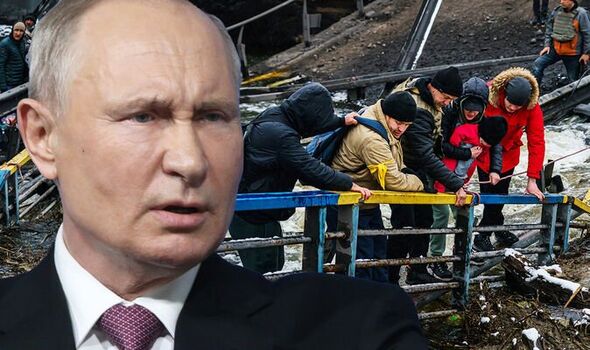 In 2019, the Syrian government with the support of Russia created a humanitarian corridor to evacuate civilians but those corridors ended up being an excuse to massively shell cities.

Moscow has been under increased pressure from western countries to end its intense bombardment of Ukraine, which has forced a million civilians to flee in just over a week.

According to Ukraine’s presidential advisor Mykhailo Podolyak, the two sides will together provide humanitarian corridors to evacuate civilians and to deliver food and medicine to the areas with the harshest battles.

While Mr Podolyak was happy with the corridors, he tweeted: “Unfortunately, the results Ukraine needs are not yet achieved.” This comes as Russian invasion forces continued to surround and rain missiles on Ukrainian cities.

Dr Samuel Ramani, Associate Fellow at the Royal United Services Institute for Defence and Security Studies and International Relations Tutor at the University of Oxford, issued a stark warning to Express.co.uk.

He said: “I’m very sceptical that this phrase humanitarian corridor is nothing more than a euphemism.

“What ended up happening in Syria in 2019, following the creation of corridors, was massive aerial bombardment and a renewed state of near siege.

“This led to malnutrition and basically the destruction of lives up to three million people.”

Terrified Syrians who were trapped in their homes in Aleppo and Idlib, were told their only means of escape from the besieged cities was through humanitarian corridors. But these were soon branded “death corridors”.

“This led to malnutrition and basically the destruction of lives up to three million people.” (Image: PA IMAGES)

“I’m very sceptical that this phrase humanitarian corridor is nothing more than a euphemism.” (Image: PA IMAGES)

Dr Ramani thinks the agreement has happened as a means of “competence building between the Russians and Ukrainians.” He said the rest of Putin’s speech is “incredibly dark”.

Dr Ramani continued: “He’s talking about fighting a war against neo-Nazis and is claiming that the special military operation is supposedly going well. So there’s really nowhere else you compromise and the only possible area where there could be some kind of a timeline. So we’re maybe deluding ourselves, but we’re hopeful that something can happen.”

In 2018, US State Department spokeswoman Heather Nauert said at a briefing on the Syrian war: “The idea that Russia is calling for a so-called humanitarian corridor, I want to be clear, is a joke.”

She said residents feared using such corridors because of horrors over being conscripted into Assad’s forces, never returning to their homes, or being killed.

Then the brutal assault from Assad’s army and an indiscriminate bombing campaign (Image: PA IMAGES)

Corridors from eastern Ghouta led to the mass unlawful internment of tens of thousands of civilians.

The Assad regime with Putin’s forces declared that anyone who did not make use of the corridors in Syria and was left behind was therefore an enemy combatant.

Then the brutal assault from Assad’s army and an indiscriminate bombing campaign, led by Russia, meant anyone left behind was killed while cities and towns were reduced to rubble — all under the guise that only combatants remained behind.

Dr Ramani says: “Those tactics are all playing out Ukraine very similarly and I’m thinking similar tactics are going to be used to devastating effect on civilians.”

Emma Beals, a Senior Adviser at the European Institute of Peace, tweeted: “Russia is likely to use ceasefire strategically — resupply, regrouping. If they’re bogged down and struggling with supplies it may explain the willingness to use corridors. Use the window, but watch supply lines and movements.

“Unclear if routes or details were agreed, but Russia is likely to agree in principle then propose unviable or unsafe corridors and problematise any movement of goods or assistance.

“Attacks on aid convoys, fleeing civilians, and infrastructure are all possible and documented. Where achievable, international or impartial monitors and guarantors should be agreed upon and deployed to facilitate the safe passage of goods and civilians.”

He says the only way we will know the outcome of humanitarian corridor use in Ukraine is when they l (Image: PA IMAGES)

In August 2014, a humanitarian corridor was supposedly being prepared for Ukrainians in Ilovaisk, which was under siege. Instead of safety, Ukrainians were met with gunfire as Russians massacred around 500 Ukrainian soldiers that were guaranteed safe passage through the corridor.

Dr Ramani said it was one of the most costly battles of the first war in Donbas, which then led to “several months worth of fighting and civilian casualties until the Minsk agreements resigned.”

He says the only way we will know the outcome of humanitarian corridor use in Ukraine is when they likely won’t function. Dr Ramani says: “The Russians will continue to carry out their military bombardments and churn out discriminate casualties everywhere else.”

Zuckerberg can ‘brainwash whole populations’ with ‘most dangerous invention since nukes’