Putin's forces in tatter: Bodies of 2,500 Russians transported to Belarus in secret

Ukraine: Russia to ‘double down’ on brutal force to push troops

The bodies of more than 2,500 Russian soldiers have been transported to Russia’s neighbour Belarus “in the dead of night” to disguise the true number of casualties in Ukraine, doctors have claimed. Russia is said to be quietly transporting its wounded and dead across the border to keep the true death toll from its invasion of Ukraine under wraps, as the war enters its fourth week.

Hospital wards in the Homel, a southeastern region of Belarus less than 150 miles north of Kyiv, are full of “terribly disfigured” soldiers and morgues are overflowing with corpses, locals told The Telegraph.

A medic working in Belarus told Radio Free Europe that more than 2,500 bodies had been transported by train or plane back to Russia from the region by March 13, just 18 days since President Vladimir Putin launched the attack on Ukraine.

The figure has not been independently verified.

Another doctor in the town of Mazyr said that Russia’s efforts to transport bodies back to the country were increasingly conducted at night to reduce unwanted scrutiny.

The medic said: “Earlier, the corpses were transported by ambulances and loaded on Russian trains.

“After someone made a video about it and it went on the internet, the bodies were loaded at night so as not to attract attention.” 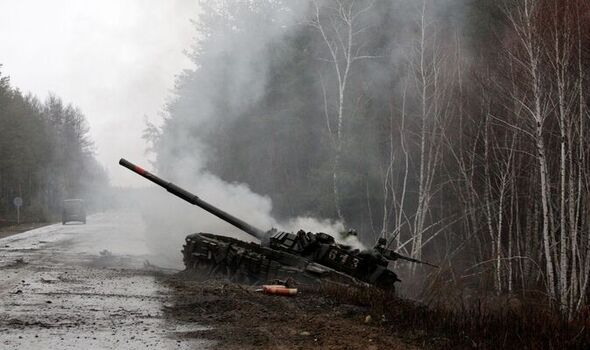 Russia has suffered heavy losses in the conflict in Ukraine. (Image: GETTY)

Ukrainian soldiers have put up a valiant fight against the Russian onslaught. (Image: GETTY)

Russia has been accused of severely down playing the death toll of troops fighting the war in Ukraine.

The Kremlin acknowledged on March 2 that nearly 500 soldiers had been killed and 1,597 injured in its first announcement of fatalities, although it had not provided any update since.

The true figure is thought to be much higher. Ukrainian officials claim 14,000 Russian have died so far.

US intelligence this week estimated that the number of Russian soldiers killed was in fact over 7,000, though this too is taken as a “conservative” estimate.

If accurate, Putin would have lost more soldiers in 20 days than the number of American troops killed over 20 years of war in Iraq and Afghanistan combined.

US estimates say between 14,000 to 21,000 Russian soldiers have been injured since the fighting began, and the Russian military has lost at least four generals.

With more than 150,000 Russian troops now involved in the conflict in Ukraine, officials at the US Pentagon have said the staggering death toll and number of casualties could likely destroy morale in Putin’s forces.

The Kremlin is therefore understandably keen to keep the devastating consequences of the invasion on Russian soldiers out of the public eye.

Belarusian leader Alexander Lukashenko is a close ally of Putin and has supported Russia’s invasion of Ukraine, allowing thousands of Russian troops to enter the country over its borders.

The country’s strongman leader, who caused outrage throughout the West in 2020 when he claimed power in an allegedly fraudulent election and launched a brutal crackdown on dissent in Belarus, has defended Putin as “a sane, healthy person” in the face of international condemnation.

He said on Saturday: “He will catch cold many times at our funerals. He is a completely normal and reasonable person.

“The West better throw this hoax out of their heads … all of that talk is to undermine trust in [the] president inside Russia.”

Over three million people have been forced to flee Ukraine since the war began. (Image: GETTY)

Locals in towns near Belarus’ border with Ukraine have reported an influx of bodies entering the country from Russia, with morgues overflowing and hospitals packed.

One man told The Telegraph: “Passengers at the Mazyr train station were shocked by the number of corpses being loaded on the train.

“After people started shooting video, the military caught them and ordered them to remove it.”

Tens of thousands of Russian troops were stationed in Belarus ahead of the invasion on February 24, when Putin launched an unprovoked attack on Ukraine and Kremlin forces poured into the country.

The invasion has reportedly not gone to plan, with Russian troops struggling to gain ground in the face of valiant fighting for Ukrainian forces.

However, Kremlin troops have subjected Ukrainians to weeks of heavy fire and bombardment, killing thousands of civilians and forcing over three million people to flee the country.

Cheryl through the years: MailOnline takes a look back at her career