Colonel Ivan Grishin, the commander of Russia’s 49th Anti-Aircraft Missile Brigade, is reported to have been the latest high-ranking officer to have been killed in a massive blow to Moscow. He is said to have been killed in the Russian border town of Smolensk on Saturday, according to numerous reports circulating on social media. A post on VK, the Russian online social media and social networking service based in St Petersburg, appeared to confirm the killing of Grishin.

It read: “The commander of the 49th anti-aircraft missile brigade stationed in Smolensk was killed.

“According to initial information, this happened yesterday 16.04.2022.

“On the territory of Ukraine, while performing military duty, the commander of the 49th anti-aircraft missile brigade, a tactical air defence unit of the Ground Forces of the Russian Federation stationed in Smolensk, Colonel Grishin Ivan Ivanovich died! 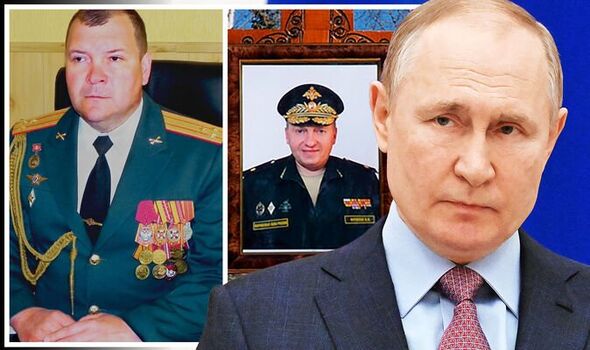 Putin news: Ivan Grishin and Vladimir Frolov were killed in a major blow to the Russian President (Image: GETTY/TELEGRAM/EAST2WEST)

Putin news: The Russian President has been humiliated once again (Image: GETTY)

Major General Vladimir Frolov, deputy commander of the 8th Combined Arms Army, had become the eighth Russian general to be killed in battle.

He was laid to rest with full military honours in St Petersburg on Saturday.

The city’s governor Alexander Beglov, a close ally of Putin, said he sacrificed his life so that children, women and the elderly in Donbas would not hear bombs exploding again”.

In a gushing eulogy at the general’s funeral, he said he was from a military family and “died the death of the brave in battle against Ukrainian nationalists”.

Putin news: Ivan Grishin is the latest high-ranking Russian officer to have been killed (Image: TELEGRAM)

Frolov was “a true patriot, a brave and courageous man” who “honestly and to the end fulfilled his military and human duty”.

The number of high ranking officers killed in battle during the war in Ukraine destroys claims from Putin that his “special military operation” is going according to plan.

Last month, in another blow to the Russian President, Lieutenant-General Andrei Mordvichev, commander of the 8th Combined Arms Army, who was killed in battle at Chornobaivka, near the southern city of Kherson.

That followed the deaths of Major General Andrei Kolesnikov of the 29th Combined Arms Army and Vitaly Gerasimov.

In early March, Major General Andrei Sukhovetsky was reportedly shot dead by a sniper at the battle for Hostomel Airfield about 30 miles outside Kyiv.

General Magomed Tushaev died when his Chechen special forces column, including a huge 56 tanks, was taken out by Ukrainian forces near Hostomel.

Russia is already known to have lost eight generals since beginning its war of Ukraine nearly two months ago – a conflict that is said to have cost the lives of 20,000 troops.

This latest blow to Putin comes with footage emerging of Russia’s flagship Moskva warship engulfed in flames and sinking in the Black Sea after it was struck by Ukrainian missile.

Smoke is seen billowing out of the vessel as it was being towed away by a tug boat.

Anton Gerashenko, adviser to the Kyiv interior ministry, said he “died during an explosion and fire on board the former flagship of the Black Sea Fleet of the Russian Federation”.

Russia claimed the crew was evacuated but there is mounting speculation of reported deaths among the battleship.

Moscow has not gone public about the possible death of Kuprin, but has also not announced the deaths of many prominent military personnel since the war in Ukraine began nearly two months ago.