The war in Ukraine has entered its fifteenth day, with more horrifying reports of civilian infrastructure targeted. Sergei Lavrov, Russia’s foreign minister, hit out at what he described as a “pathetic outcry” over the bombing of a maternity ward and children’s hospital in Mariupol, southeastern Ukraine. As torrid images of people being carried out of the hospital surfaced on social media, Lavrov said it is “not the first time we see pathetic outcries concerning the so-called atrocities perpetrated by the Russian military”.

The most recent atrocity comes as Russia continues to feel the squeeze from sanctions imposed by the West and other governments around the world.

Some credit ratings agencies now believe Russia will soon be unable to pay its debts, warning that a default is “imminent”.

Sharp sanctions have also forced Russia to shut its stock exchange, as well as banning all residents from transferring money abroad.

And, private companies from around the world like McDonald’s, Spotify, Starbucks, and Coca-Cola have temporarily ceased their operations in the country, taking with them thousands of jobs and business. 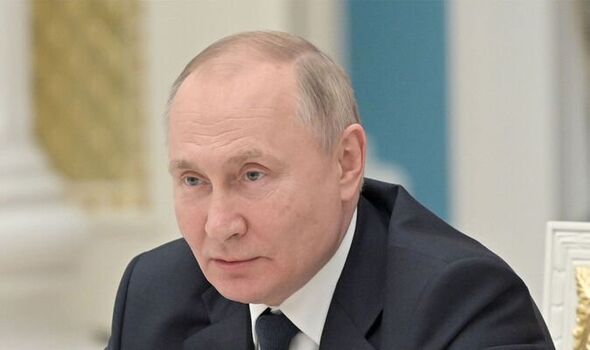 As Putin becomes increasingly isolated and runs out of options, Express.co.uk spoke to Aubrey Immelman, associate professor of psychology at the College of Saint Benedict, Saint John’s University, who has profiled political leaders from around the world and their psychologies.

His psychological profile of Putin, published in 2017 using data collected in 2014, found that the Russian leader possessed several primary personality patterns: “Dominant/controlling (a measure of aggression or hostility), ambitious/self-serving (a measure of narcissism), and Conscientious/dutiful, with secondary Retiring/reserved (introverted) and Dauntless/adventurous (risk-taking) tendencies and lesser Distrusting/suspicious features”.

Speaking about a scenario in which Russia is defeated by Ukraine, Prof Immelman suggested that Putin could descend into “paranoia and delusion”.

He said: “Putin is definitely high on the level of narcissism, and he’s maybe even slightly higher on aggressiveness.

JUST IN: Putin warned he could be ousted from power: ‘Had enough!’

Ukraine: Kharkiv, the country’s second-largest city, has been pummelled with missiles and rockets (Image: GETTY)

“[He will be humiliated] if his military is defeated in Ukraine, which is a long shot.

“But I think it’s already humiliating the fact that it did not take the two days he thought it would.

“It’s under those circumstances that maybe some of these paranoid or delusional characteristics might begin to emerge — the kinds of things the late Betty Glad talked of [the American political scientist].

“What research around this entails is that the personality structure begins to disintegrate and the person’s behaviour might become highly erratic and impulsive.”

Much has been said of his mental state since Russia’s invasion of Ukraine on February 24.

Many experts claim that his mental state has seriously declined over the course of the coronavirus pandemic — much of which Prof Immelman does not subscribe to.

Z sign: The letter has been pushed as a chilling symbol of support for Russia’s military incursion (Image: GETTY)

Isolate: Putin has taken to conducting meetings across a huge table (Image: GETTY)

Putin’s time as a KGB officer in Soviet Russia is said to have had a defining influence on him and his views of the West.

Ian Robertson, a neuropsychologist at Trinity College Dublin, has argued that one of Putin’s main driving forces is contempt.

He told i News: “Contempt must be considered as one of the most important elements of his psychology.”

Progressive isolation and a contempt for anyone else’s opinion, Prof Robertson said, are classic signs “hubris syndrome” — a syndrome associated with power, more likely to manifest itself the longer the person exercises power and the greater the power they exercise.

As a result, he thinks Putin’s political trajectory “is as much personal as political, because once the hubris syndrome takes hold in the brain, the personal and the national are identical because the leader is the nation and its destiny”.

Putin profile: He has been president for a total of nearly 20 years (Image: Express Newspapers)

There is a raft of evidence that suggests huge amounts of power for long periods can have an addictive, dopamine-boosting effect on the brain.

He said that such changes in the frontal lobe of the brain diminish the affected person’s ability to weigh up risk.

Prof Robertson added: “They tend to exaggerate their past successes and downplay their failures.”

Meanwhile, Lavrov has since said that Putin is taking care of Russia’s economy in the face of crippling sanctions.

Speaking at a press conference, he said of Russia’s economic problems: “We will cope with them ‒ we have coped with difficulties at all junctures of our history.”

He said Russia will “come out of the crisis with a better psychology and conscience”.

Lavrov continued: “We have no illusions that the West can be a reliable partner,” he continued, saying it will “betray whoever, and will betray its own values”.

He added: “I assure you we will cope and will do everything not to rely on the West ever, in any areas of our lives.”