Princess Margaret was Queen Elizabeth’s younger sister. Born in 1930, she was four years younger than Elizabeth, and went on to be arguably one of the most popular royals in modern history. Known for her rebellious nature and gritty personality, she frequently made the front pages for her ‘party-girl’ lifestyle, as depicted in hit Netflix series The Crown. The show also highlights the sometimes difficult relationship the Queen had with her sister.

The pair became extremely close after their father, King George VI, ascended the throne in 1936.

But, just like any other siblings, they did not always get along.

Victoria Arbiter, a royal commentator for CNN among others, spoke to Channel 5’s 2020 documentary ‘Princess Margaret: Rebel Without A Crown’ about the sisters’ relationship.

She said: “There’s some lovely archive footage of Elizabeth and Margaret when they were growing up.

“It really speaks to the close relationship they shared, and you can understand why. 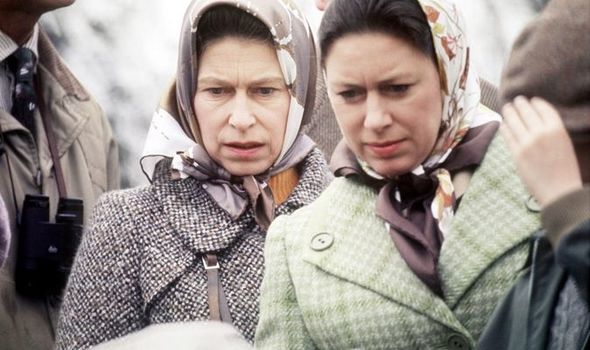 “They didn’t go to regular schools, they were each other’s best friend.”

The two princesses were educated at home under the supervision of their mother and their governess Marion Crawford.

Spending so much time together allowed the sisters to form an unbreakable bond.

But, Ms Arbiter added: “They could go at it.

The royal sisters in the grounds of the Royal Lodge, Windsor. (Image: GETTY)

“Marion Crawford, their governess, had said they didn’t hesitate to argue and fight.

“Elizabeth apparently had a good left hook whereas Margaret wasn’t shy to bite her sister in return.”

Mr Arbiter explained that, while they did have their ups and downs, they ultimately had each other’s backs when push came to shove.

Margaret’s arrival proved something of a relief for the then Princess Elizabeth, Ms Arbiter claimed, amid the pressures that were thrust on her at the age of 10.

Elizabeth and Margaret in the grounds of Royal Lodge with one of their corgis. (Image: GETTY)

Ms Arbiter said: “Elizabeth was quite happy for Margaret to be the centre of attention because she said, ‘If Margaret’s there, she makes everybody laugh’.

“And so it took the pressure off Elizabeth who perhaps was more introverted compared to her mischievous sister.”

Margaret was her father’s favourite, according to biographer Anne De Courcy.

She told Channel 5 that George VI was very much in her corner.

She said: “He [George VI] once said, ‘Elizabeth is my pride, but Margaret is my joy’.

The Queen And Princess Margaret both devoted their whole life to royalty. (Image: GETTY)

“And certainly he was the most important man in her life, always. It was her father who was completely central to her.”

The family-orientated world was turned on its head when Edward VIII abdicated the throne.

Before the abdication, Margaret was the younger daughter of the Duke and Duchess of York. Afterwards, Margaret effectively became the ‘spare’, even more so when Elizabeth became Queen.

While Elizabeth was busy carrying out royal duties, Margaret and the Queen Mother would spend a lot of time together.

Lady Glenconner served as a maid of honour at Elizabeth’s coronation in 1953, and later served as Margaret’s lady-in-waiting from 1971 until the princess died in 2002.

Her 2019 memoir, Lady In Waiting: My Extraordinary Life in the Shadow of the Crown, offered a fascinating insight into life behind the scenes.

She described how she lived with Margaret for the whole of 1990 at her Kensington Palace apartment, and travelled with her to every event.

She wrote: “Those weekends at Royal Lodge were always fun, despite the bouts of bickering between the Queen Mother and Princess Margaret, who at times had a slightly strained relationship.

“One would do things like open all the windows, only for the other to go around shutting them. Or one would suggest an idea and the other would dismiss it immediately.

“Perhaps they were too similar – I don’t think it is an unusual predicament for a mother and daughter.”