Queen 'broke down' in aeroplane toilet after hearing of tragic death

Princess Elizabeth’s life was turned upside down 70 years ago when she tragically lost her father, and the life she once knew. King George VI passed away aged just 56 of coronary thrombosis on February 6, 1952, 70 years ago this Sunday. Just days earlier, Elizabeth and her husband Philip, Duke of Edinburgh had flown from Heathrow Airport to Kenya, where they were due to stop before embarking on a tour of Australia and New Zealand.

The King had travelled to the airport to wave them off, going against the advice of those close to him not to do so.

It was the last time he was seen in public. Just six days later, he was found dead in bed at Sandringham House in Norfolk.

The new Queen and prince consort were staying at the Treetops resort in Kenya at the time — a game-viewing lodge built in a tree that overlooked an elephant waterhole.

Eric Sherbrooke Walker, the founder of Treetops, had his biography written by Nicholas Best. 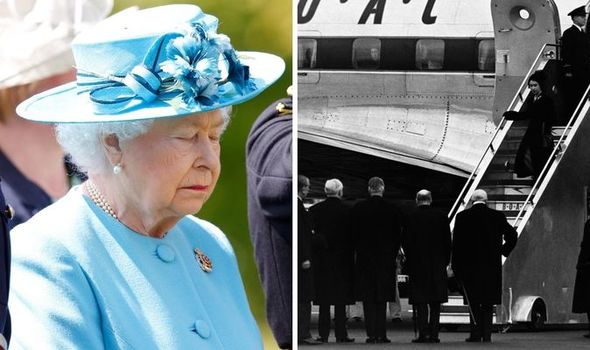 Queen ‘broke down’ in aeroplane toilet after hearing of tragic death (Image: GETTY)

Mr Best recalled in a 2012 comment piece in The Guardian that Prince Philip broke the news to his wife on the afternoon of February 6, informing her that she was now Queen.

News of the King’s death had been sent to Government House in Nairobi, but it could not be decoded because the keys to the safe which held the codebook were nowhere to be seen.

Instead, the royals heard from a local newspaper reporter called Granville Roberts, who worked on the East African Standard and was covering the royal visit.

They were driven to a nearby airstrip and, after a “subdued smile for the crowd”, they boarded the flight back to begin a new chapter of their lives.

It was on this flight, Mr Best wrote, that the new monarch finally wept.

He wrote: “The mask slipped once they were airborne. The Queen left her seat after a while.

“Her face was set when she returned, but it was obvious to the other passengers that she had been in the loo, having a good cry.”

Veteran broadcaster Sir Trevor McDonald spoke to one of the stewardesses on the flight home from the royal tour.

Writing in 2012 for the Daily Mail, he said: “A stewardess I interviewed recalled the sombre mood on the plane which ferried the new monarch home.

“She said that the Queen didn’t cry, but despite her sorrow, her charm and good manners did not desert her: she thanked all the crew before she disembarked.

“Ever since she has discharged her duties to perfection, and I feel honoured to have met her.”

Her Majesty has dedicated her entire life to royal services, developing a resolute public persona in the process.

Queen Elizabeth II is greeted on the tarmac by Winston Churchil and other senior figures. (Image: GETTY)

Her unwavering strength and stoicism has undoubtedly helped steady the nation in times of great adversity. Though she has been known to shed a tear on occasion, she has always done so with remarkable dignity.

Even after Philip had broken the terrible news of her father’s death, duty was at the very front of the new monarch’s mind.

Mr Best recalled the new Queen “immediately discussing the practicalities of getting back to England and writing letters of apology for the cancellation of her tour”.

Martin Charteris, her private secretary, told Mr Best that he considered the Queen to be “very composed, master of her fate” as she left Kenyan soil to return home.

Upon landing back in London, Her Majesty donned a black outfit and was greeted on the tarmac by Winston Churchill, before being driven away.

She met with senior Commonwealth and City of London representatives the following day, and read an official Proclamation declaring her reign as the new Queen.

She said: “By the sudden death of my dear father, I am called to assume the duties and responsibilities of sovereignty.

“My heart is too full for me to say more to you today than I shall always work as my father did throughout his reign, to advance the happiness and prosperity of my peoples, spread as they are all the world over.”

That speech marked the beginning of a new era, and 70 years on, the Queen continues to make history as the world’s longest-serving monarch.