Buckingham Palace said doctors were concerned for the 96-year-old head of state’s health in a rare update just after 12.30pm. Heir to the throne Prince Charles and Camilla are at the Queen’s bedside, while Prince William is travelling to Scotland.

Princess Anne, Prince Edward, Sophie and Prince Andrew are either already at Balmoral or on the way to see the monarch, who is said to be comfortable.

Prince Harry and Meghan Markle, who are currently in the UK, are also heading to Aberdeenshire having cancelled an appearance at a charity event tonight.

Kate has remained in Windsor with Prince George, Princess Charlotte and Prince Louis who had their first full day at their new school today.

A Palace spokesperson said: “Following further evaluation this morning, the Queen’s doctors are concerned for Her Majesty’s health and have recommended she remain under medical supervision. The Queen remains comfortable and at Balmoral.”

Liz Truss was informed of the update on the Queen as she unveiled her plan to tackle the energy crisis to MPs in the Commons today in her first major policy intervention as Prime Minister. 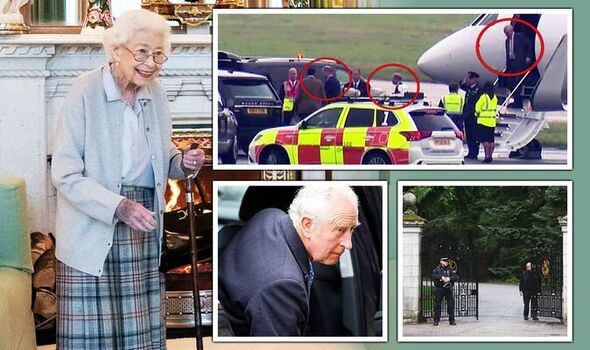 Senior royals are rushing to be at the Queen’s side amid serious health fears (Image: GETTY)

The Queen looked bright but frail at Balmoral earlier this week (Image: PA)

Nadhim Zahawi, the Chancellor of the Duchy of Lancaster, came into the Chamber and began urgently speaking to her while Labour leader Sir Keir Starmer was giving his response.

The Prime Minister later tweeted: “The whole country will be deeply concerned by the news from Buckingham Palace this lunchtime.

“My thoughts – and the thoughts of people across our United Kingdom – are with Her Majesty The Queen and her family at this time.”

It comes after the monarch appointed Ms Truss as Prime Minister at Balmoral on Tuesday in a busy day which also saw Boris Johnson tender his resignation.

She postponed a virtual Privy Council meeting on Wednesday after being advised by royal doctors to rest.

Concern for the nation’s longest-reigning monarch has been heightened in the past year.

The Queen, who has ongoing mobility issues, now regularly uses a walking stick and rarely carries out royal duties outside of her royal residences.

She looked bright but frail during her audience with Ms Truss, who is her 15th prime minister, earlier this week.

The Archbishop of Canterbury said the prayers of the country were with the head of state, who has a strong Christian faith.

The Most Reverend Justin Welby tweeted: “My prayers, and the prayers of people across the @churchofengland and the nation, are with Her Majesty The Queen today.

Charles, pictured at the Braemar Gathering earlier this month, is at his mother’s side (Image: GETTY)

The Duke and Duchess of Sussex, pictured on Tuesday, are making their way to Scotland (Image: GETTY)

“May God’s presence strengthen and comfort Her Majesty, her family, and those who are caring for her at Balmoral.”

He added: “Hoping for the best, but let’s be completely candid now, braced for the worst.”

The Queen is currently on her summer break in the Scottish Highlands, and not due to return until early October.

The Sun reported recently that the Prince of Wales had been making regular morning visits to see his mother.

The whole country will be deeply concerned by the news from Buckingham Palace this lunchtime.

My thoughts – and the thoughts of people across our United Kingdom – are with Her Majesty The Queen and her family at this time.

The Archbishop of Canterbury said the prayers of the country were with the head of state (Image: GETTY)

The Queen celebrated her Platinum Jubilee in June (Image: GETTY)

She missed the Braemar Gathering highland games last weekend, which she usually attends each year.

Buckingham Palace has declined to give an ongoing commentary on the monarch’s health.

During the Platinum Jubilee, the Queen only travelled to Buckingham Palace twice, delighting royal fans with balcony appearances at Trooping the Colour and then the pageant finale.

Since the Covid pandemic she has mainly been based at Windsor Castle.

She spent a night in hospital last October undergoing tests before missing a string of engagements after being ordered by doctors to rest.

My prayers, and the prayers of people across the @churchofengland and the nation, are with Her Majesty The Queen today.

May God’s presence strengthen and comfort Her Majesty, her family, and those who are caring for her at Balmoral.

The Queen carried a walking stick on Tuesday (Image: PA)

In May, she missed the State Opening of Parliament due to “episodic mobility problems”, with Charles standing in with the Duke of Cambridge.

The Palace now tends to only confirm the Queen’s attendance at engagements on the day depending on how she is feeling in the morning.

The Royal Family’s website appeared to crash following the news of the Queen’s health with an error message reading: “Gateway time-out”.

Politicians took to social media today to share their well-wishes for the monarch.

The monarch made two appearances on Buckingham Palace’s balcony during the Jubilee (Image: GETTY)

Labour leader Sir Keir Starmer said: “Along with the rest of the country, I am deeply worried by the news from Buckingham Palace this afternoon.

“My thoughts are with Her Majesty the Queen and her family at this time, and I join everyone across the United Kingdom in hoping for her recovery.”

Scottish First Minister Nicola Sturgeon said: “All of us are feeling profoundly concerned at reports of Her Majesty’s health.

“My thoughts and wishes are with the Queen and all of the Royal Family at this time.”

Wales’ First Minister Mark Drakeford said he was “concerned” and added: “I send my best wishes to Her Majesty and her family on behalf of the people of Wales.”

Lib Dem leader Sir Ed Davey said: “The whole nation’s thoughts and prayers are with Her Majesty The Queen and her family as we all hope and pray for her full recovery.”

Former Tory prime minister David Cameron said he was “deeply concerned”, adding: “I send my heartfelt thoughts and prayers to Her Majesty The Queen and the Royal Family at this worrying time.”

Ex-Labour prime minister Sir Tony Blair said: “It is deeply concerning to hear today’s news from Buckingham Palace. My thoughts and prayers are with Her Majesty the Queen and her family at this worrying time.”

Commons Speaker Sir Lindsay Hoyle interrupted the speech of SNP Westminster leader Ian Blackford during the energy debate today to tell MPs: “I know I speak on behalf of the entire House when I say that we send our best wishes to Her Majesty the Queen and that she and the royal family are in our thoughts and prayers at this moment.”

He added: “If there is anything else, we will update the House accordingly.”

The Queen is the only British monarch to have celebrated the historic milestone of 70 years on the throne.