Her Majesty appears to prefer bright-coloured outfits when she undertakes public engagements rather than muted tones like beige, according to royal commentator Robert Hardman. In his biography of the Queen, the author claimed the monarch joked about not being able to wear beige.

He wrote in his book Queen of the World: “My favourite remark she ever said was, ‘I can never wear beige because nobody will know who I am’.”

While it is true the monarch favours bright colours – and in particular pink, green and blue – she has been seen wearing beige and cream outfits too.

In 2006, for example, she donned a cream coat with a matching hat for a service of thanksgiving held to mark her 80th birthday.

Six years later, she wore another cream coat, albeit presenting a beautiful jewelled decoration, during a visit to Leeds. 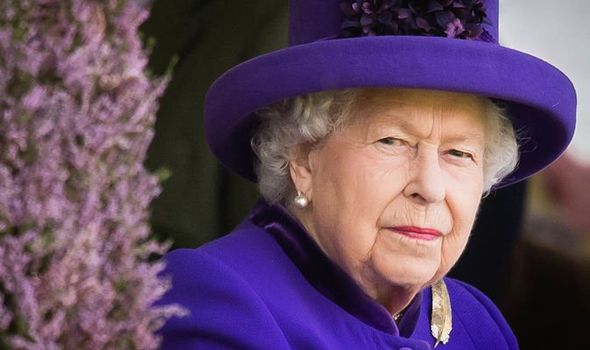 The Queen and Prince Philip marking the monarch’s 80th birthday in 2006 (Image: GETTY)

Mr Hardman’s claim was supported by the monarch’s daughter-in-law Sophie, Countess of Wessex.

In the documentary Our Queen at Ninety, the wife of Prince Edward commented on the monarch’s colourful outfits and the touching reason behind them.

She said: “Don’t forget that when she turns up somewhere, the crowds are two, three, four, 10, 15 deep, and someone wants to be able to say they saw a bit of the Queen’s hat as she went past.

“She needs to stand out for people to be able to say ‘I saw the Queen’.”

The Queen acceded to the throne in 1952 (Image: GETTY)

The Queen has carried out thousands of royal visits and engagements since she acceded to the throne in 1952.

And, prior to each engagement, her outfits are carefully planned and considered.

Stressing the Queen will make sure she can be easily spotted among the crowd, Sali Hughes, the author of Our Rainbow Queen, previously said: “She won’t attend an engagement at a grassy venue – like a racecourse or garden party – in camouflaging green.

“But she will happily deploy green to stand out where it’s needed.”

The Queen wears bright colours to be better seen by members of the public (Image: GETTY)

Speaking to Good Morning America, Ms Hughes also said: “So much thought goes into it and nothing is an accident.

“If anyone thinks they’re overthinking the Queen’s fashion, they’re not, because they would never be able to think about more than the Queen and [royal dressmaker] Angela Kelly.”

On October 20, she was due to travel to Northern Ireland for a two-day visit marking the nation’s centenary.

However, she pulled out of the trip following her doctors’ advice to rest for a few days.

It was later revealed that, on the same day, the monarch had been taken to hospital for undisclosed preliminary tests.

The Queen has since undertaken a lighter working schedule.

However, she continues to carry out her duties as a sovereign, including dealing with the Government’s red boxes and holding weekly meetings with Prime Minister Boris Johnson.

The Queen wearing green during a joint engagement with Meghan (Image: GETTY)

The Queen was last spotted in public on Sunday, when she was flown to Sandringham by helicopter.

The monarch, who spent Christmas at Windsor Castle, is now expected to remain in Norfolk until at least February 6.

The day marks the anniversary of the death of her father King George VI – as well as her accession to the throne.

This year, the date will be particularly important, as it will mark the official beginning of the Platinum Jubilee.