The acclaimed Amazon Prime Video series The Marvelous Mrs. Maisel is back up shooting the fifth and final season in New York City.

And on Tuesday the show’s star, Rachel Brosnahan, was spotted shooting some streets scenes along the sidewalk and at a bus stop.

Later, the actress flashed big beaming smiles while in character as the perky Miriam ‘Midge’ Maisel, as she sat out front of St. Patrick’s Cathedral in Midtown Manhattan. 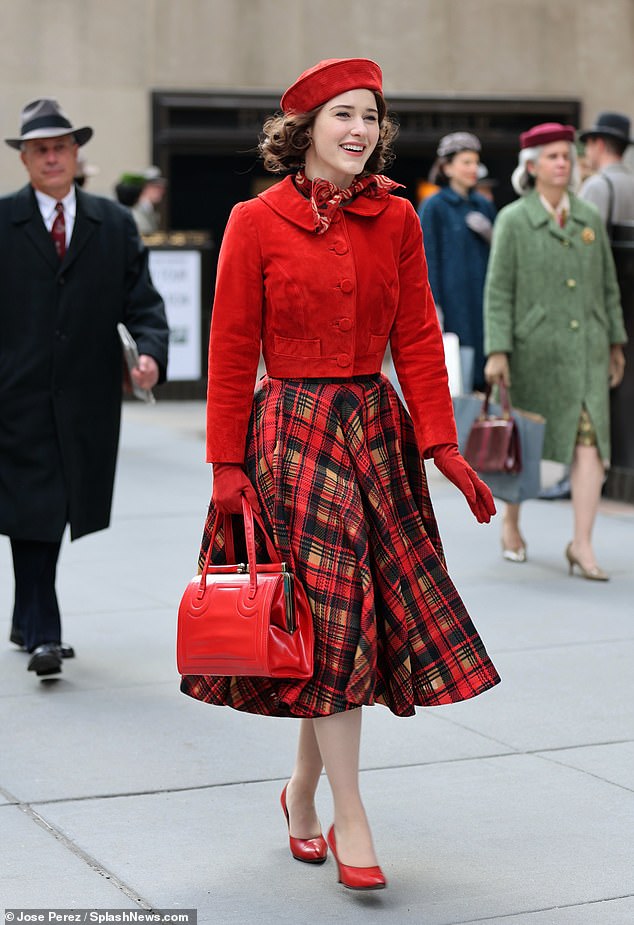 … And action!: Rachel Brosnahan, 31, was back in character as Miriam ‘Midge’ Maisel while shooting season five of The Marvelous Mrs. Maisel in New York City on Tuesday

Set in the late 1950s and early 1960s, Brosnahan, was the picture of retro fashion decked out in a striking red ensemble, consisting of a plaid skirt and cropped jacket.

Knowing that Mrs. Maisel has a keen eye for detail and color-coordinating her outfits, the costume department also included a pair of perfectly matched leather gloves and heels.

The accessories also included a red purse under her arm and a red hat over her dark brown tresses that were styled with plenty of soft curls, albeit 1960 retro.

Her overall look was rounded out with off-white stockings and of course, Mrs. Maisel’s trademark glowing and infectious smile. 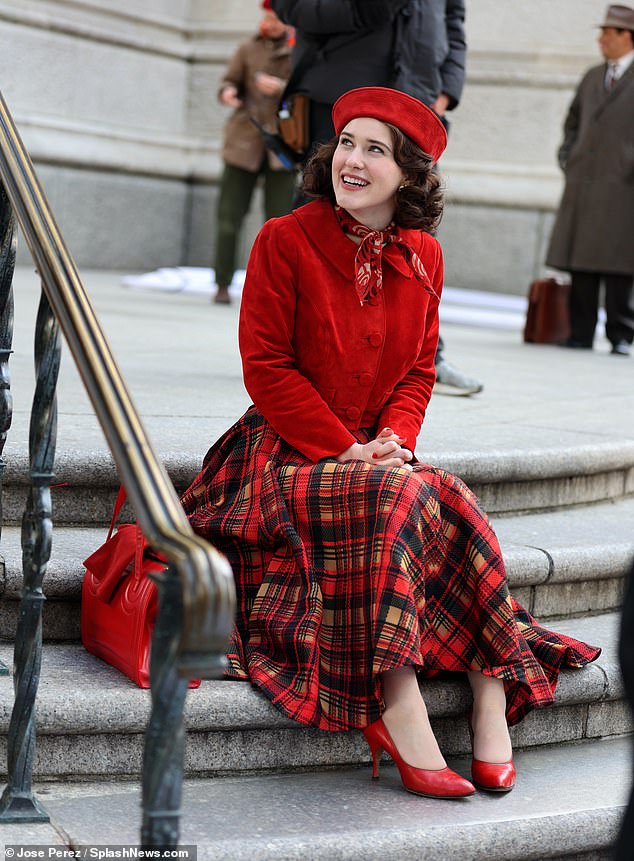 Making the NYC rounds: One of the sets for this particular episode of the Amazon Prime Video series was out in front of St. Patrick’s Cathedral in Midtown Manhattan 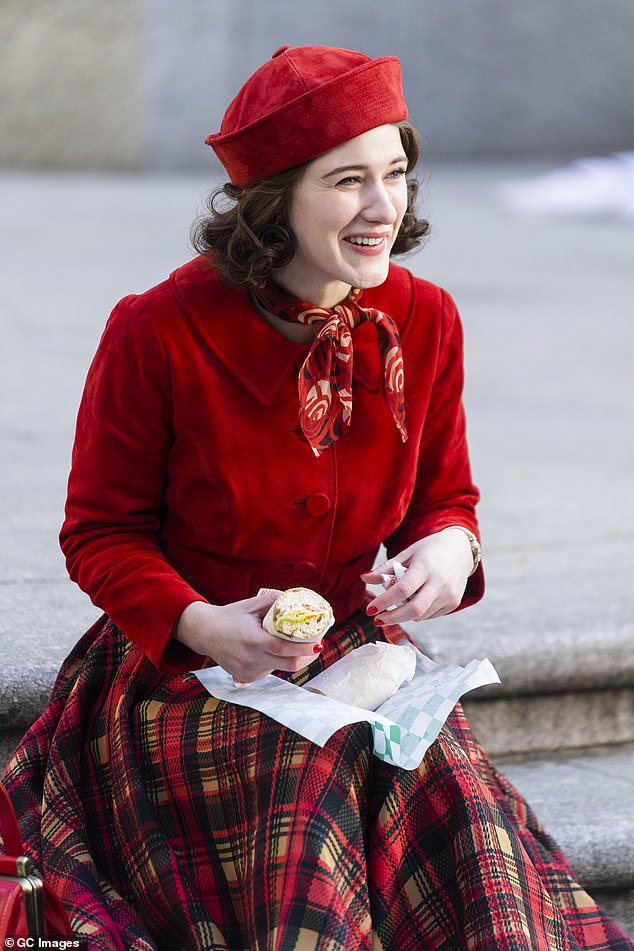 Lunch: The Wisconsin native enjoyed one of New York’s famous deli sandwiches on the set 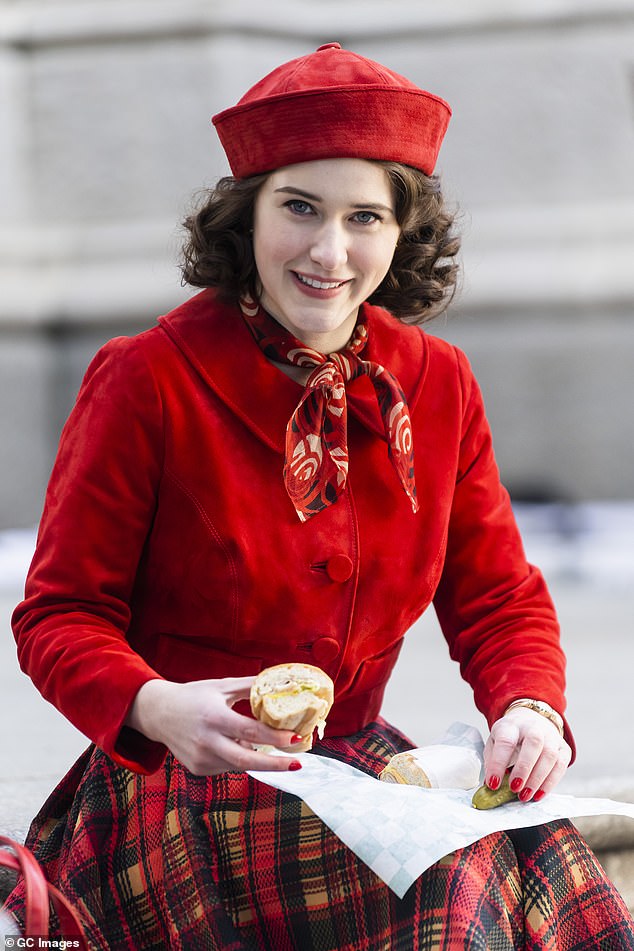 Break in action: : Wasting little time, the actress dug into her sandwich and pickle on the stairs 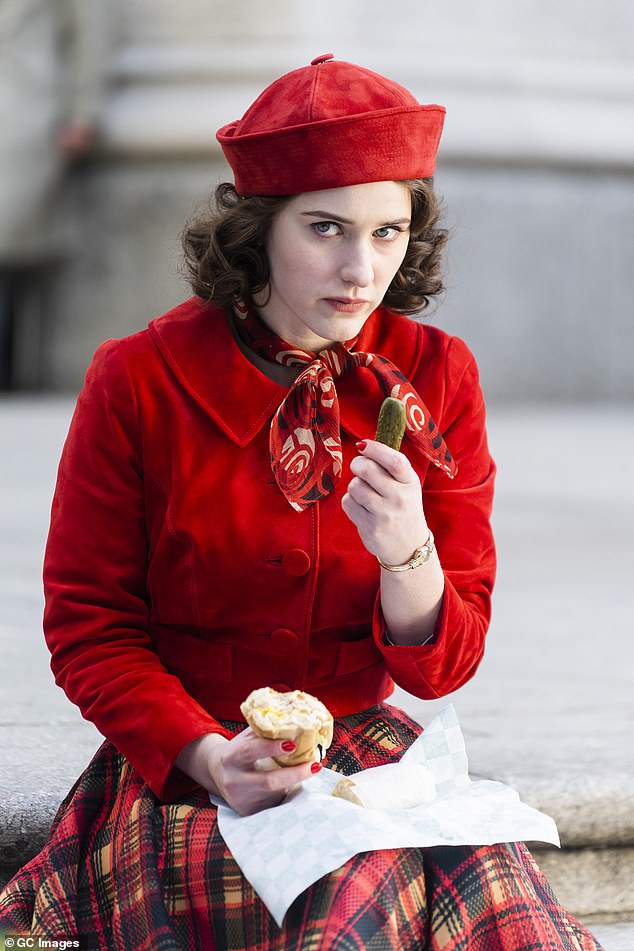 Not messing around: The actress got playful and flashed her version of a more serious face

At one point during the shoot, the actress could bee seen enjoying a classic New York City deli sandwich during her afternoon rest on a stairway, which is a short walk from the city’s famed Rockefeller Plaza.

Filming for the fourth season of the period comedy-drama series was delayed due to the COVID-19 pandemic. As a result, it would take just over two years and two months between seasons three and four.

Less than a week after its latest debut this past February 11, the show was renewed for a fifth and final season. 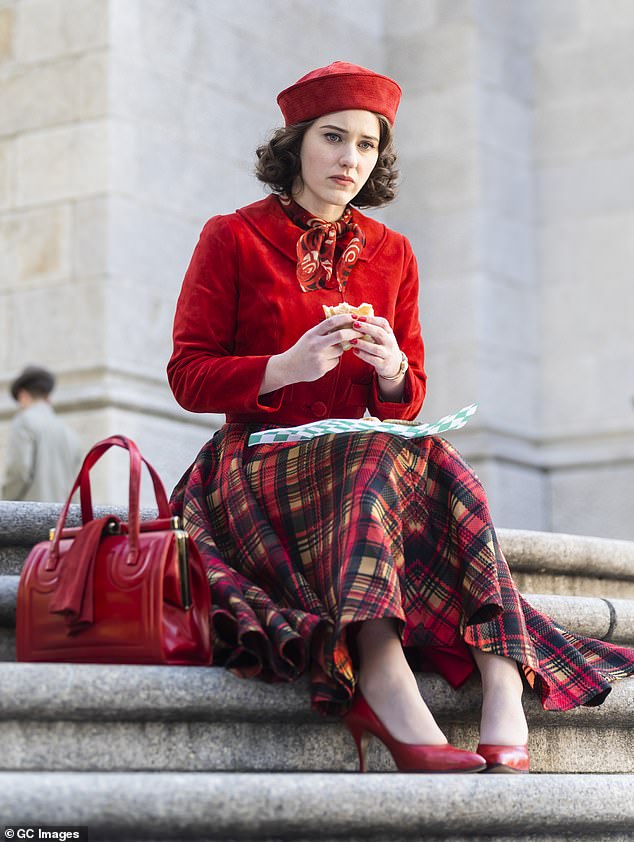 Scene meal: It appears as though the sandwich may have been used for the scene 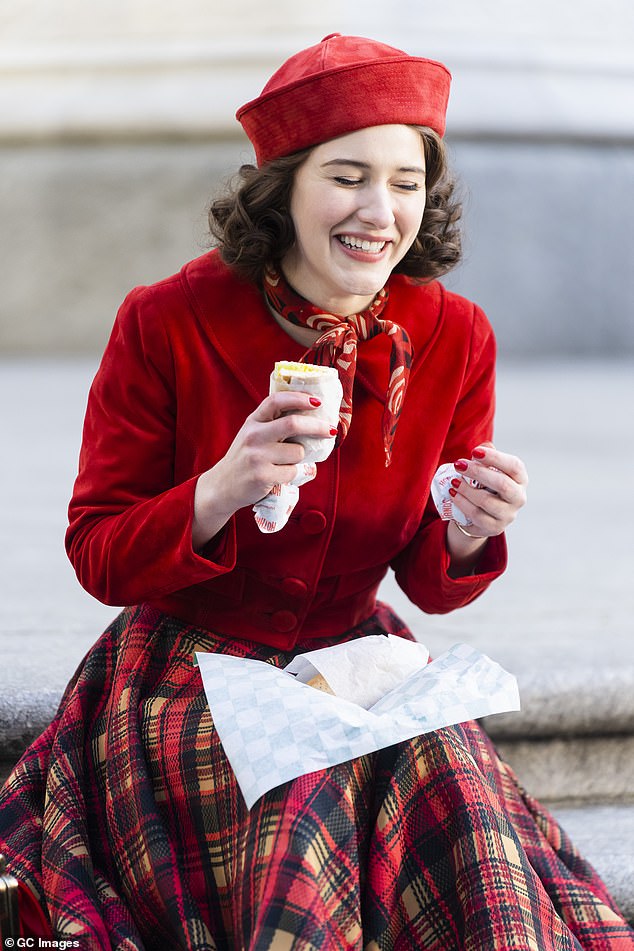 Laughs: It didn’t take long before the actress burst out into laughter 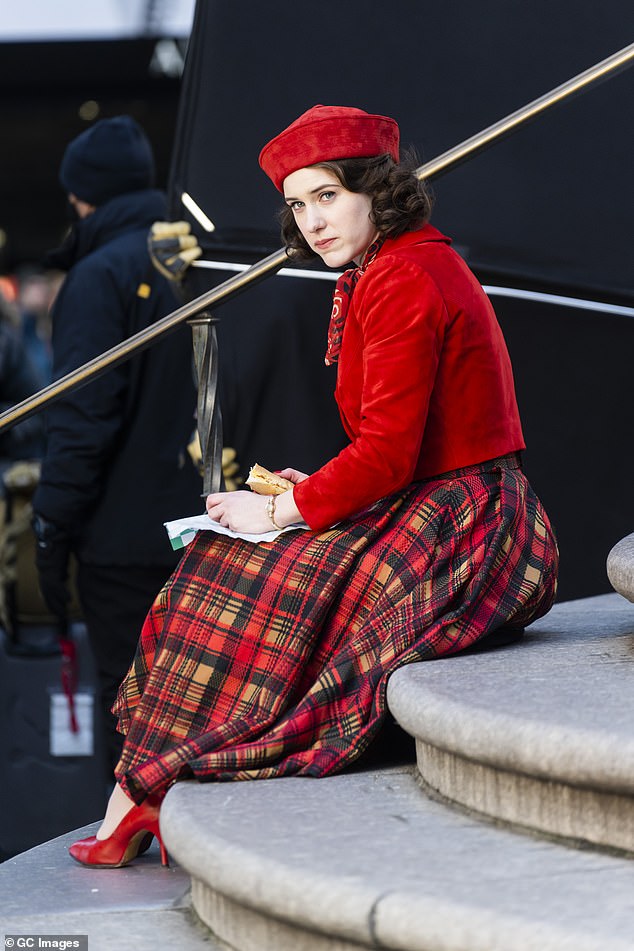 ‘Take five’: The crew for the acclaimed series appeared to be getting set up for the next scene after the direct yelled: ‘Cut’ 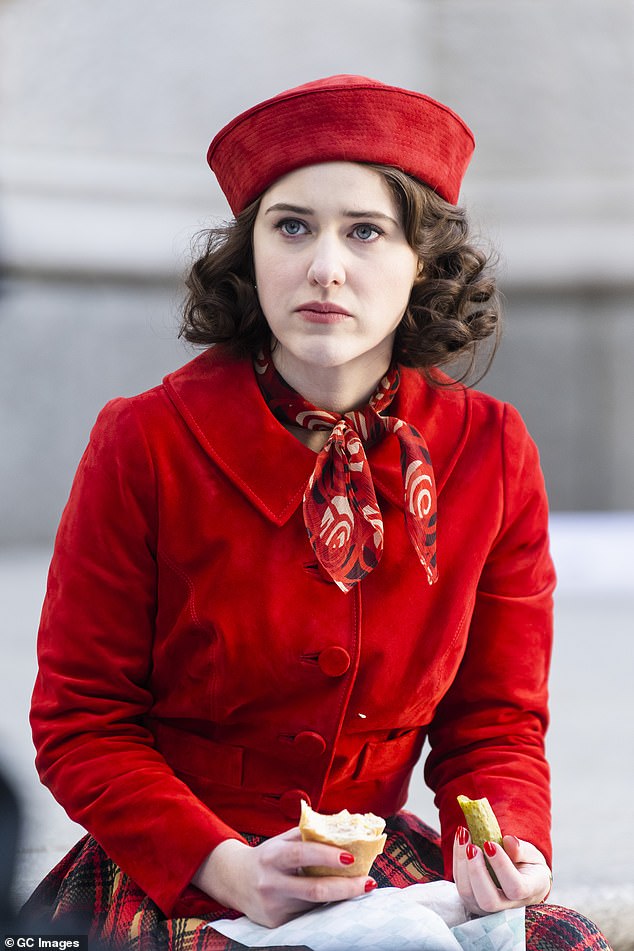 NY deli: The show has often used delis as backdrops for scenes in the first four seasons

Upon the news that Midge’s story will soon coming to an end, Brosnahan took to Instagram to share her feelings about the decision, which she called ‘bittersweet.’

‘A few days ago we started shooting Season 5 (!) of The Marvelous Mrs Maisel,’ she began in the February 17 post.

‘It’s bittersweet. The band is back together again and we can’t wait to share season 4 with you starting tomorrow…it’s also going to be our last rodeo. Rest assured our t**s are up and it’s going to be a hell of a final chapter. Stay tuned.’ 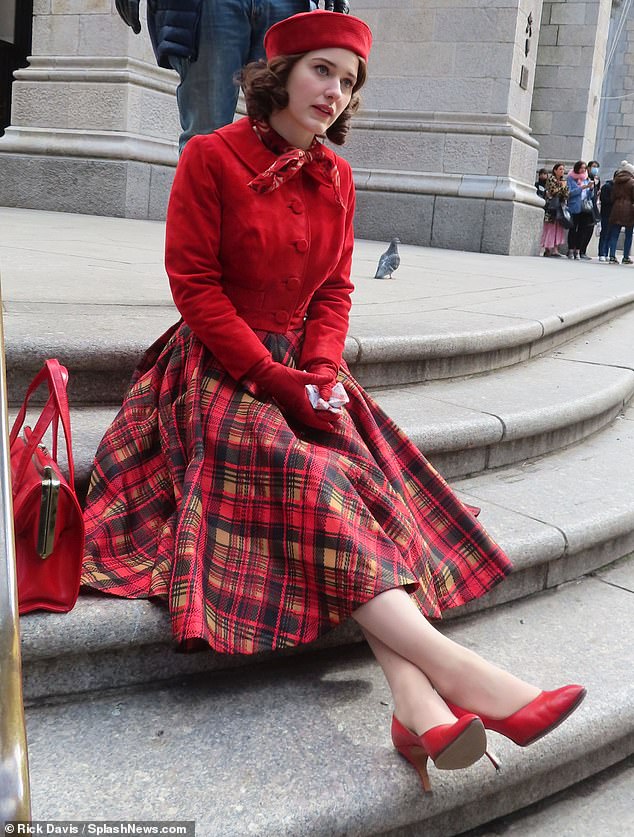 Break: After working with the crews, Brosnahan sat back and waited until filming resumed

Season five underway: The actress also shot some street scenes for the episode, which will be part of season five

The show has garnered a strong fan base and widespread critical acclaim throughout its run.

During its first three seasons it has won numerous awards, including Primetime Emmys and Golden Globes for the series, costumes, and individual acting nods for Brosnahan, Borstein, Shalhoub, among others. 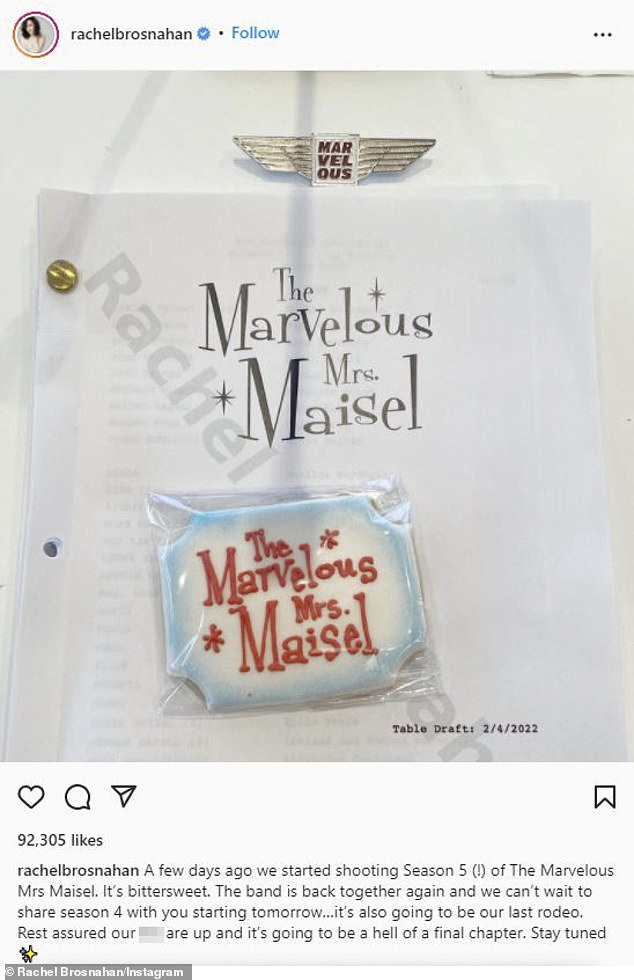 End in sight: Brosnahan called the news of the show ending after season five: ‘Bittersweet’ 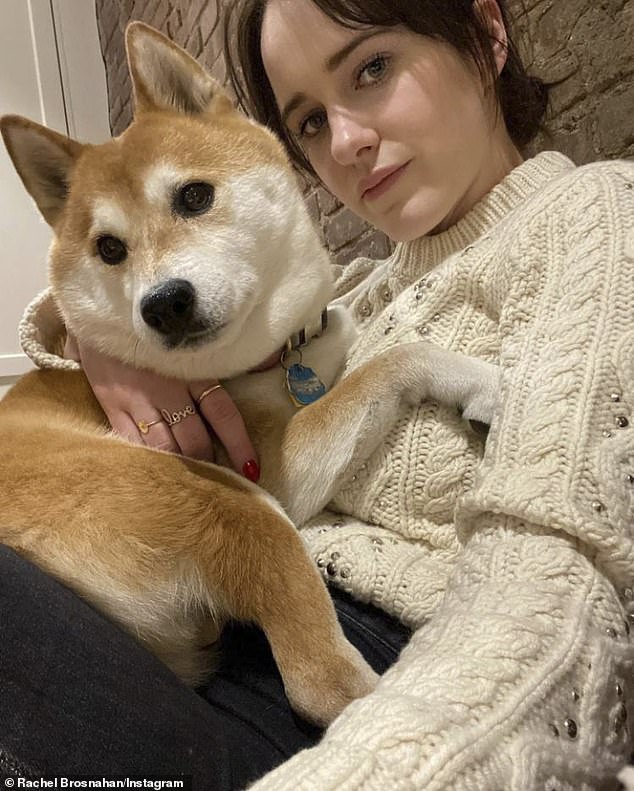 Bold promise: Brosnahan promised the upcoming finale to be ‘a hell of a final chapter’