RACHEL RICKARD STRAUS: Will Chancellor Kwasi Kwarteng’s tax cuts work? Now it’s all down to us – what will we do with our pay rises? 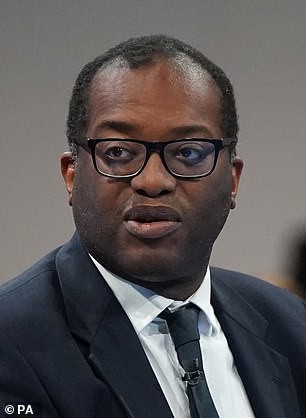 What would you do with a pay rise? It’s a question I’m sure many of us daydream about.

No doubt some of it would go on paying debts or bills, but perhaps there would be enough for a splurge as well. A holiday? Nice meals out? Redecorate?

But on Friday, the answer to what we would do with extra cash became less the stuff of idle musings – and suddenly absolutely central to economic policy. Chancellor Kwasi Kwarteng’s Budget statement made it clear that getting more money into our pockets is key to his plan to boost the economy.

He said cutting taxes – and therefore boosting pay cheques – is ‘central to solving the riddle of growth’.

He reckons that if we have to fork out less in taxes, we’ll spend more, which will get more wealth swilling around the economy and therefore bring even more into the tax coffers than just taxing more in the first place.

Conversely, if we are taxed too much, we’ll lose motivation to try to earn more, he thinks.

It is largely on these grounds that he announced a cut in the basic rate of tax to 19 per cent from April; scrapped the additional rate for high earners altogether; cut National Insurance again; and slashed a number of business rates.

In order for his plan to work, the Government needs us to spend. Money burning a hole in your pocket doesn’t create growth; it has to be out there circulating in the economy, being spent or invested.

Now simultaneously, the Bank of England is probably hoping for the very opposite.

Its mandate is not to create economic growth, but instead to tame inflation.

The Bank of England is tasked with keeping inflation around 2 per cent – currently at 9.9 per cent, it has not been very successful of late. We’ll have to see if its latest interest rate rise last week does much to help.

Spending sprees are the enemy of inflation. If we spend a lot, we increase demand and risk pushing prices up further still.

I think it’s fair to say we’re pretty caught in the middle.

But what is interesting – and terrifying – is that there is no real way to tell what will happen. In recent days, economists, politicians and commentators have been arguing over whether or not lowering taxes will boost growth. They’ll point to economic modelling, or political ideologies, or seek examples in tax-cutting sprees from the past.

But ultimately, it is down to us. And we’re an unpredictable bunch. We don’t adhere to models. We do weird things, like put money in savings when we’re in debt, buy things we know we can’t afford, help others financially when we’re struggling ourselves, and suddenly get ourselves in crazes over things like Beanie Babies or shonky cryptocurrencies.

The mood that we’re all in can make a massive difference too. A tax cut in one economic climate can have a completely different impact to the same tax cut in another.

Financial markets are obviously not totally convinced that Kwarteng’s plan will work. The value of the pound is down, the London stock market is down, the Government’s cost of borrowing is up.

But I’m not persuaded that investors are any better placed to know what we’ll do than the politicians and economists.

The pay rises will vary wildly. The lowest paid will get the least – any income boost will likely be quickly absorbed by rising bills. The highest earners will get thousands or even tens of thousands more.

It’s a risky strategy. As well as the fact that it’s unfair and risks fuelling inequality, it relies on people who already have plenty spending even more – and there are only so many holidays, nice meals and bouts of redecorating one person can manage.

So, what will we do with our pay rises?

I have a confession to make. A terrible one for a financial journalist. I have not moved my cash savings for years.

They have been sitting in an account earning diddly squat, while all the while I go on about the importance of switching to get a better deal.

But the thing is for so long, the difference between the best and worst savings accounts was a few pence. And switching is a bit of a faff.

But now, thanks to the latest interest rate rises, there are accounts out there paying four per cent. Now that has got me interested. I’m switching.