Rafael Nadal admitted he ‘felt like crying’ over Catalonia crisis: ‘My heart sank’

Djokovic ‘cleared out of the way’ for Nadal says Webster

Rafael Nadal is just two wins away from a historic 21st Grand Slam title. The Spaniard overcame medical issues to beat Canadian Denis Shapovalov and reach the Australian Open semi-finals on Tuesday morning. He needed medication for what appeared to be a stomach issue in the fourth set, but came out on top in a five-set thriller.

He faces seventh seed Matteo Berrettini for a place in the final.

Should Nadal reach Sunday’s final, which takes place at 8:30am UK time, he will earn his place in history and move one Grand Slam title clear of long-time rivals Roger Federer and Novak Djokovic.

Djokovic was deported from Australia ahead of the tournament amid a vaccination row, while Federer is recovering from a knee surgery.

While few Spaniards would disagree that Nadal is the greatest athlete in their country’s history, his political stance has been known to divide opinion from time to time. 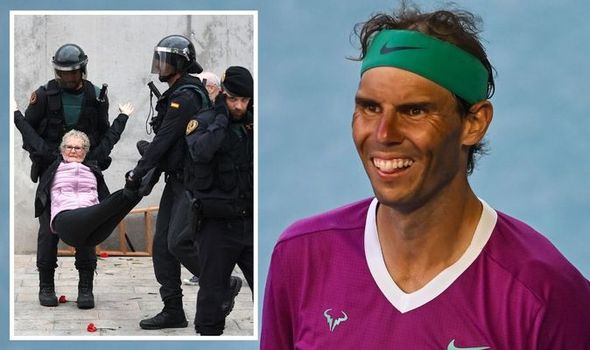 He called for a re-election in 2018 when Spanish Prime Minister Pedro Sanchez assumed power after a successful vote of no confidence was passed against previous leader Mariano Rajoy.

Nadal also offered his thoughts on the controversial Catalonian independence referendum of 2017 that divided much of Spain.

Nadal grew up in Majorca, but speaks Catalan, and condemned the referendum which was ultimately ruled illegal by the Madrid government.

Thousands of Catalans defied orders not to vote and went to the polling stations anyway, resulting in violent clashes between police and voters.

Spanish police were criticised for their treatment of the Catalans wishing to vote. (Image: GETTY)

In a press conference before the China Open in October 2017, Nadal appeared visibly moved by the images that had been broadcasted across the world.

He said: “I want to cry when I see a country where we have known to co-exist and be a good example to the rest of the world get to a situation like this.

“I think the image we have presented to the world is negative.

“It was a sad moment, my heart sank all day. Moreover, from here, at a distance, you experience it differently.”

Nadal said he ‘felt like crying’ over the images broadcasted across the world. (Image: GETTY)

He added: “I have spent many parts of my life in Catalonia, important moments, and to see society so radicalised surprises and disheartens me.”

Several high-profile Spaniards from the sporting world had voiced their opinions.

Barcelona defender Gerard Pique was considered one of the many public faces of the pro-independence camp, and tweeted support of the movement.

He had faced significant backlash from Spanish national team supporters for his views, and even offered to step back from international duty if he was proving to be too problematic.

Both Pep Guardiola and Gerard Pique voiced their opinion for independence. (Image: GETTY)

In a tearful interview with Marca on the day of the referendum, he said: “If any directors or if the Spanish FA believe that I could be a problem or annoy the national team then I am willing to step aside.

“I am proud of the Catalan people. This has been my worst experience.”

Ultimately, he did not step aside, and continued to play for La Roja until he retired from international football in 2018.

As videos of police brutality swept across the world, Guardiola said: “Spain will try to cover up the reality, but the rest of the world’s media will show it.

“I read in El Pais that they were saying it was the police officers who were injured. Injured by what? By votes?”

Rafael Nadal faces Italian player Matteo Berrettini in the Australian Open semi-final on Thursday. Coverage will be available on Eurosport and Amazon Prime.